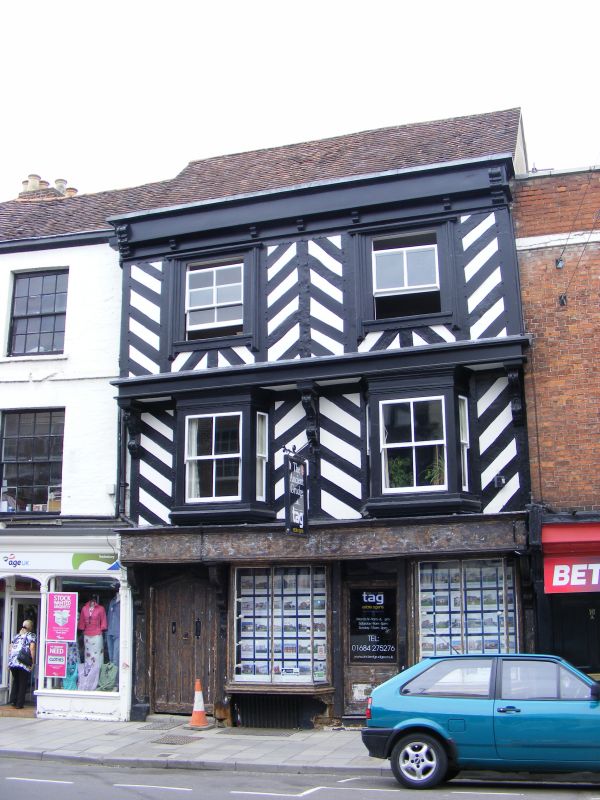 Former hotel and cafe, empty at time of survey (November
1991). Late C16 refronting of early C16 house. Close-studded
timber-frame with herring-bone strutting, plaster panels, tile
roof, brick stack.
PLAN: the double-jettied front block has the roof parallel
with the street, a throughway to the left, and a long wing
rear service/hall to the right, with a half-hipped outer
gable.
EXTERIOR: 3 storeys and basement, 2-windowed. At second floor
are 4-pane sashes in raised moulded jambs and head, with a
small single light on the return to the left. At first floor,
under a jetty, are slightly canted oriels with 2:4:2-pane
sashes.
The ground floor has a C19 shop front in 2 canted bays with
sashes, on moulded cills, and a central part-glazed 2-panel
door with a shallow transom-light. To the left is an early
plank door with vertical battens in a 4-centred timber head
and spandrels with carved dragon or lion figures, on a stone
step.
At first and second floors the jetty is carried on 3
decorative consoles, with a plain bressumer fascia and top
mould. Above the second-floor windows is a fascia band with
brackets to a deep entablature or blocking to a moulded
parapet, all in timber, and containing a concealed gutter.
The main roof, visible from the street, is in poor condition,
with loose tiles, at the time of survey. A lofty brick eaves
stack to the rear eaves, to the right.
The wing is in timber-framing with brick nogging, and with
tile roof, but on the S side the former jetty has been
underbuilt in brick. At the junction of this wing with the
back of the main building, which is here in small-panel
framing with rendering, is, at first floor, a canted section
joining the 2 parts. A raking 2-light dormer, and at first
floor a wide 2-light casement. In the gable is an early
4-light casement.
INTERIOR: not accessible, but previous list notes doors with
linenfold panelling, and fine carved moulded ceiling beams.
SR Jones (VCH) notes c1530 moulded beams to ground-floor front
room, with ceiling boss carved with Agnus Dei, 4-centred
moulded fireplace with initials RB and fragments of linenfold
panelling. Rear wing may have been divided into hall and
service rooms.
An early and architecturally distinguished example, in West
Midlands carpentry school style, of the refrontings which were
a characteristic feature of Tewkesbury c1570-1670.
(Victoria County History: Gloucestershire: London: 1968-:
130).