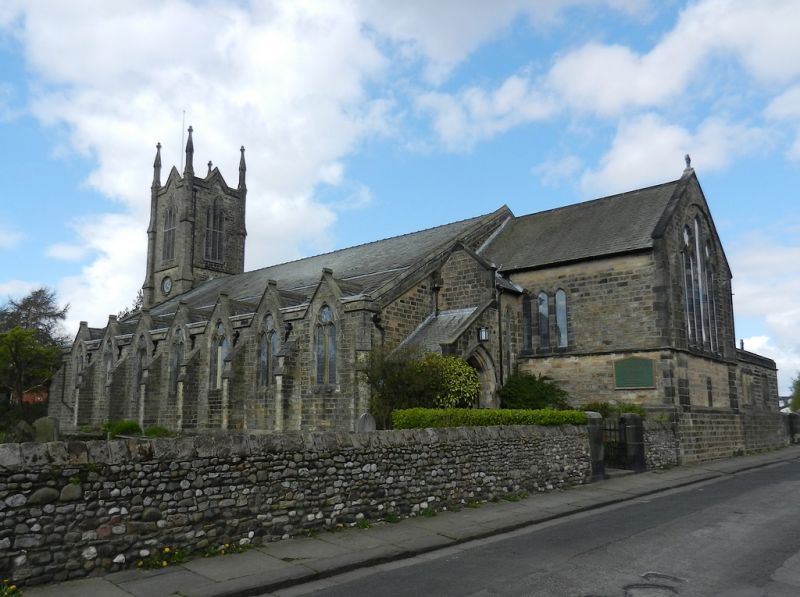 Church. 1841 by Edmund Sharpe, with south aisle added 1866.
Squared coursed sandstone with green slate roof.
Comprises a west tower, nave, south aisle, and lower chancel.
On the north side is a transept, with a lower vestry in the
angle with the chancel. In the angle between the main church
and the chancel on the south side is a short gabled projection
and a lean-to porch.
The tower is of 3 storeys with clasping buttresses and corner
pinnacles and has a pointed west doorway. Above are 3 narrow
lancets. There are clock faces on the west and south sides.
The bell openings are triple stepped lancets, with the
parapets rising in a triangle above.
The north wall of the nave is of 6 bays separated by
buttresses and has paired lancets. The south wall is of 7 bays
separated by buttresses and has windows of 2 pointed lights
with foiled circles over, with the parapet rising as a coping
to form a gable over each window. The east window is of 5
lancet lights with the tall central light flanked by foiled
circles.
The interior has exposed bolted queen post trusses ceiled at
collar level, the south wallplate carried on a 7-bay arcade of
slender timber octaonal columns with caps and bases and with
curved braces rising to the plate. The west gallery has a
panelled front and an organ which appears to have a C20 casing
with re-set Royal arms. The chancel, which may be of a later
date than the nave, has a pointed sandstone arch flanked by
narrower arches, and an open timber roof with collars and
arch-braced tie beams.
(178; Bingham R K: Lost Resort?: 99).