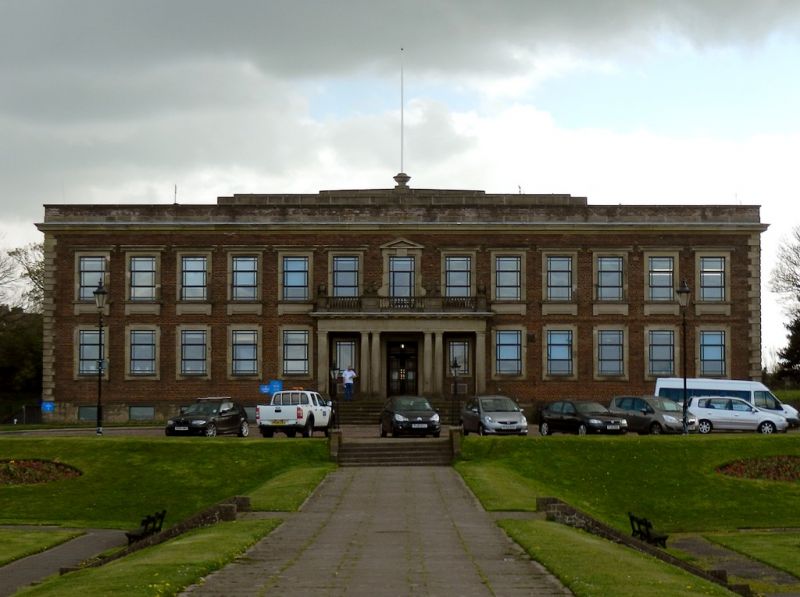 The building of the new Town Hall was made possible by funding from the Unemployment Grants Committee and planning began in 1930. The work cost over £40,000 and the foundation stone was laid by the then Mayor Councillor J.S.Cordingley, J.P., on 12th August 1931. Heating was on the low pressure hot water system with a gas-fired boiler.
The design team for the facade was father and son, Alfred and Kenneth Cross, with C. Sutton. The RIBA records show that Kenneth Cross [d.1968] worked extensively for local authorities in London [including Westminster, Marylebone, Finsbury, Finchley and Inslington] and for Bournmouth and Newcastle-on-Tyne. He was an expert in the design of indoor swimming baths and wrote two books on public baths. He also designed for the Barbers' Company, the Grocers' Company, the Whitgift Foundation, St John's College, Cambridge, Plymouth Commercial Bakery, and Barclays Bank.
Morecambe and Heysham Municipal buildings were illustrated in The Builder, August 19th 1932 and obituaries of Kenneth Cross, who was President of the RIBA, are in The Times, Building magazine 26th January 1968, p.98; and the RIBA Journal volume 75, 1968.