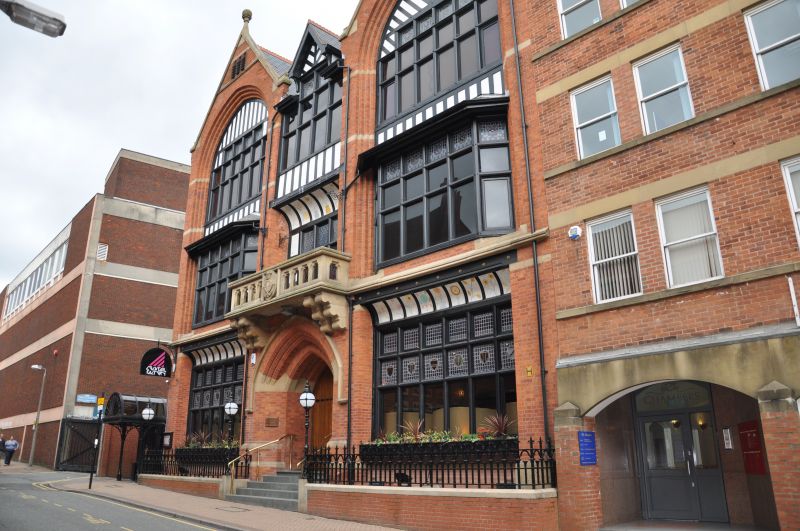 Conservative club. 1877-78, by Garlick, Park & Sykes; altered.
Red brick in Flemish bond, with sandstone dressings, some
applied half-timbering and pargetting, slate roof. Rectangular
plan formed by front range parallel to street with full-width
back extension. Free neo-Elizabethan style. Three storeys over
cellars, 3 unequal gabled bays (the centre narrower),
symmetrical. The facade is dominated by the wider outer bays,
which are in the form of giant 4-centred arches rising into
the gables, with stepped chamfer above ground floor, and by a
very emphatic entrance in the centre. The entrance bay has a
large chamfered and moulded segmental-pointed archway with a
hoodmould, a deeply recessed doorway up steps, and a stone
arcaded balcony above, on large coupled brackets; above this,
a recessed mullion-and-transom window under pargetted coving,
and at 2nd floor a similar window rising into a gablet with
projecting verges. The outer bays have full-width
mullion-and-transom windows on each floor, all with 2
transoms, those at ground floor recessed under pargetted
coving, and those at 1st floor canted oriels with pentice
roofs. All these windows have leaded stained glass in the
upper lights. Basement areas protected by cast-iron twisted
railings with fleur-de-lys heads, including 2 lamp-standards
at corners of entrance; foundation stone at right-hand end
ofbasement, laid by Edward Hermon MP (proprietor of Horrocks,
Crewdson & Co, cotton manufacturers). History: established by
traditional leaders of Conservatism in the town in defensive
response to growth of Conservative Working Mens clubs. See
also Central Conservative Club, Church Street.