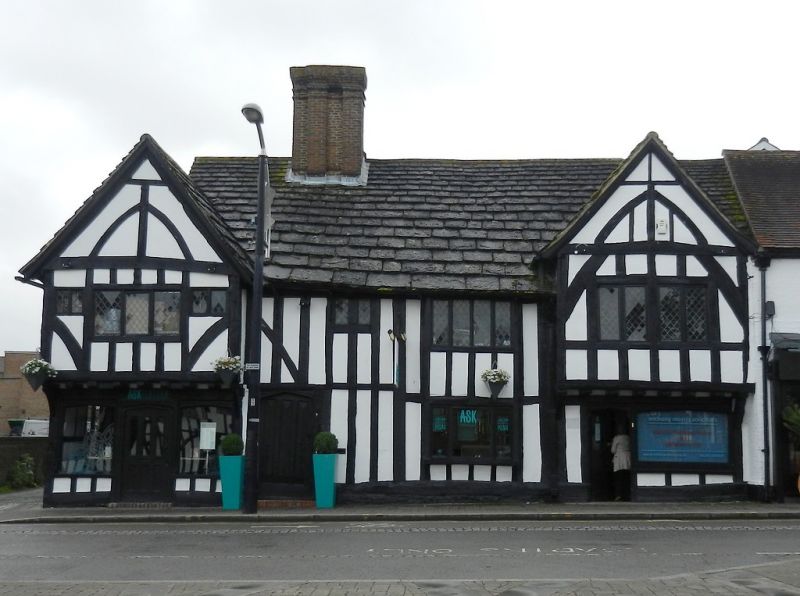 HIGH STREET
1.
5403 (east side)
No 49 and No 51
The Ancient Priors
(Minters Restaurant
A Louis Coiffeur)
(formerly listed as
No 47, The Square)
TQ 2636 NE 5/24 21.6.48
II* GV
2.
Timber-framed hall-house of circa 1450 with L-wing added circa 1530 and modern brick wing
later. Restored in 1927. Two storeys timber-framed with Horsham slab roof. Four bays.
Front elevation has projecting first floors on brackets with gables above with decorative
curved braces. Front elevation mainly close-studded. Side elevation square framing.
Modern casement windows but blocked original window openings remain. Later shopfronts.
Doorcase has a flat arch with shield in spandrels. On one of these is a crown of
antique shape, 2 fleur de lys seen sideways, a third in the middle and a leaf between.
The hall runs north to south with a solar and chamber beneath it either end.
The hall is 23ft long of 2 bays, each about 10ft long. Open timber
roof with cambered tie beam, arch-braced collar beam, moulded wall plates and curved
mid-braces. A chimney and floor were inserted in the C16. Two C16 stone fireplaces
in the ground and first floor rooms at the north end. A 2-storey wing, probably a
kitchen wing of about 1530 projects eastward from the south end. Two staircases,
are hung a heavy Jacobean rail with turned balusters. A complete and well-preserved
example of a C15 hall-house. This may have been the Pre-Reformation Priest's house.
Reputed connexions with smuggling.
(See V C H Sussex vii 144.
Sussex Archaeological Collections Vol LV (1912) pp 12-16).