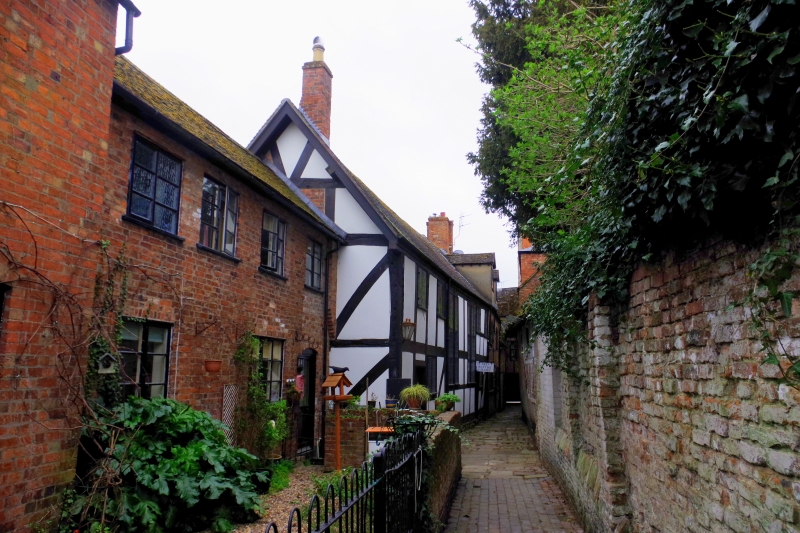 Formerly known as: Baptist Chapel CHURCH STREET.
Former Baptist Chapel, now information and display area. Late
C15, adapted for chapel use c1690 and 'modernised' in c1720;
substantially restored c1980. Square panel timber-frame with
tension bracing, plaster infill, tile roof. An original hall
house adapted for chapel use, and restored to the supposed
state of c1720; a single space, with galleries on 3 sides, and
a partitioned-off minister's room.
To the court in heavily restored framing on small stone plinth
are 4 two-light casements with leading at first floor and 2 at
ground floor; at centre are 2 full height 2+1 light multi-pane
casements with a central structural post. Far left is 6-panel
flush-beaded door, and at right end a similar door in moulded
surround. At outer end the timber-framed gable partly
concealed by adjacent brick cottages.
INTERIOR is one large space with gallery on 3 sides, plastered
segmental barrel ceiling, with 5 exposed tie-rods, exposed
framing to walls. Galleries, approached by C20 staircases,
supported on slender turned Doric columns to very high
plinths, carrying heavy beam on brackets at street end, and
very heavy stopped-chamfer beam at west (burial ground) end,
panelled gallery fronts. At west end first floor the former
minister's room enclosed by partition, and with fireplace.
Good stained and grained pulpit with dentilled cornice and
back board, centre of Court side, a few early benches.
A new larger Baptist Chapel opened in 1805, and the old
building sub-divided into 2 cottages, with remains of the
Chapel between. Rear balcony may have been added in 1905.
The whole was acquired by Tewkesbury Borough Council in 1976,
and restored to its present condition at a cost of »116,000,
including HBC grant of »44,000. The structure is now primarily
of historical interest.
(Nonconformist Chapels and Meeting-houses: Stell C:
Gloucestershire: London: 1986-: 98; The Old Baptist Chapel,
Tewkesbury: Story of its Development...: Tewkesbury: 1970-;
Victoria County History: Gloucestershire: London: 1968-: 163).