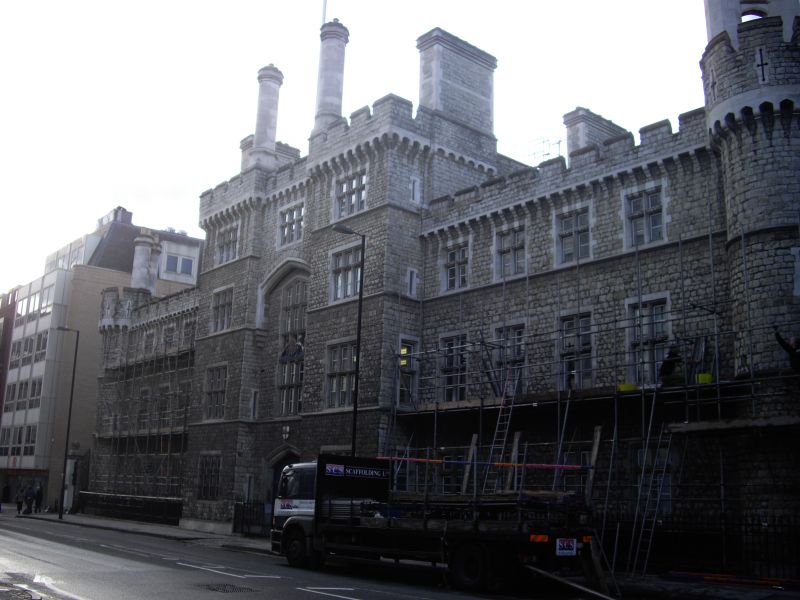 Barrack buildings for the Honourable Artillery Company. 1857.
By Joseph A. Jennings. Dressed stone with ashlar dressings,
roof obscured by parapet. Three and four storeys over
basement, eleven-window range to City Road. The building is
castellated in style, with Tudor details. Projecting
centrepiece of three bays, designed as two four-storey towers
flanking the entrance, with wings of four bays on either side,
terminating in corner towers. The central
segmental-pointed-arched entrance, with two-storey
mullioned-and-transomed segmental-pointed-arched window over,
is set in a recess in the centrepiece under a similar arch;
the middle stage of the window consists of blank panels with
carved coat of arms. For the rest, the windows are all
flat-arched and generally of two and three lights, bartizans
to the corner towers, the centrepiece and bartizans
machicolated, the ranges between corbelled. In addition to the
common chimneystacks which are rectangular in plan, there are
two to the centrepiece and linked pairs to each of the corner
towers which are octagonal and faced with ashlar. The north
and south returns continue the elevational treatment, with an
eight-window range to the north and seven-window range to the
south; except that at the fourth bay the front is recessed in
plan on a chamfer and the parapet ceases to be embattled, and
that the window details are simpler. Cast-iron railings and
gates with double rail, coat of arms of the Honourable
Artillery Company on the standards, and spearhead finials.