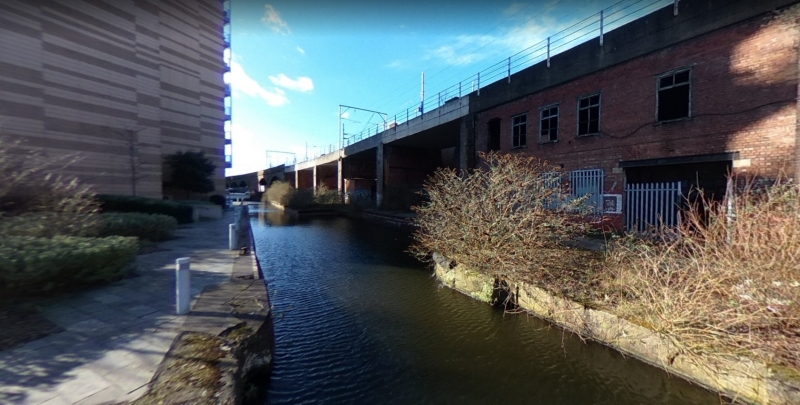 A branch canal of 1838 with modifications of 1962, comprising a canal arm and lock constructed in a combination of coursed sandstone masonry and brick with mass concrete.

PLAN: an east-west canal arm with a passing pound, with a turning basin to the west leading to a north-south lock to the north. The Hulme Lock Branch Canal links the Bridgewater Canal with the River Medlock at the point where it meets the River Irwell.

CANAL ARM WITH PASSING POUND: the branch canal meets the Bridgewater Canal at an acute angle, forming a rounded ended promontory between the two, with three metal mooring bollards; both are still in water. The side wall of the Bridgewater Canal is coffered with steel with a timber coping above, and concrete to the walls and surface of the tip of the promontory. Approximately two metres from the tip of the promontory is a pair of lock gates, fixed open; these are of oak with steel sweeps. From here the promontory surfacing changes to sandstone flags. The side walls of the junction lock, which is approximately four metres wide, are of squared sandstone blocks. Approximately eight metres from the gates the top course of the left wall returns at ninety degrees to follow the outline of the sunken emplacement for a former swing bridge; the recess is blocked with concrete at the water’s edge. Beyond this, recesses in both walls mark the former location of the inner lock gates. From here the walls change to engineering bricks with bullnose copings. Approximately thirty five metres from the entrance the arm widens to form a passing pound on the right hand side, twenty five metres in length and four metres wide.

LOCK AND GATES: in the far right corner a lock leads off to the right, underneath the arches of two parallel railway viaducts. There is a closed set of timber lock gates at the entrance, where the walls change back to engineering brick with bullnose copings, with recesses to accommodate the gates when open. The gates are painted timber with rolled steel sweeps and cast iron balances. This lock has a fall of approximately three and a half metres, and the bottom third of this is walled in squared sandstone blocks with engineering brick above and bullnose brick copings. The outer gates are half open and of the same design as the inner gates. The lock walls terminate with rounded ends topped with metal safety railings.

SUBSIDIARY FEATURES: Outside the outer gates a steel bridge spans the lock, while inside them a steel gantry oversails with a mobile attaching point; this is reportedly lifting gear from the 1962 alterations, left in situ. Metal ratcheted winches for closing the outer gates are found on both sides of the lock, but for the inner gates only the left hand one is extant. These form part of the listed building.

The Hulme Lock Branch Canal was constructed in 1838 to provide a link between the Mersey and Irwell Navigation (completed c.1734) and the Bridgewater Canal (completed c.1765), and hence open up connections with the Rochdale Canal (commenced 1794) on the eastern side of the city.

In spite of the developing network of canals around Manchester, the lack of a direct link between the Mersey and Irwell Navigation and the Rochdale Canal meant that goods using both waterways had to be offloaded onto carts and carried across the city before being loaded back onto boats to continue their journey. This was costly and time-consuming, as well as a cause of congestion in the central streets. Proposals were made as early as 1799 but the canal wasn’t commenced until 1838, after the Mersey and Irwell Navigation Company began their own Manchester and Salford Junction Canal for the same purpose. The Bridgewater Canal Company’s Hulme Lock Branch Canal, connecting their canal with the River Irwell at the point where the two waterways were at their closest, was shorter and opened the year before the Manchester and Salford. The two operated side by side until they came into the same ownership and the Junction canal was closed in 1922.

When it was first constructed, the branch canal included three locks, each having a height of 1.2m, between which there were passing basins. Two of the three locks were situated running parallel with the Bridgewater Canal, with a turning basin to the west and third lock at ninety degrees that discharged into the canalised River Medlock as it joined the River Irwell. In the early C20 a swing bridge was added over the lock nearest to the Bridgewater Canal, pivoting on the south side.

The Bridgewater Canal was acquired by the Manchester Ship Canal Company. In the early 1960s, with the canal being heavily used for grain traffic from the docks to the Kellogg’s factory at Trafford Park, the company replaced the three original locks with a single lock of around 3.6 metres lift. The canal and basin walls were increased in height in brick and concrete where necessary, and all but one pair of the former lock gates were removed. The stone walls and copings to the canal and basin mostly remain, although some sections of stonework were removed. The stone copings were chased out to receive the brick footings for the new retaining walls. One set of gates survived the alterations, which is situated at the junction with the Bridgewater Canal. This may have some original elements, but its fabric is mostly mid-late C20. It is fixed open, not having been used since the modifications took place.

The new retaining walls were constructed with an outer face of engineering bricks, which acted as shuttering to the mass concrete poured behind in lifts of 800mm. The brick wall footings were chased out of the masonry coping stones into which were driven 35mm dowel keys, and galvanised iron ties were fixed between brickwork and concrete and between successive lifts of concrete. The walls were finished with copings consisting of bullnose bricks on edge. The canal basin had a new wall cut out of the sandstone, surmounted by a reinforced concrete coping.

The new lock gates were built in the company’s mechanical engineer’s workshops. They were constructed of oak with greenheart heel and mitre posts, and each gate was provided with two hand-operated paddles. The sweeps consisted of rolled steel sections with cast iron balanced weights. Channels were cut in the existing masonry and built in the new brick walls to accommodate the paddle operating gear. The lock was opened to traffic at the beginning of December 1962.

In 1994 the Manchester Ship Canal was acquired by Peel Holdings. Hulme Lock Branch Canal was used until 1995. Since then it has not been navigable, although it serves a function as part of the water level control system within the canal network.

The Hulme Lock Branch Canal of 1838 is listed at Grade II for the following principal reasons:

*Historical importance: this branch canal formed an important, and from 1922 to 1995 the only, connection between major commercial waterways, part of a significant transport network which contributed to the success of Manchester as a major centre of the industrial revolution at an international level. Its rapid construction in response to the commencement of a rival venture demonstrates the commercial competition and entrepreneurial spirit of the time.
*Intactness: the survival of the original route, original lock pounds (now only partly visible) and an early pair of lock gates at the Bridgewater Canal entrance comprise a good degree of intactness.
*Later additions: the 1962 additions illustrate an evolution in the canal network required for continuing commercial viability in the C20.