A Grade I Listed Building in Tideswell, Derbyshire 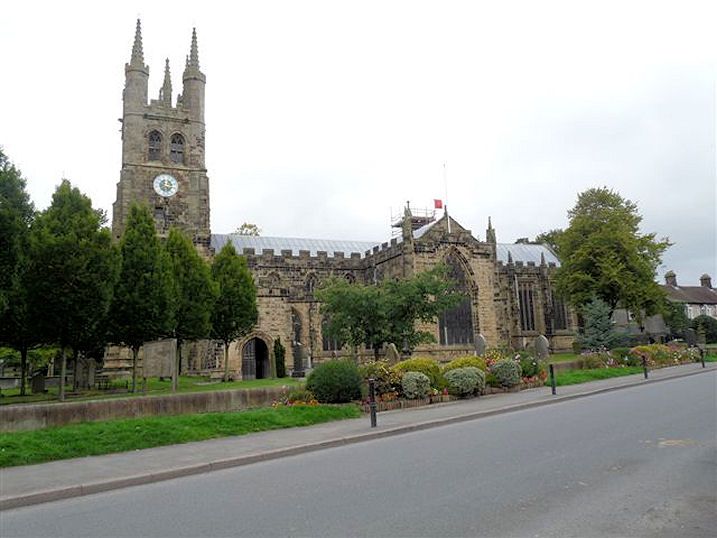 Two-stage tower with angle buttresses to first stage, bell stage with embattled
parapet. Octagonal corner towers with crocketed pinnacles, and between towers,
crocketed pinnacles rise from parapet. Bell stage has coupled pointed arched
opening with transomed Y-tracery below hoodmoulds. Shallow corbel-table above
window heads has moulded string course above, surmounted by parapet. Tall Perp
5-light west window with panel tracery above west door, with pointed arched head.
Small rectangular lights to upper part of first stage and clock to south wall.
Two-storey porch with diagonal stepped buttresses, pointed arched doorway with
hoodmould and embattled parapet above moulded string course. Narrow lancets light
first floor. North and south aisles of four bays rise from triple-stepped plinth
which continues around the building. Aisle windows of three lights with curvilinear
tracery with moulded string course and embattled parapet above. Aisle bays delineated
by stepped buttresses terminating at the string course. Three-light clerestory windows
of two lights with ogee heads supporting a quatrefoil, beneath a hoodmould.
String course above, and embattled parapet. North and south transepts, each of two bays,
with stepped diagonal buttresses and pinnacles. Parapets with embattled centres,
behind which rise the coped gables of the transepts. Tall, 5-light north and south
windows with hoodmoulds and carved stops, and side wall windows of three lights, all
with bold curvilinear tracery. Four-bay chancel with tall straight-headed 3-light
windows, nearly Perp, but with quatrefoils on trefoils which link the mullions.
These windows clearly post date the flowing tracery of the transepts, but appear
contemporary with the curvilinear tracery of the tall east window. The chancel
bays are defined by stepped buttresses, those to the south wall with pinnacles and
blind tracery to buttress faces. Almost semicircular headed priests doorway with
planked and studded door to south wall, and niches to south transept buttresses.
Pointed arched doorway to north aisle with panelled oak door and hoodmould which
rises from the upper-most moulding of the stepped plinth.

One of the most important of the county's medieval parish
churches in which the development of the Decorated style and the emergence of the
Perpendicular Style in Derbyshire is clearly illustrated.