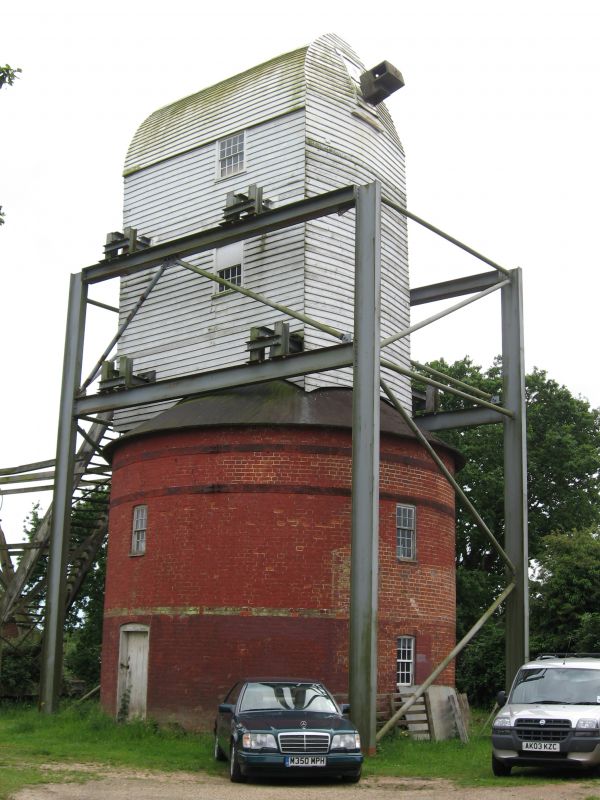 A post mill, built 1812, raised by the addition of a brick roundhouse and altered in approximately 1872, with maintenance and structural work undertaken in the late C20 and early C21.

A post mill, built 1812 by John Collins, millwright of Ipswich, raised by the addition of a taller brick roundhouse and altered in approximately 1872 by Joshua Reynolds, with maintenance and structural work undertaken in the late C20 and early C21.

EXTERIOR: the roundhouse of c1872 is constructed in brick laid in Flemish bond, with iron strapping around its circumference. The roof is conical and has a late C20 waterproof covering. There are ground floor entrances on the north-east and south-west sides, both with boarded doors, and a boarded taking-in door on the 1st floor of the south-east side. Six-over-six sash windows punctuate the roundhouse.

The timber-framed buck is clad with replaced weatherboarding. It has an arched roof form.The breast, or front wall of the buck is curved, and the cast-iron canister for the sail-stocks projects at a high level. There are windows on the north-east, south-west and south-east elevations (in its current, static position); an entrance door with a projecting, arched hood is accessed from the steps to the south-east. The steps date to the 1870s, when the buck was raised, and a new fantail was constructed to automatically turn the buck to face the wind. The steps are joined by horizontal timbers to the fantail structure; the timber is in a poor condition, but the shafts gearing, bearings and wheels are all in place. The main sails, fantail blades and the wooden track around the roundhouse on which the fantail wheels ran no longer survive. It is understood that some of the shutters to the main sails, patented by William Cubitt, and the iron rods and linkages which controlled them, are stored on site.

INTERIOR: the roundhouse walls have regular curved piers on which rest the trestle comprising two cross trees and four quarter bars supporting the main post; the timbers probably date to 1812 and are finely crafted and detailed. The last wooden desk or till is attached to the wall at the ground floor of the roundhouse.

The buck housed three pairs of stones, none of which remain on site. In general some of the studs, posts and braces are well finished on the side and tail frame at each level; many are neatly chamfered with run-out stops. A good proportion of timbers are probably original, but there has been piecemeal renewal; similarly the floor frames appear to retain early C19 timbers. Much machinery remains including the cast-iron windshaft, tail wheel, 2 upright shafts and 2 great spur wheels. The wooden brake-wheel and brake are intact.The final drive to the head stones survives in the mill but is not in situ.

On the lowest level of the buck is the post, strapped with iron to prevent the wood from splitting with a greased bearing on top, surmounted by the crown tree. Above is the millstone floor where the position of the stones is apparent; a system of pulleys and chutes enabling the corn and flour to be processed remains. The tail-wheel and wallower to the tail stones, the drive shafts and the flour dresser remain. At the third floor, the windshaft taking the power from the sails carries the brake-wheel, and has a belt drive to the sack hoist. There are three intact bins which fed the stones below on the second floor.

Land on which the present mill stands was bought by William Scarlett in 1811 for £15, and sold in 1812 when the land is described as ‘…upon which a post windmill hath lately been erected’. It is said to have been built by John Collins, millwright of Woodbridge Road, Ipswich, i.e. framed up in his yard and erected at Friston. John Collins is described as a Master Millwright in the 1851 Census and would have been aged 27 in 1812 when the mill was built. The mill was bought by Joseph Collings of Bramfield, wheelwright, for £41 10s. It was sold again in 1813 to John Wells of Halesworth, shoemaker, for £40, and again in 1814 to George Whiting of Knodishall, gentleman, for £40. George Whiting died in 1822 and the following year the property was sold again, to Charles Gildersleeves of Aldeburgh, miller, for £420. Gildersleeves sold in 1837 to Joshua Reynolds, miller, who may have been the mill’s tenant at the time.

A surviving Whitmore & Binyon (Millwrights) drawing of April 1874 appears to show the present windmill and is inscribed ‘Wind Tackle Friston’. It is likely that in approximately 1872 major modernisation by Joshua Reynolds resulted in the construction of the present roundhouse, raising the buck and the introduction of new larger patent sails and fantail winding. Formerly the buck had been rotated by a tailpole to catch the wind.

Joshua died in 1883 and the property passed to his nephew Caleb R Wright, who had joined his uncle at the mill c.1867. His son, also Caleb but with the surname Reynolds, was born in 1884. In the later C19 a pair of stones and an oat crusher were set up in the old mill house, driven by a Garrett portable steam engine until 1908, then a 14 h.p. Blackstone oil engine. In 1923 the stones were moved into the roundhouse. There was originally a central octagonal opening on the first floor; in 1923 this was infilled and replaced by four sets of traps north, south, east and west. Bins were set up in two of the quarters between the crosstrees and the area was given traps (this may refer to the partial second floor). The engine was set up outside the roundhouse, and replaced in 1956 by a 32 h.p. Ruston diesel.

Caleb Wright died in 1924 and Caleb Reynolds moved into the mill house with his wife Mabel and only son Robert (Bob), born in 1915, who entered the business in c.1930. In 1936 a half ton mixer driven by an electric motor was installed and the remaining two quarters between the crosstrees infilled.

The mill worked on four sails until 1943, and then on two until 1956. Bob Reynolds sold the goodwill to Pauls & White of Ipswich in 1964; engine powered milling continued until 1966. The wind drive was probably dismantled in the 1960’s, and the drive to the head stones was dismantled in 1962 and the millstones removed and sold.The engine driven machinery and engine had gone by the early 1970’s when their corrugated iron clad housing was removed. Caleb Reynolds died in 1971; his son inherited and sold the mill and its ancillary buildings to the current owner in 1972.

The interior framing and machinery show that there has been alteration over the years. The framing at the tail shows modifications necessary to install the new steps, taller and narrower than the originals. Another 1870’s Whitmore & Binyon drawing shows the present cast iron windshaft (the largest in Suffolk) which must have accompanied the introduction of new patent shuttered sails and fantail. The millstone layout inside the buck may have been changed at this time to the present arrangement. The crowntree, the major horizontal timber around which the buck is framed, has also been replaced since the mill was built. The trimmer between the sheertrees has a mortice for a former tailpole, evidence that the 1812 mill was much lower and almost certainly had cloth-spread sails.

In 1976-7 major structural repairs were carried out to the mill, which has suffered from Deathwatch beetle infestation, new weatherboarding was fitted and a new roundhouse roof constructed. The mill was upgraded to Grade II* in August 1983 and is was described thus:

In order to prevent collapse of the structure, English Heritage erected an external steel frame around the roundhouse in 2005. Additional maintenance work has been carried out since 2009 in order to stabilise the structure. The mill is on the Heritage At Risk register.

ANCILLARY STRUCTURES
The earliest mill house, first mentioned in a transaction of 1853, stood on the site of the corn store adjacent to Mill Road. In 1872 Joshua built the present mill house which bears the date and his initials. It is similar to others built by Whitmore & Binyon, which suggests it too was part of the improvement scheme carried out by these millwrights. The interior of the mill house has been remodelled at the rear and is in a poor condition.

The corn store, a single storey brick building on the road frontage, replaced the earliest mill house (a weatherboarded, vernacular building) and is shown on the 1882 OS map; it was extended to the north-east and partly reconstructed in c.1957. The mill cottages to the south-east of the mill are on the OS map of 1882.

The two surviving sheds, unlike the frontage building, are not shown on the 1882 OS map but had been erected by 1904 and are clearly depicted on the 1927 OS. They are in a poor state of repair.

Friston Mill, Mill Road, Friston, built in 1812 and modified in the early 1870s, is listed at Grade II* for the following principal reasons:
* Architectural interest: the mill retains a significant proportion of its fabric of 1812. The buck has a finely crafted and detailed timber frame;
* Historic Interest: the mill’s form articulates its evolution from an early C19 post mill to a more sophisticated late C19 example, judged to be one of the finest remaining post mills in the world;
* Intactness: the milling process remains legible and although the stones are no longer in situ, much of the mechanism, including the windshaft, tail wheel, 2 great spur wheels and wooden brake-wheel survives.