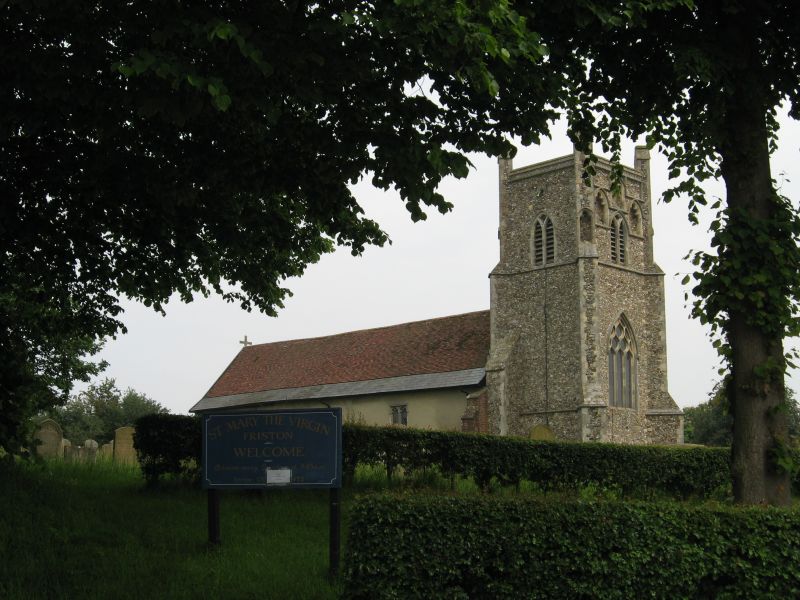 the description shall be amended to read:-

Parish Church. Remains of C11 structure in north wall; some C12 work; Main body of the
church C14 and C15; post-Reformation additions of several dates, detailed below; restorations
and redecorations of the late C19 and early C20 concentrated at the west and east ends
respectively. Flint with cement rendering; brick porch and buttresses; roof of tile with lower
verge of slate. Chancel of three irregularly spaced bays; nave of seven bays; west tower of three
stages with broad, setback angle buttresses; west organ loft of wood. The chancel is not set off
from the nave by an arch, being demarcated by a single step to choir area; this level change as
well as the painted decorations in the chancel date to 1913 and are, according to a brass fixed
to the single lancet in the south side of the chancel, a memorial to Emily Sophia Hills; the
timber framing to the roof appear to date from this refurbishment. Chancel with three-light
window, curvilinear tracery is late C19 work and is filled with memorial glass dated 1895.
Arched timber principals to nave, the area above the collar plastered, like the underside of the
roof wall plate moulded. The mouldings on the roof suggest a late C15 date; there is also some
suggestion that the timbers may have been reused from another structure, perhaps in the late
medieval period. Pair of two-light C15-styled windows to north wall of nave; lancet with Y
tracery on line between chancel and nave to south; two-light Perpendicular window to side of
entrance porch and a two-light Decorated window to the other side. Entrance to south of the
nave dates to the C12. Segmental pointed arch to tower. Interior fixtures and fittings include:
benches to nave of mid to late C19; choir stalls of same date partly removed; octagonal font at
west end, centre of aisle; sacrarium enclosed by a wood and metal rail and elevated; painted
wood reredos dating to early C20. Fine wood coat of arms of James I to the north nave wall;
early C17 pulpit mounted on a C19 or C20 base, may perhaps be a married piece; holy table
by main door; in 1988 new window installed by Mrs. Vernon Wentworth of the Blackheath
Mansion Friston.

Excavations in 1983 and 1988 have revealed two new features of note: in the north nave wall
a round-arched door evidently of C11 date; to the east of the south door a staircase dating
probably to the C14. No evidence for the latter visible from outside or from within; the former
left exposed but blocked. Exterior features of note: south porch of brick with wood verge
boards and pointed diaphragm arch of C18. West tower rebuilt in facsimile in 1900-1, its three-
light west window with reticulated tracery; grouping of trefoiled arches and bell louvre to top
stage, an unusual feature; two-light bell louvres to each of remaining top stages of tower. The
nave is noteworthy for having been very little restored in the nineteenth century.