A Grade II* Listed Building in Hinton on the Green, Evesham, Worcestershire 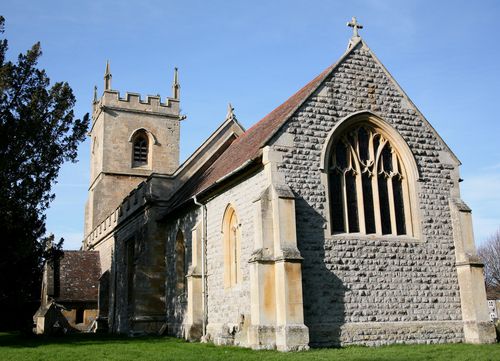 Civil Parish: Hinton on the Green

SP 04 SW HINTON-ON-THE-GREEN CP -
1/167 Church of St Peter
30.7.59
GV II*.
Church. Circa 1500 with C14 and late C11 remains, restored 1860s. Chancel
added 1895, by J D Sedding. Limestone rubble with ashlar tower and tile roof.
Comprises a west tower, nave, south porch, and lower chancel. The tower is
of three stages separated by string courses and has diagonal buttresses and
an embattled parapet with corner pinnacles and gargoyles. The bell openings
are deeply splayed, with hoods, and two trefoiled ogee lights under pointed
heads with quatrefoils. The west window is of three trefoiled ogee lights
with C19 Geometrical tracery. The nave has an embattled parapet. The window
tracery was renewed in the C19. On the north side is a window of four cinque-
foiled lights under a flat head with Perpendicular tracery. To its right is
one of two trefoiled ogee lights under a pointed head with quatrefoil. At
the right is a blocked doorway with roll-moulded round arch, angle shafts with
scalloped capitals, an inner square order, and a tympanum carved with false
voussoirs and intersecting incised decoration. To the west of the porch on
the south side is a window of two trefoiled lights with a trefoil under a
pointed head. To the right is one of four cinquefoiled lights under a flat
head with Perpendicular tracery. The C19 gabled porch has an outer moulded
pointed doorway with angle shafts. The inner doorway has a roll-moulded
round arch, angle shafts with scalloped capitals, and an inner square order.
The chancel is of two bays and has windows of two trefoiled ogee lights under
pointed heads. The east window is of five trefoiled ogee lights under a
pointed traceried head. A foundation stone is dated "1894". Interior:
tower arch is pointed and moulded. Nave roof has four C19 pine trusses
with turned king-posts and arch-braced collars. C19 chancel arch is moulded
and pointed. To the south is a rood stair. In the north wall of the nave is
a C13 piscina. The octagonal font is C15 and has quatrefoil panels.