Gitcombe Including Front Garden Wall to East and Gate Piers 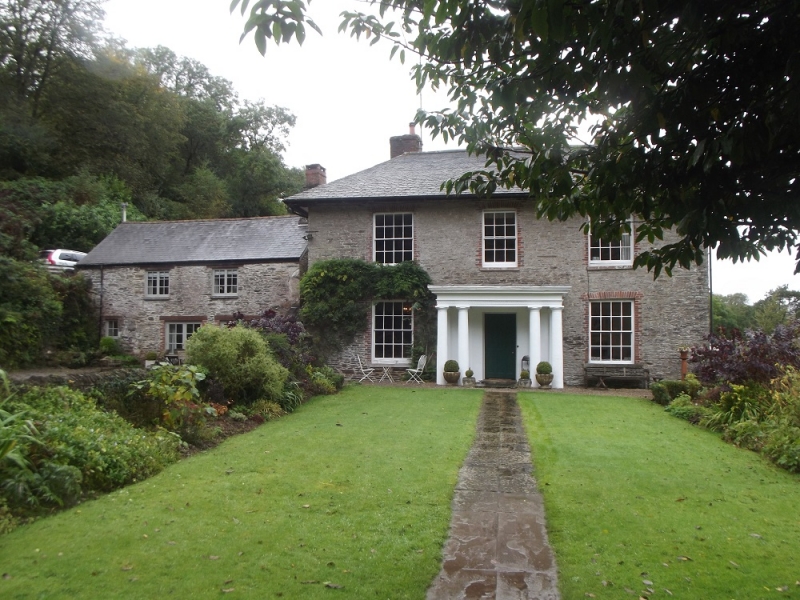 House, formerly a farmhouse. Circa 1830-40. Local stone rubble with red
brick window dressings; probably originally stuccoed. Grouted scantle slate
hipped roof with paired brackets to the deep eaves. At the time of the survey
(1987) the slates were about to be replaced with similar scantle slates.
Axial red brick stacks.
Plan: Double depth almost square plan. The 2 principal rooms are at the
front; a deeper dining room to the left with a large kitchen behind at the
back, and a shallower drawing room to the right at the front with a small
study behind and a butler's pantry behind that at the back. The entrance hall
at the centre is the full depth of the house with a stair well at the back
between the kitchen and pantries.
On the left side of the house there is a circa C18 cottage linked to the main
house by a covered passageway.
Exterior: 2 storeys. Symmetrical 3-bay east front with original 16-pane
sashes, centre first floor a 12-pane sash. Central doorway with original
panelled door and reveals and a large portico with 2 pairs of stuccoed Doric
columns and pilasters supporting an entablature canopy.
The right hand north return is a longer, almost symmetrical 3-bay elevation
of original windows, those to the left are 16-pane sashes, those to the right
and centre are closer spaced 12-pane sashes except for the ground floor right
hand window which is a 2-light sash.
Rear elevation has original 12 and 20-pane sashes and the original very tall
narrow round-headed stair sash with glazing bars.
The circa C18 stone rubble cottage adjoining left has a Welsh slate roof, a
right hand gable-end stock, C20 windows at the front and a lean-to outshut at
the back. It is linked to the house by a covered passage and is now used as
a holiday cottage.
Interior: The interior is virtually unaltered, all internal joinery is intact
including panelled doors and internal window shutters. The front right hand
room has a fine moulded plaster ceiling cornice with acanthus brackets and an
imported reeded marble chimneypiece. The left hand room has a moulded plaster
cornice and a plain marblle chimneypiece. The hall has a modillion cornice.
The open well staircase at the back of the entrance hall has an open string,
moulded mahogany handrail wreathed over the curtail. The stairs lead to a
large landing which has a cornice with egg and dart moulding, anthemion and
vitruvian scrolls.
Including the front garden walls and gate piers. The front garden has a C19
low slate rubble wall with rough slate copping and a pier of gate-piers at the
front and another on the left side, square on plan with slate caps. The
ground on the outer right side is much lower and the wall here acts as a
retaining wall for the garden.