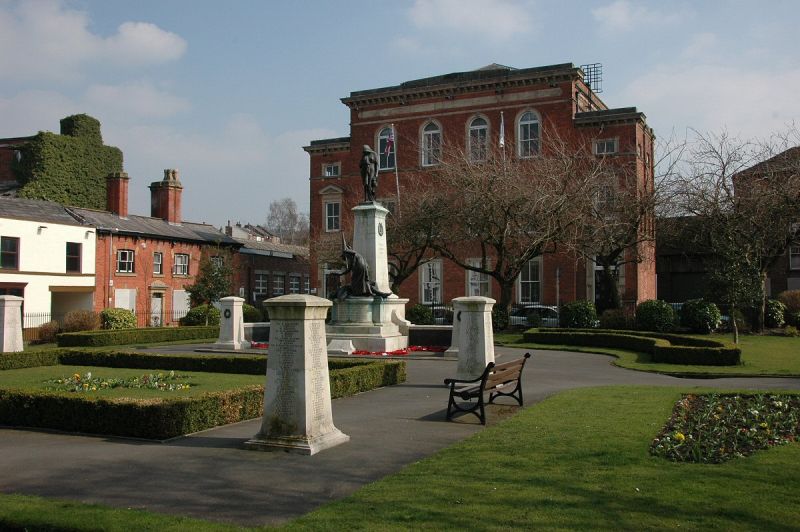 First World War memorial unveiled in 1921, designed by John Millard RSA and with later additions for the Second World War. White ashlar and bronze. Composition includes the principal pillar surmounted by a bronze female mourning figure, and with the figures of a soldier dead from gassing honoured by Britannia on the stepped base below. Curved flanking stone walls and four detached piers all carry inscriptions.

The memorial stands in Park Green, in front of the Grade II-listed Chapel Mill and with other Grade II-listed buildings surrounding the park. The monument takes the form of a c7m tapering ashlar pillar rising from a broad three-stage base, with to the front of the base an engaged column carrying the principal dedicatory inscription and supporting two of the bronze sculptures. The base is flanked by low, curved walls ending in tapering capped piers, creating a semi-circular forecourt.

The front of the pillar is ornamented with a Latin cross carved in low relief, whilst the remaining three sides, and the fronts of the matching wall piers, bear bronze wreaths. Four similar, freestanding, piers bearing the commemorated First World War names are placed separately to the front in a square pattern.

The bronze statue group consists of a hooded female mourner atop the cornice of the pillar, with bowed head and draped gown partly gathered up in her right hand, holding a wreath by her side in her left hand. On the base below a gassed young soldier lies on his back beneath Britannia who offers a laurel wreath over his head with her right hand, and holds a furled flag in her left.

The principal dedicatory inscription reads: THIS MEMORIAL WAS ERECTED IN/ HONOUR OF MACCLESFIELD MEN WHO/ GAVE THEIR LIVES FOR THEIR KING/ & EMPIRE IN THE GREAT WAR 1914-1918/ UNVEILED BY THE MAYOR OF MACCLESFIELD/ ALDERMAN J. G. FROST J.P. SEPTEMBER 21ST 1921. Below the bronze wreath to the right side of the pillar is inscribed FRANCE/ BELGIUM/ EGYPT with, in a similar position to the rear, PALESTINE/ MESOPOTAMIA/ RUSSIA and to the left side, ITALY/ MACEDONIA/ DARDANELLES.

Whilst the First World War names are recorded alphabetically on the four freestanding piers, c200 Second World War casualty names were added later by the addition of bronze plaques to the front faces of the low flanking walls of the memorial. This includes the dedication IN MEMORY OF THOSE/ WHO GAVE THEIR LIVES/ IN THE WAR 1939-1945.

This List entry has been amended to add the source for War Memorials Online. This source was not used in the compilation of this List entry but is added here as a guide for further reading, 26 January 2017.

The aftermath of the First World War saw the biggest single wave of public commemoration ever with tens of thousands of memorials erected across the country. This was the result of both the huge impact on communities of the loss of three quarters of a million British lives, and also the official policy of not repatriating the dead: therefore the memorials provided the main focus of the grief felt at this great loss. One such memorial was raised at Macclesfield as a permanent testament to the sacrifices made by the members of the local community who lost their lives in the First World War.

In December 1918 at a meeting of Macclesfield Town Council the Mayor, J G Frost, called for the setting up of a public meeting to discuss the possibility of a war memorial. He suggested that religious groups should refrain from producing war memorials for their own congregations, in order that the town war memorial should become an all-inclusive focus of commemoration.

A War Memorial Committee was formed in February 1919 and began fund-raising, with the aspiration to reach £10,000. By May just over £2,000 had been raised. The Committee decided to distribute two-thirds of funds to widows and orphans of the fallen, and spend the remainder on a monument to go either in the Market Place or Park Green. By June 1919 only £3,500 had been raised towards the target and subscriptions were re-opened. By November the Committee had contacted the sculptors David McGill and John Millard for designs for the proposed monument.

Millard sent a model that received great support from Thomas Cartwright, Headmaster of the Macclesfield School of Art and member of the War Memorial Committee. Cartwright had studied alongside Millard in Paris and was keen that the Committee take into account that Millard was local. The design was recommended for acceptance, notwithstanding a likely cost of over £4,000.

The Vicar of Macclesfield wanted to see some use of Christian iconography, and where there was originally intended to be an inscription on the shaft of GLORIA VICTIS, there is now a cross in relief. The local groups of the Comrades of the Great War and the National Association of Discharged Soldiers and Sailors objected to Millard's harrowing depiction of a dead soldier: it looked to them as though the death was caused by the soldier’s own mistake. Millard was invited to a Committee meeting amidst the debate and in December 1919 produced an alternative model. The original model was eventually accepted, however, following a defence of its realism, emotive quality, and the legacy it would leave to future generations who saw it.

Early in 1921 there was also debate about the recording of casualty names. A case in point was that of William Knight, Royal Engineers, who had hanged himself at the age of 43 having served for four years during the war. His wife and brother wanted his name included but the Committee, though sympathetic, decided to omit the names of those not killed in action. In the end, 668 names were included, in order of rank.

The intended site was changed from Market Place to Park Green, both in light of Millard’s own preference and due to traffic concerns around the busier Market Place. Although fundraising in the latter stages proved slow and difficult the commission was eventually made. The memorial was built by a local company, E and H Frith of Catherine Street. It was unveiled on 21 September 1921 by the Mayor of Macclesfield and dedicated by the Bishop of Chester before a crowd of some 20,000 onlookers.

Following the Second World War, two curving bronze relief panels were attached to the monument’s flanking walls to carry the names of those who died in the Second World War. Park Green has had slight changes of planting scheme though the shape of the lawns and the locations of paths remain the same.

John Millard (1862-1948) RSA was born in Wigan and attended art schools at Warrington and Manchester, where he won a county scholarship to study under Jean-Antonin Injalbert (1845-1933) and Alexandre Falguiere (1831-1900) in Paris. He taught at the Dover School of Art, and exhibited in Liverpool, the Royal Academy, and in Paris. He was Principal Master of the Modelling School at the Manchester School of Art from 1905, and by 1919 was a Professor of Sculpture, then by 1934 Head of Modelling and Sculpture. He also taught at the Manchester Grammar School, and in anatomy and dissection at the Medical School of Manchester University.

Macclesfield War Memorial, situated at Park Green, Macclesfield, is listed at Grade II* for the following principal reasons:
* Historic interest: as an eloquent witness to the tragic impact of world events on this community, and the sacrifices it made in the conflicts of the C20;
* Architectural interest: designed by John Millard, the simple but elegant pillar, pedestal and flanking walls with piers provides a suitable mounting for his bronze sculpture, with additional freestanding matching piers bearing names that add interest to the complex and to Park Green;
* Sculptural interest: a rare depiction, possibly unique in the UK, by the respected Manchester sculptor John Millard of the figure of a gassed soldier, emblematic of one of the new weapons of modern war. The bronze group is of exceptional design, high quality, and intense realism;
* Group value: with the Grade II-listed Chapel Mill and with other Grade II-listed buildings surrounding the park.