A Grade I Listed Building in Vowchurch, County of Herefordshire 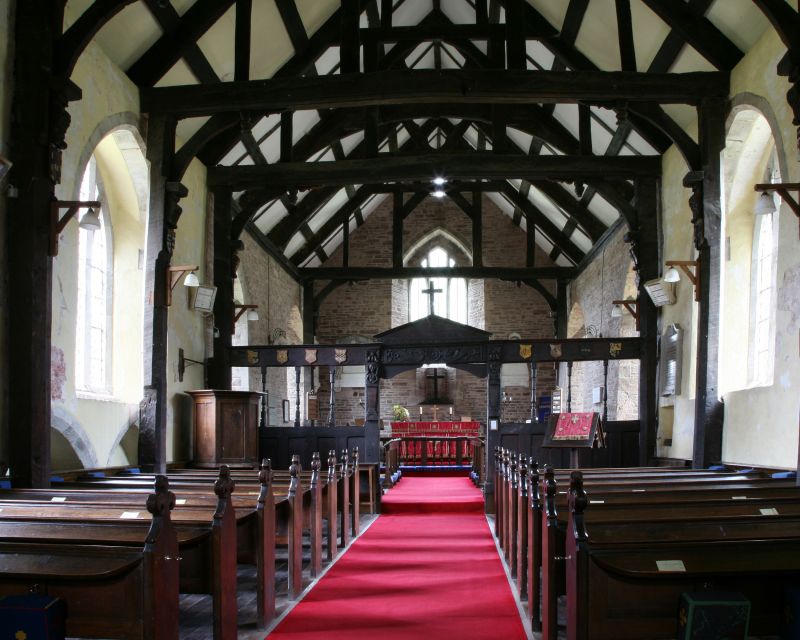 The bell turret, possibly dating from early C16,
is timber-framed with close-studding with two rails topped by a slate-clad
broach spire. Two-light late C19 cinquefoiled west window. North-west
window of nave is of similar design but probably C14. The next window to
the west is C13 with three stepped lights. Two c1300 trefoiled windows on
north side of chancel have two lights - the western one is restored. East
window similar to the 3-light window in the north wall of the nave. Two
2-light trefoiled windows in south wall of chancel matching those on north
side. South-east window of nave matches the 3-light window opposite. East
of the south porch is one small C12 round-headed window. South porch has
C18 wicket gate and gabled stone slate roof with each side supported by 12
C17 balusters. Entrance under 2-centred moulded C14 arch, contemporary ledged
door with ornate strap hinges and three vertical fillets

INTERIOR: mainly C17
roof is supported on 7 pairs of chamfered posts extending to wall-plate level.
Consoles on each post carry struts supporting tie beams with pendants; above
the ties are collars supported by queen struts and angle struts. Between the
last and penultimate pair of posts, corresponding to the liturgical chancel,
are two C14 (?) trusses without posts consisting of foiled principal rafters
and V-struts above arch-braced collars rising from the wall plates. The
chancel is also defined by a C17 screen enriched with two terms beneath a central
pediment and a plank and muntin derived dado supporting balusters. In the
chancel are two inward-facing benches incised "RK 1636", C17 altar rails with
turned balusters, a C13 piscina with 2-centred head and two basins and a shelf,
also a late C19 heating stove inscribed "FLAT TOP/ ROMEESSE". Nave: pulpit
is probably C18, 5-sided with plain moulded rail and bulbous pedestal with
3 feet. West of the pulpit in the north wall are two plain arched tomb
recesses. On the south side west of the screen is a large niche, possibly
the remains of access door to rood loft Oak panelling, probably C17, runs
along both sides of the nave. The font has a fluted circular basin, probably
C12, supported on a C19 base. At the west end of the nave two parclose screens
with balusters, possibly C17, divide off the north-west and south-west corners
and in the centre is a C17 heavy open timber-framed belfry support with a
large central pendant and angle struts to the bottom storey. Monuments:
on the south side of the east wall a tapering marble wall plaque in the
style of Canova containing a head, to Sir Edward Boughton, died 1794, of
Poston Court (qv); on the west side of the south door, a simple stone
plque supported on a bracket, to Matthew Seaborne, died 1798. Graded I on
account of unusual interior with posts supporting roof trusses.