A Grade II* Listed Building in Redcliffe, Kensington and Chelsea 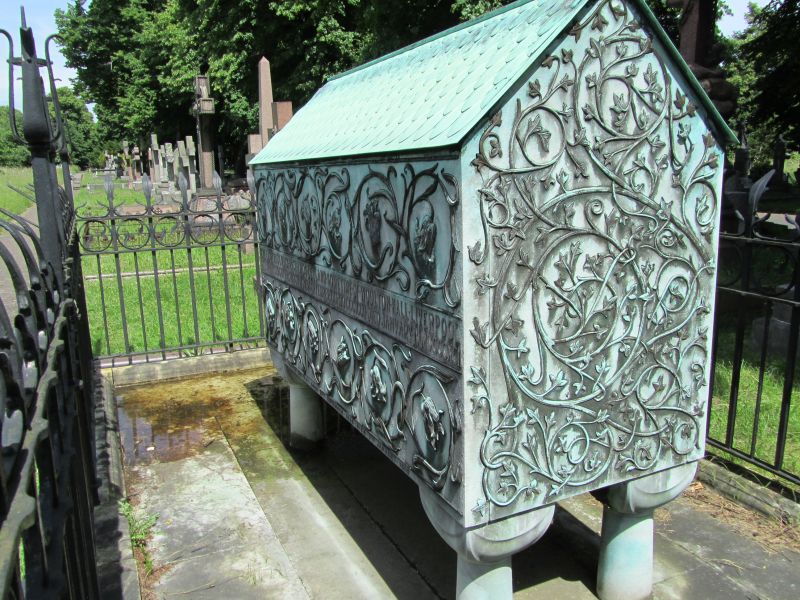 The tomb is set on a stone plinth and bound by fine wrought iron railings with lilyhead finials to the corners.

Frederick Richards Leyland was a ship owner and art patron, born the son of a bookkeeper in Liverpool in 1831. He made his fortune running the Bibby Line of steamships, where he started working as an apprentice in 1844. In 1872 Leyland bought out his employers, renaming the company the Leyland Line, and later began transatlantic services. Leyland was a great patron of the arts, leasing and restoring Speke Hall in Liverpool, an important half-timbered Tudor house, from 1867 and, from 1877, a Robert Adam-designed house Woolton Hall. From 1876 he remodelled his London home, at 49 Prince's Gate, to further his dream of 'living the life of an old Venetian merchant in modern London'. Leyland collected Italian Renaissance paintings and also became the leading patron of the Pre-Raphaelite group of artists, including Dante Gabriel Rosetti, Edward Burne-Jones and James McNeill Whistler; the latter decorated the entrance hall and dining room of 49 Prince's Gate. This is the only tomb designed by Edward Burne-Jones, who was principally a painter and designer of stained glass.

* Architectural interest: a unique and beautiful tomb designed by one of the foremost artists of the Victorian era, Edward Burne-Jones, and his only work of funerary art
* Historic interest: commemorating a prominent patron of the arts, Frederick Richards Leyland, who commissioned work from Dante Gabriel Rosetti and James McNeill Whistler
* Group value: with other listed tombs nearby, in the Grade I-registered Brompton Cemetery.