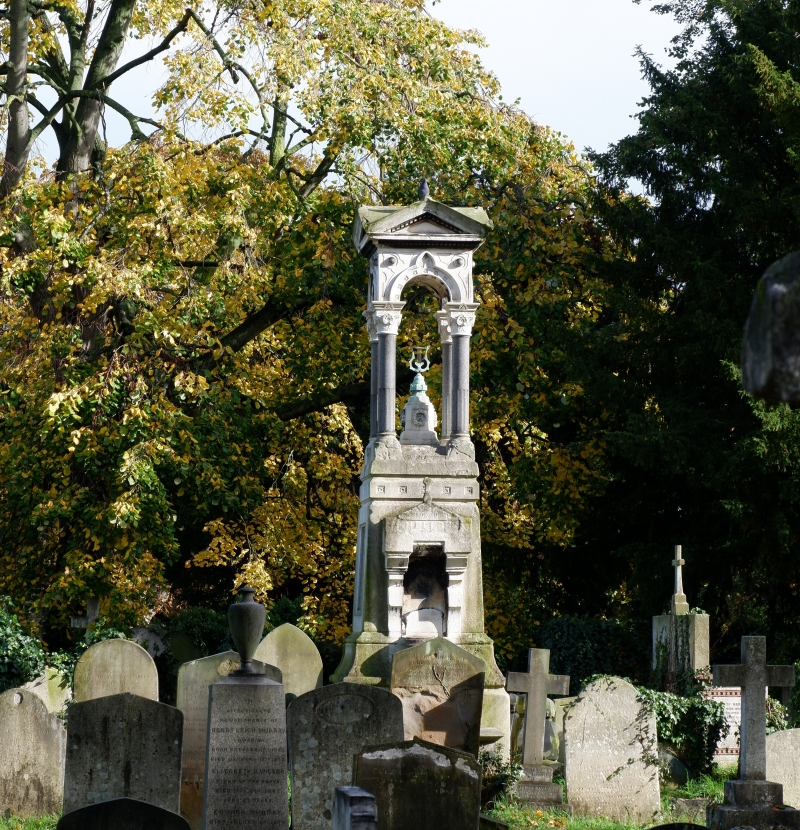 A very tall monument in a hybrid style combining Classical and Romanesque features. Square base with semicircular projection to front beneath a heavy corbelled canopy, forming a niche which once contained a bust of Mellon. Battered pedestal with inset granite inscription panels. Left-hand panel reads: 'This monument was erected by public subscription to the memory of Alfred Mellon in admiration of his great musical talents and esteem for his many virtues'; right-hand panel bears a quotation adapted from Shakespeare's Henry VIII: 'The force of his own merit made his way a gift that heaven gave to him.' Superstructure comprises four granite columns with leaf capitals supporting an arched canopy and a pedimented top. Beneath the canopy is a stone pedestal with carved wreaths supporting a bronze lyre.

Alfred Mellon (1820-67) was a musician, composer and conductor. He began his career as a violinist, becoming leader of the orchestra at Covent Garden; he later served as musical director at various London theatres, and was conductor of the London Promenade Concerts and the Liverpool Philharmonic Society. His works include the popular opera Victorine (1859). Mellon's funeral in Brompton Cemetery was attended by thousands of mourners, and a memorial fund was set up to erect a permanent memorial. Mellon's wife Sarah Jane, née Woolgar (1824-1909), buried along with him, was one of the leading actresses of the day.

The West of London and Westminster Cemetery, known as Brompton Cemetery, was one of the 'magnificent seven' privately-run burial grounds established on the outskirts of London in the 1830s and 1840s to relieve pressure on overcrowded urban churchyards. It was laid out in 1839-1844 to designs by the architect Benjamin B Baud, a former assistant and long-time collaborator of Sir Jeffry Wyattville. The flat, rectangular site, which had previously been market gardens and brickfields, possessed few topographical advantages. Baud thus devised a classical landscape of axial drives and vistas, culminating at its southern end in a dramatic architectural ensemble recalling Bernini's piazza in front of St Peter's in Rome. The main northern entrance takes the form of a Doric triumphal arch and leads to the Ceremonial Way, a wide drive lined with lime trees. This bisects a grid of smaller carriageways and paths, with rondpoints at the major intersections marked by mausolea or ornamental planting, the latter devised by Isaac Finnemore with advice from J C Loudon. The southernmost stretch of the Ceremonial Way passes between the two raised stone-faced Colonnades, beneath which are catacombs. The Colonnades eventually curve outwards in opposed quadrants to form a Great Circle. The ensemble is closed at its southern end by the domed octagonal Anglican chapel; Catholic and Nonconformist chapels intended for the outermost points of the Great Circle were omitted for financial reasons. The cemetery was never a commercial success, and was compulsorily purchased by the General Board of Health in the early 1850s.

* Design interest: a prominent and imposing monument in an unusual hybrid style;
* Historical: commemorates Alfred Mellon, a leading figure in mid-C19 London musical life;
* Group value: it is located within the Grade I-registered Brompton Cemetery and has group value with other listed tombs and structures nearby.