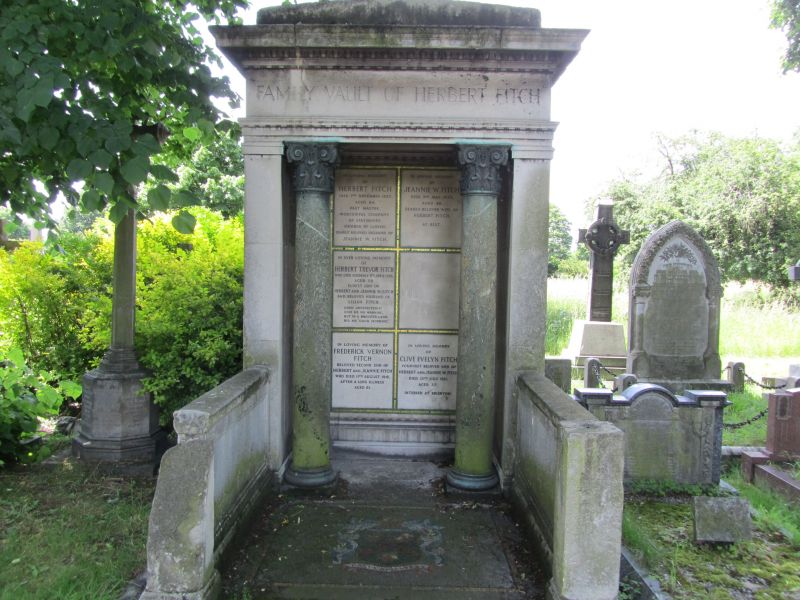 The monument takes the form of a classical aedicule in Portland stone, located alongside the Ceremonial Way. Two square pilasters and two verde marble columns in antis, these with bronze Corinthian capitals and bases, support an entablature with egg-and-dart and bead-and-reel carving and a frieze inscribed 'Family Vault of Herbert Fitch'. Inside the aedicule are six stone tablets, edged in green and gold tesserae, commemorating Herbert Fitch (d 1933), his wife Jeannie (d 1935) and sons Herbert Trevor (d 1935), Frederick Vernon (d 1941) and Clive Evelyn (d 1921); the sixth tablet is blank.

The small 'forecourt' in front of the aedicule is flanked by solid walls and paved with a mosaic showing the family coat of arms (three leopards) and the motto 'Facta non verba', meaning 'Deeds not words'.

Herbert Fitch was the founder of the printing company Herbert Fitch and Company, based on Bury Street in the City of London. His tomb records that he was also a Master of the Worshipful Company of Stationers and a member of Lloyds (that is, a subscribing member of the Society of Lloyds, a syndicate of insurers).

Brompton Cemetery was one of the 'magnificent seven' privately-run burial grounds established in the 1830s and 1840s to relieve pressure on London's overcrowded churchyards. It was laid out in 1839-1844 to designs by the architect Benjamin B Baud, who devised a classical landscape of axial drives and vistas with rond-points at the intersections marked by mausolea or ornamental planting, the latter devised by Isaac Finnemore with advice from JC Loudon. The main Ceremonial Way culminates in a dramatic architectural ensemble recalling Bernini's piazza in front of St Peter's in Rome, with flanking colonnades curving outwards to form a Great Circle, closed at its southern end in a domed Anglican chapel (the planned Catholic and Nonconformist chapels were omitted for financial reasons) The cemetery, never a commercial success, was compulsorily purchased by the General Board of Health in the early 1850s, and has remained in state ownership ever since.

* Architectural interest: an unusually decorative tomb, of Herbert Fitch and family, taking the form of a classical aedicule, and enriched with various materials including bronze capitals, green marble columns and coloured mosaic
* Group value: located on the Ceremonial Way, which is the principal thoroughfare in the Grade I-registered Brompton Cemetery, and having group value with other listed tombs nearby.