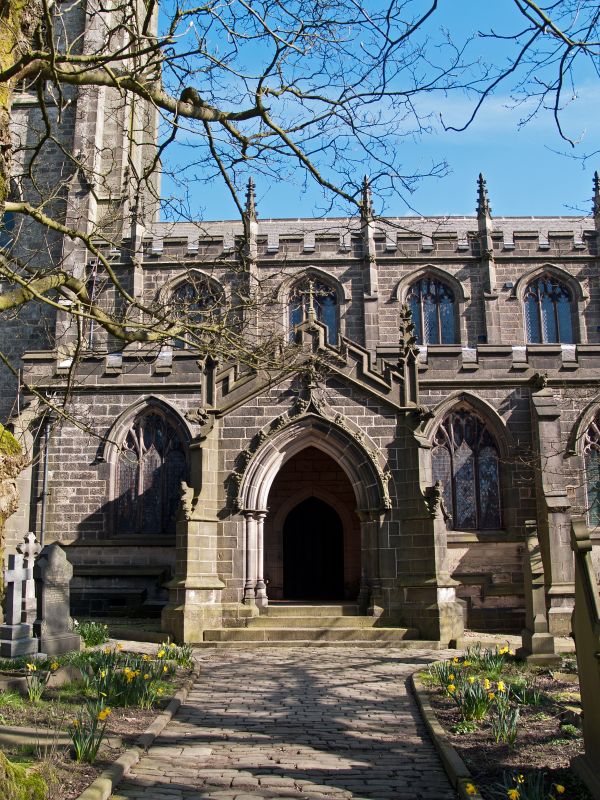 Church, c.1850-1854 by Mallinson and Healey. Set in the same church yard as the
Church of St. Thomas a Becket which it replaced. Ashlar, slate roof. Tall west
tower, nave, aisles, chancel and chancel chapels, north porch and south porch.
Gothic Revival with Perpendicular traceried windows. 3-stage embattled tower.
Angle buttresses. North door has pointed arched doorway with richly moulded
surround and carved spandrels. West window set in 1st stage, square window with
4 quatrefoil lights in 2nd stage. Tall belfry windows of 3 over 3 lights to 3rd
stage with elaborate hoodmould. Richly embattled parapet with tall pinnacles.
6-bay nave with 3-light windows to aisles and clerestorey, articulated by offset
buttresses surmounted by gargoyles. Buttresses to clerestorey rise to form
crocketed pinnacles. Richly embattled roofs with pinnacles and carved cross at
division with chancel which has lower roof. 3-bay chancel with 2-bay chancel
chapels. Diagonal buttresses rise to form pinnacles at east end with broad east
window of 5 over 5 lights with cusped heads and plate tracery. 2-light windows
in single bay return walls at basement level light small crypt chapel. Gabled
porches with decorated diagonal buttresses and pinnacles has pointed arched
doorway with richly moulded surround rising from colonnettes. Hoodmould has
carved faces to termination.
Interior: Arcades with pointed arches rising from piers with clustered
colonnettes and moulded capitals. Queen post roof with spandrels filled with
tracery. This rests on long posts with curved braces to tie beam, carved stone
angels. Lean-to roofs to aisles. Archbraced roof to chancel. Most windows
have stained glass. Reordered seating and furnishings in a modern cathedral
style c.1964 at the bequest of Abraham Gibson of Greenwood Lee (q.v.) by Robert
Maguire and Keith Murray. In the 3rd bay of the nave a large new organ screen
divides the church in two. Fine organ by Hill, Norman and Beard, 1964. The
unusual 11 sided font from the old church is set behind the screen in preference
to the 1850 font which is to one side of the altar. Some monuments from the old
church are now housed in the tower which has the earlier church's clock made by
Titus Bancroft of Sowerby Bridge in 1809. This has an 18' pendulum, dials 6' in
diameter. The chief merit of the church lies in its landscape value. It is
superbly sited and is visible on the skyline from every surrounding valley. N.
Pevsner, Yorkshire West Riding, (London 1479) p.262, 631. Illustrated in K.
Parry, Trans-Pennine Heritage (1981) p.136.