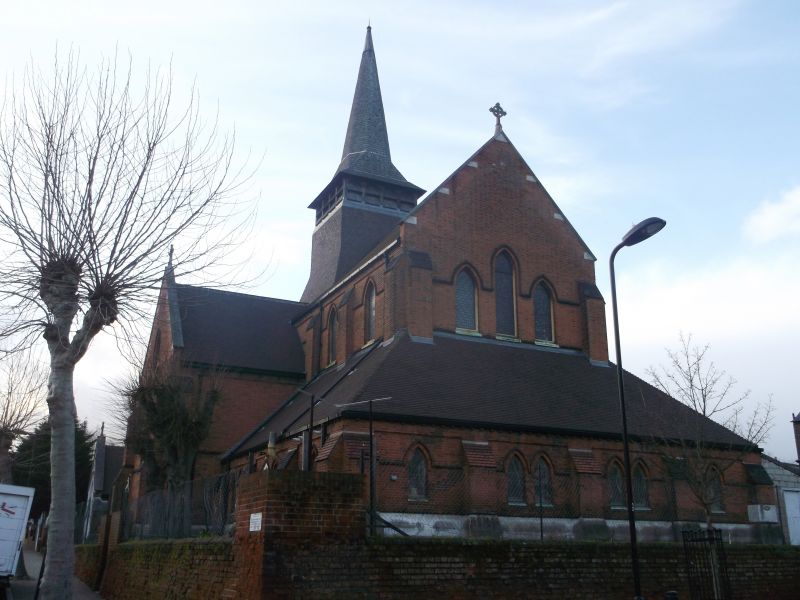 MATERIALS: Red brick laid in English bond with minimal stone dressings, tile-hung bell-turret with a timber top and a slate-hung spire above. Clay tiling to the other roofs (renewed 2009).

EXTERIOR: This is a red-brick church in a severe Early English style, hence most of the fenestration consists of lancets. The E window consists of three high-set graded lancets and the transept windows have a mandorla set above a pair of lancets. The clerestories on the nave and chancel also have lancet windows, one per bay. The aisles are covered by lean-to roofs. Over the crossing there is an attractive Arts-and-Crafts-style tile-hung, louvred timber belfry with a slate-hang chamfered spire above. In the angle between the N transept and chancel there is a round stair-turret capped with a short spirelet. The S porch has a deeply moulded head of three orders and engaged shafts to the jambs. At the W end there is a double entrance portal.

INTERIOR: The interior walls are plastered and all the surfaces are painted. There are four bays to the nave plus an additional bay to the transepts. The nave bays have double-chamfered arches under hoods, and circular piers with moulded capitals and bases. The arches to the transepts and chancel are similar but are considerably taller. The N aisle is cut off by a partition of glass and wood (in existence by 1966).

PRINCIPAL FIXTURES: The original fittings have mostly been replaced and the seating is now of modern chairs. At the E end of the chancel there is a large painting representing Christ in Majesty by Eva Allen Andrews and which dates from 1898-1900.There are S and W stained glass windows by Cakebread Robey and Co.

HISTORY: This is one of many red-brick churches built at the end of the C19 to meet the needs of Anglicans in the expanding suburbs of the capital. As here, the aim was usually to provide a sizeable amount of accommodation on a modest budget ¿ hence the use of the economical Early English style and the choice of brick as the building material. The architect Henry Cowell Boyes (1846 or 1847-1900) was based in the City. He was articled to Richard Tress and Francis Chambers in 1864 and remained with Chambers as an assistant after the partnership was dissolved in 1865 until 1870 when he commenced independent practice. He became architect to the Grocers¿ Company and built their livery hall in 1889-93. He is not a well-known church architect and no other ecclesiastical buildings by him are known. After it became redundant for Anglican worship in the latter part of the C20, the church became part of the Celestial Church of Christ. It was taken over by the Seventh Day Adventists c2006.

REASONS FOR DESIGNATION:
Former Church of St Paul, Chelmer Road, Homerton is designated at Grade II for the following principal reasons:
* It is a late C19 red-brick church in the early English style and which has an attractive Arts and Crafts bell-turret and spire over the crossing.