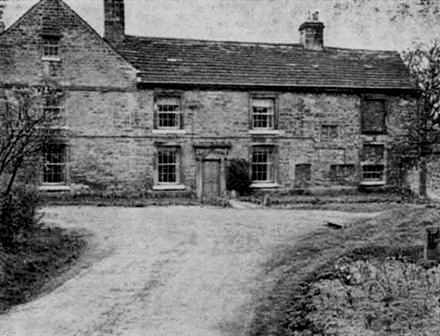 Farmhouse, now house. C17 or earlier, altered in earlier C18 (dated 1721 on
lintel of door), and wing added (possibly later). Sandstone rubble brought
to courses, and coursed sandstone rubble with quoins, stone slate roof. U-plan
formed by 2-unit main range on east-west axis, with receding wing added
at west end and rear outshut to east end. South front of 3 elements
comprising 2-unit 2-storey main range with 2½ storey gabled wing flush at the
left end; four 1st-floor windows in all; evidence of vertical joints between
the main elements; the almost-symmetrical centre has a fielded-panel door in
a wide architrave, with shaped moulding and inscription "TA 1721" on the
lintel, and a cornice; and two 16-pane sashed windows with plain surrounds on
each floor; to the right, a Tudor-arched former doorway altered as a window,
and to the right of this an irregular vertical joint. Beyond this joint, the
oldest part of the facade (of masonry brought to courses) has a small 3-light
chamfered-mullion window at ground floor, a similar 2-light window above but
offset slightly left; further to the right, 3 vertically-aligned openings
with plain surrounds: a square window at ground floor with another
immediately above(blocked) and a vertical rectangular window at 1st floor
(also blocked). The flush unsymmetrical gable of the wing to the left has a
16-pane sash on each main floor, a 9-pane attic window and a blocked window
immediately above this; in addition, remains of 2 blocked windows of
intermediate levels to the right, the roof carried down slightly on this side
(suggesting position of former staircase). Two ridge chimneys to main range;
side wall chimney to wing. Small single-storey C18 addition at north-east
corner. (Added screen wall attached at left end, and modern conservatory at
right-hand end, not included in the item). Rear has, inter alia, in the
centre a 3-light flush-mullion window at ground floor and 2-light chamfered-
mullion window at 1st floor, both with straight dripmoulds; unsymmetrical
gable of wing (incorporating staircase in left half) has tall narrow 3-stage
stair window with glazing bars, a 16-pane sash on each floor to the right, a
narrow attic window, and gable chimney with added flue to left.
Interior: hall or housebody in main range (now partitioned) has massive
chamfered lateral beams, and exposed joists; at west end, a very large
rectangular fireplace with stopped deep chamfer on the head and massive
cambered lintel; a doorway to the left of the stack, and a void at 1st floor
above, suggesting former staircase; in rear of wing, a fine open-well
staircase with closed string, square newels, turned balusters and moulded
handrail (former upper flight apparently removed); in chamber of wing, C18
fireplace with moulded architrave and cast-iron ducks-nest hob-grate with
raised Adam-style decoration on the cheeks including Classical figures
(probabaly late C18)j early C18 raised-cruck-truss roof, and formerly
external cap to main chimney stack showing that roof has been raised. Now
incorporated with ground floor at north-east corner, a former outside kitchen
house with bread oven.
Reference: Kate Taylor Wakefield District Heritage (Wakefield, 1976) Vol I
p.22.