A Grade I Listed Building in Kinver, Staffordshire 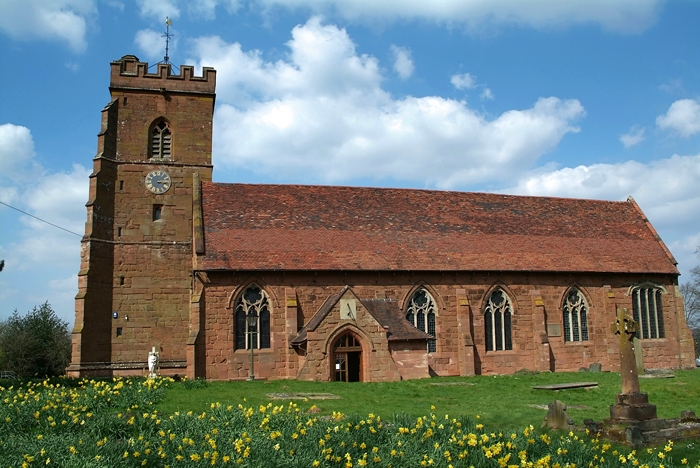 West
tower: mid-C14. Four stages marked by moulded strings, and crenellated
parapet. Pointed west door of two chamfered orders with returned hoodmould;
above is a pointed 3-light window with reticulated tracery and a hoodmould.
The north and south sides of the third stages each have a trefoil-headed
loop with sunken spandrels. 2-light pointed belfry openings with
reticulated tracery. Nave: at the junction with the south aisle to the
west is a C12 pilaster buttress. North aisle: 1975-6, by John Greaves
Smith of Kinver. The bay division buttresses are flanked by tall loops,
horizontal strip windows at eaves level, dormer with hipped roof to the
left. South aisle: early C14, extended to the east by a single bay in the
mid-C15 to form the Grey Chapel. Buttresses at the bay divisions. Pointed
C14 windows of three lights with Decorated tracery; the windows of the east bay
have Tudor arches and cinquefoil-headed lights. Door of circa 1856-7 on
the south side of the east bay, restored in the C20. Gabled south porch
of circa 1380 with a C20 eastern extension: 4-centred arch opening with an
inner chamfered order and an outer quarter-round moulded order.
Inside, a pointed door to the south aisle of two quarter-round moulded orders.
Chancel: pointed east window of five cinquefoil-headed lights and panel
tracery; in the angle between the Grey Chapel and the chancel is the entrance
to a staircase which led to a vestry beneath the sanctuary. This room is
lit to the east by three rectangular windows at ground level. North chancel
aisle: (The Foley Chapel). In existence by 1472 when its founder
John Hampton was buried here. Three windows to the north and one to the east,
all of similar character to those of the eastern bay of the south aisle.
In the centre of the north side is a mid-C19 door with Tudor arch, partly
blocking the central window.

INTERIOR: C14 south arcade, and north
arcade of 1856-7 by Thomas Smith of Stourbridge. Both have octagonal
columns with moulded capitals and pointed arches of two chamfered orders.
The easternmost column of the south arcade has the inscription "THO /
PIXELL / WILL / BANNISTER / 1671 / CHUR WARDENS". C14 pointed tower arch
of three chamfered orders springing from engaged octagonal columns with moulded
capitals. High pointed arch of two chamfered orders springing from engaged
octagonal columns. Immediately north of the chancel are the remains of a
newel staircase leading to a door with semicircular arch which probably
communicated with a former rood loft. Over the nave is an early C14
common-rafter roof with double collars; the lower collars are arch braced. Over
the south aisle a collar rafter roof with straight braces, C14 or C15.
C15 north chancel arcade with four-centred arches of two hollow-chamfered
orders springing from cylindrical columns with moulded caps and bases.
The south arcade has pointed arches of two chamfered orders springing from
octagonal columns with moulded capitals, C14 and C15, restored and
strengthened to the south by massive C19 brick arches. C15 arch-braced
collar rafter roof of 4-centred section over the chancel. C15 panelled
roof of 4-centred section over the north chancel aisle. C14 sedilia and
piscina at the east end of the C14 south aisle, all with ogee arches.
FITTINGS: late C14 stone font with elaborate tracery patterns. Hexagonal
oak pulpit with balustraded steps; dated 1623 but heavily restored in 1903.
Late-C17 oak communion rail with richly carved balusters. Panelled oak
reredos with fluted Ionic pilasters and panelled side walls to sanctuary.
Organ of 1901 in south aisle. MONUMENTS: The Grey Chapel: chest tomb
of Sir Edward Grey (d. 1528) with incised brasses of Sir Edward, his wife
and children. Large tablet to William Talbot (d. 1686) with segmental
pediment capped by an urn. Tablet to Dorothy and Edward Hillman (d. 1722
and 1727) with broken semi-circular pediment. The Foley Chapel: mutilated
C15 recumbant effigy of a knight reputed to be that of John Hampton (d. 1472),
the founder of the chapel. Architectural tablet to John Hodgetts (d. 1789).
two urns within an aedicule formed by two short thick unfluted Doric columns and
a heavy pediment. Chancel: tablet to Eliza Crawshaw (d. 1813), capped by
an obelisk with palm tree motif. Nave: tablet to John and Ann Comber
(d. 1732 and 1751). South aisle: large First World War memorial incorp-
orating a statue of St. George. Stained glass: east window of circa 1849
showing scenes from the life of Jesus, 2 early C20 windows in the south aisle.