A Grade I Listed Building in Siston, South Gloucestershire 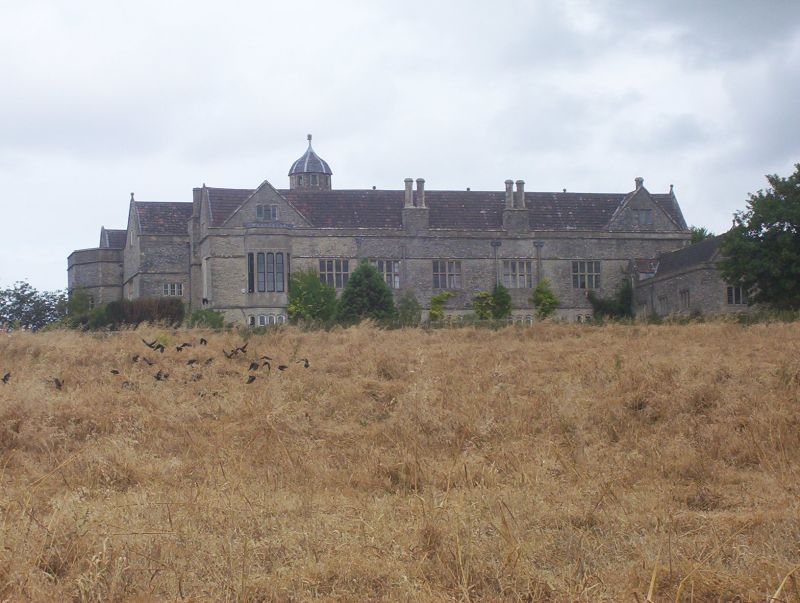 1.
5118 SISTON SISTON VILLAGE
Siston Court
ST 67 NE 2/62 11.5.53
I GV
2.
Late C16 house on this site is minutely described in an inventory of circa
1625. It probably forms the core of the present house with later C17 additions
and embellishments. Interior altered for sub-division into flats in mid C20.
A very large house in grounds at the edge of Siston Park. Rubble with pantile
roofs. Roughly E-shaped on plan, enclosing 3 sides of gravelled forecourt.
Two storeys and attics. Three gables to centre block, 3 to each wing, side
wings and side gables facing front. All gables have moulded copings and stone
ball finials. Windows fairly regularly placed, 2, 3 and 4-light casements
with flat heads, moulded stone mullions, some with transoms, others (taller)
with 2 transoms, all with relieving arches. Two octagonal turrets with cupolas,
one in each inner angle. Central single storey porch with later Tudor doorway,
heraldic shields in spandrels, restored 4-light casement above door with ogee
sub-arches. The inside elevation of each wing has 3 square head chamfered doorways,
and each, at the east end on first floor, has a coned niche with shell head,
bolection moulded surround and flat moulded cornice over. Centre door of south
wing has simple shield over. The end elevation of each wing has a 2-storey
6-light angular bay with crenellated, single transoms, carved heraldic shield
in recessed panels beneath each upper window. At right angles and abutting
each end elevation is a 2 storey wing with central gable and stone mullioned
casement windows. Moulded plinth returned and dropped at doorways. Weathered
string courses all round at floor levels, cornice, ashlar parapet with coping
between each gable. Tall square ashlar stacks with caps in pairs and quartets
set diagonally mostly at rear; some repaired in brick.
Interior: retains numerous features of interest despite conversion into separate
flats. Centre has cross beam ceiling, moulded and with pendants and rosettes
in panels, the main hall has been sub-divided and the great fireplace removed
to Addis Abata, doors have bolection surrounds, Original stairwell with ribbed
vaulted plaster ceiling with pendants. The staircase is very unusual but presumably
original: 2 twisted balusters per tread, each tread end cut and moulded. Newels
have open-cut pendants, similar ones at halfway marks with moulded panels:
twisted balusters across landing. The staircase is reached from hall through
a tall arch with sunk-chamfer moulding. An angled room overlooking the park,
added in mid C19, contains a re-sited Jacobean fireplace dated 1616 and oak
chimney piece (probably reproduction). South room of south-west wing has a
Gothick fireplace with sunk ogee lintel and clustered and banded columns.
The south wing contains the former library room on the ground floor and has
a bolection moulded fireplace with reverse brackets to mantel piece, panelled
ceiling with 2 oval wreaths in plaster and crested ornament in cornice and
cross-beam; the staircase, a good Jacobean one with turned balusters and straight
string has been imported (apparently from Cornwall).
(Literature: Country Life 7 October 1905, Inventory of circa 1625 in the Sackville
MSS, Kent County Archives).