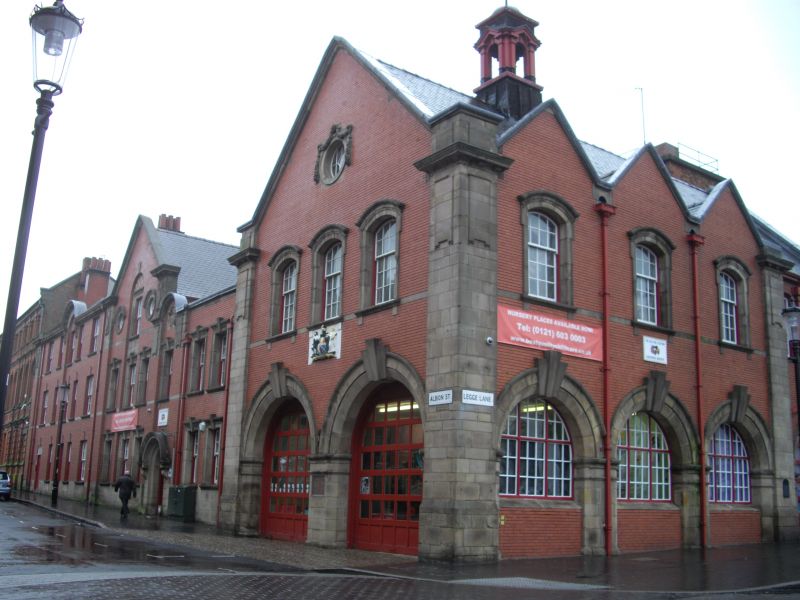 ALBION STREET
1.
5104
Hockley B1
Nos, 67, 68 and 69
SP 0587 SE 27/4
II GV
2.
Built as the Corporation Fire Station 1909-10. Architect T G Price (The Builder
1909, ol 96, p 19), not H E Stilgoe the City Surveyor referred to on the
foundation stone. A large asymmetrical extended L-plan block of buildings
on a corner site. Built on 2 and 3 storeys of thin, machined, hard red bricks
with rebated pointing and ashlar dressings. Baroque derivation, the design
combines Edwardian "Wrenaissance" elements with Birmingham Arts and Crafts
motifs. Steep pitched roofs with stone coped gable ends and stone eaves cornices;
the ridge of the fire station proper is surmounted by a small cupola;
slightly battered chimney stacks with sharply cut stone cornices. The dominant
theme in the fire station corner block is the use of large scale stone arcaded
ground floor openings with squat piers and boldly modelled arches with triple
keys. This arch motif is echoed by the heavy door hood in the 2 storey link
with the north-east wing, in the crest above in the parapet and again in the
semi-circular pediment above the revealed centre bay of the otherwise plain
end block of the wing. The fire station proper has first floor windows
in eased architraves with cambered cornices, the parapet being raised in small
gables above the first 3 bays but stopping short where the eaves of the roof
are carried out over the plain fourth bay. In the 2 storey link and the 3
storey gabled section of the wing (balancing the fire station) the windows
have architraves and cornices with keys. The revealed centre bay beneath
the gable is entirely stone dressed with chequerwork to it rounded head.
Yard entrance flanked by piers to south-east with single storey gate house
beyond, similarly detailed to the main block. A prominent corner site.