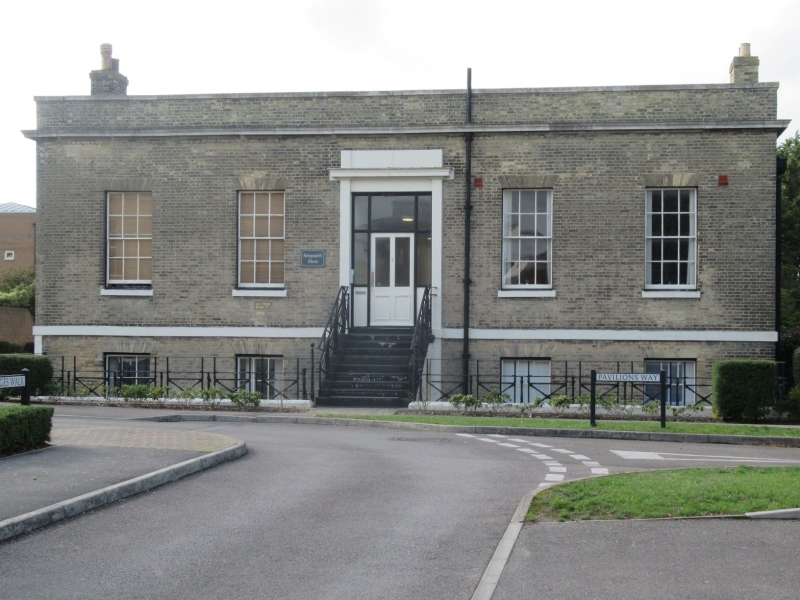 Canteen, later sergeant's mess, disused. 1856-59. Yellow stock brick with stone dressings, lateral stacks each side and a flat roof 2-room plan with central through passage. EXTERIOR: Single storey and basement; 5-window range. Symmetrical front with a ground-floor band; cornice and parapet; the doorway has a stone surround and cornice, with margin and overlights and a C20 door, with steps bridging the basement area; rubbed brick flat heads to 6/6-pane sashes to both levels. INTERIOR: Plain with rooms leading off central passage and dogleg stair. SUBSIDIARY FEATURES: Attached cast-iron railings with panels with diagonal bars and ball finials to basement area and front steps. HISTORY: Barrack canteens were franchised beer sellers until the Crimean War reforms, and generally taken back into army control thereafter. The barracks were a transit station for infantry built after the Crimean War. They were designed to be bomb proof, against mortar attack, because of their location just inside the Gosport Lines. This is the only example of this type of barracks in the country, forming a complete group with the Lines earthworks, and marking Gosport's importance in the defences around the Portsmouth dockyard. (Harfield A: The Gosport Barracks, sometimes known as "New Barracks": Gosport: 1988-: 16-21; Plans of the Barracks of England: South Western District: London: 1859-: 8).