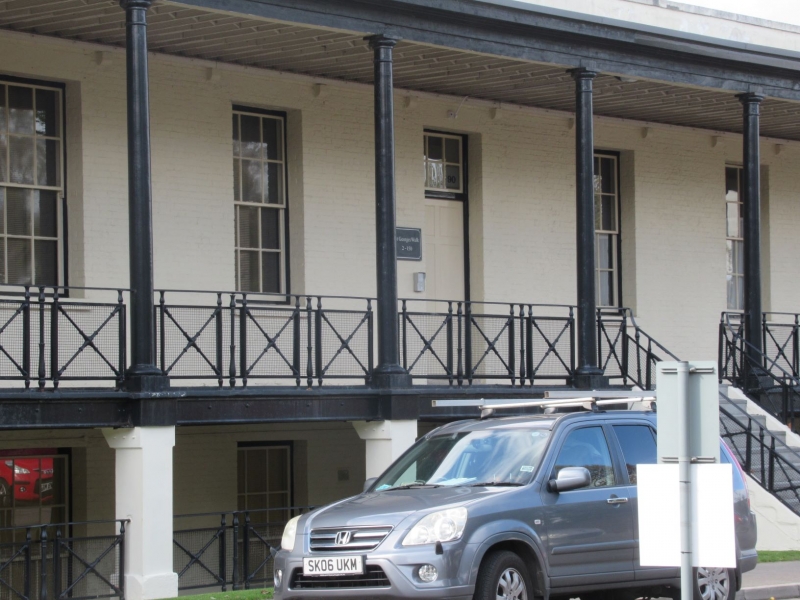 Soldier's barracks, now offices. 1856-59. Yellow stock brick with stone dressings and stucco front, lateral stacks each end and to centre of a flat roof. Single depth rooms to axial plan. EXTERIOR: Single storey and semi-basement; 70-bay range. A very long, regular front with a full-length verandah to both levels, of concrete piers beneath the ground floor landing and cast-iron columns above to a concrete flat roof, and dogleg stairs to both levels at 6-bay intervals. Rubbed brick flat arches to doorways with overlights and 6-panel doors separated by pairs of 6/6-pane sashes. The rear has sashes to both levels. INTERIOR: Plain, with later divisions; the former barrack rooms for approx 12 men retain original fittings including locations for rifle butts, and some fireplaces. SUBSIDIARY FEATURES: Attached cast-iron railings with panels with diagonal bars to both levels of the verandah, and to rear. HISTORY: This is the only example in the country of a highly developed design, combining cross-lit rooms with an external verandah, thereby answering some of the criticisms levelled at older barracks by contemporary barracks reformers. The verandah was used for wet weather exercising. The barracks were a transit station for infantry built after the Crimean War. They were designed to be bomb-proof, against mortar attack, because of their location just inside the Gosport Lines. This is the only example of this type of barracks in the country, forming a complete group with the Lines earthworks, and marking Gosport's importance in the defences around the Portsmouth dockyard. (Harfield A: The Gosport Barracks, sometimes known as "New Barracks": Gosport: 1988-: 16-21; Plans of the Barracks of England: South Western District: London: 1859-: 8).