A Grade I Listed Building in Marlow, Buckinghamshire 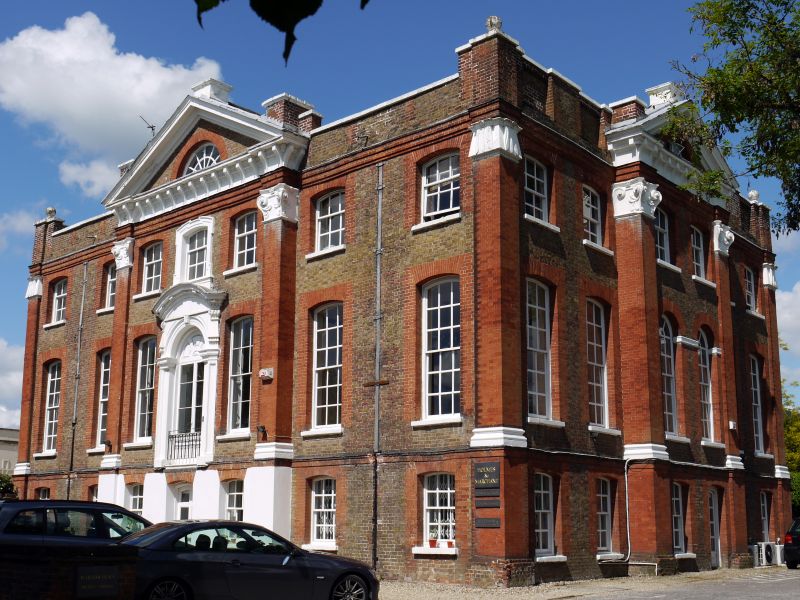 2.
1720. Thomas Archer. Said to have been built for the use of the Prince
of Wales, afterwards George II. (But in actuality for John Wallop, later
Earl of Portsmouth). Large square block, symmetrical on each side.
Imposing design of brown brick with red brick and stone dressings. 3
storeys and attic. Principal storey on lst floor. 5 bay front, 3 centre
with slight projection, angle pilasters with stone caps to centre part,
which has stone cornice, broken forward over pilasters, with deep frieze,
stone pediment with semi-circular radiating light in tympanum, parapet
with stone coping at sides and raised corner piers at feet of pediment
and angles of building. Hipped old tile roof and brick chimneys with
moulded stone capping.
Windows have segmental heads, except centre bay, which has a broken stone
architrave on 2nd floor. Central tall half-glazed double doors on 1st
floor in elaborate arched surround of double panelled pilasters, flaming
obelisks, and segmental double dentilled pediment. Architrave and key
block to arch, and false panelled radiating fanlight. This door formerly
approached by double flight of stone steps with balcony landing. The latter
with modern brick parapet remains.

The north front is of similar character, but the central door has Doric
surround of fluted pilasters and entablature with triglyph frieze, and
dentilled cornice with guttae enrichment. This door approached by a very
wide flight of stone steps, with moulded nosings and slightly curved
outwards towards the bottom, with delicate wrought iron guard rails,
scroll ornament and urn topped standards.

The East and West fronts are of similar character, with small central
projections crowned with pediments.

The interior has contemporary panelling and enriched fireplaces. Entrance
hall is grandise and boroque with giant Tuscan columns and metope frieze
above through half storey.

(At Hale House, Wilts, T Archer's home, and where he is buried, the design
of the chapel door is very similar to the South doorway of Marlow Place).