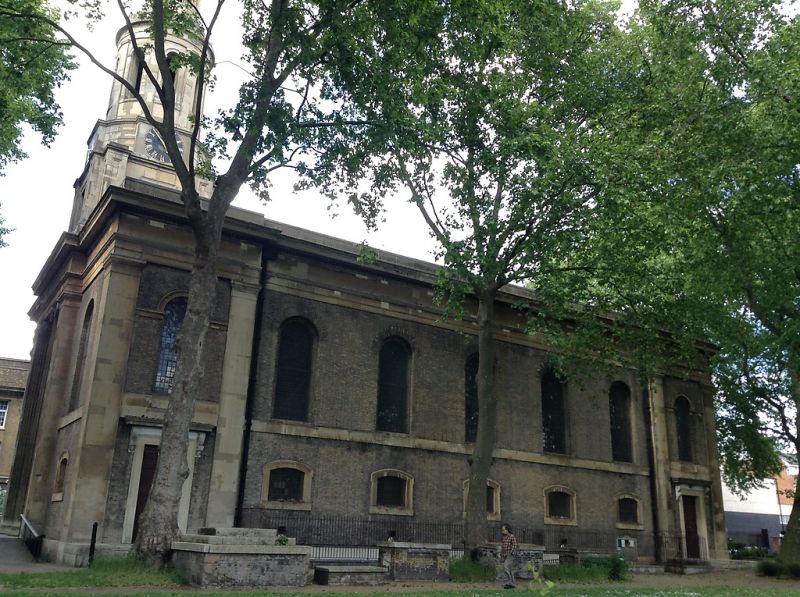 EXTERIOR: A large and impressive Classical-style church built at the cost of the Church Building Commissioners. Externally it appears as a single vessel with a tower projecting out of the W end and with a plain parapet all the way round. At the E end the central bay is brought forward to accommodate the altar and is framed by pairs of flat limestone pilasters. The church has symmetrically arranged side elevations. These have rectangular doorways placed in the end bays which are brought forward very slightly and are framed by flat pilasters. The windows are in two tiers with small segmental headed openings below and much taller round-headed ones above: between is a horizontal limestone band. The two-tier window arrangement is an expression of the presence of galleries internally. The band between the windows continues all the way round the church, broken only by the flat pilasters and the bay containing the W entrance, and emphasises the horizontal division. At the W end the middle bay of the three bays has two giant Ionic columns in antis either side of the rectangular doorway. Behind the entrance the tower projects through the roof, initially square and then turning to two circular tiers terminating in a cupola. The lower of the two circular stages has flat pilasters between eight single-light round-headed openings; the upper stage is differently organised with single-light openings to the cardinal directions and paired Ionic demi-shafts in between.

INTERIOR: The interior retains much of its original Georgian character in terms of its plan, the galleries round three sides and the flat ceiling. Superimposed on all this are Victorian and Edwardian restorations and the late 20th-century partitioning off of the W area under the gallery. The galleries are supported by wooden Tuscan columns and have panelled fronts. Fortunately and fairly unusually they retain their original seating which is an important survival of a mixture of pews and open-backed seating. A defining characteristic of the present building is the rich decoration of the ceiling and paintings flanking the E window by J A Reeve (1850-1915) of 1902-14 and restored to their original appearance in 1993-4. The ceiling has angels of the Apocalypse in square panels on a blue ground. This exceptional scheme was described in 1989 (quoted in guide): `Stylistically the angels and other figures are treated in an accomplished late romantic manner and are more painterly in execution than one would anticipate even from a celebrated firm of architectural decorators. The wings of the angels in particular display a subtleness of modulated tone and colour which puts one in mind of the later followers of Burne-Jones. The decorative settings of the figures are rich and bold while the border strips which divide the great expanses of ceiling into compartments are in the slightly muted idiom of Burges. There are also traces of an Art Nouveau arabesque freedom. The overall effect is literally splendid.' The W end was screened off for a variety of uses by oak and glass partitions in 1995.

PRINCIPAL FIXTURES: The seating in the body of the church is Victorian with shaped ends to the pews although, as noted above, the seating in the galleries is an important survival from 1820, although the doors to the pews there have been removed. The wooden pulpit is approached up a flight of steps and is mounted on wheels so it can be retracted underneath the galleries. There are a few wall monuments, notably that to A F Kelly (d 1864), incumbent here for 38 years, by M W Johnson of Euston Road. There is a polygonal mid-Victorian font, 1865, on a shafted base which is a memorial to Kelly. Following war damage the stained glass is post 1945.

SUBSIDIARY FEATURES: There are fine wrought-iron railings on the S and E sides of the churchyard. Mounted in the S boundary rail, between the churchyard and the pavement is a polished granite drinking fountain erected by the Metropolitan Drinking Fountain and Cattle Trough Association.

HISTORY: The church was built as a chapel of ease to St Leonard's, Shoreditch, and was funded by the Church Building Commissioners under a £1m grant from Parliament in 1818 intended to provide Anglican places of worship in places such as this, of rising population and without adequate Established church accommodation. It was consecrated on 22 June 1826. The cost was £15,394 (£16,444 including the graveyard) and the building originally had 1732 sittings of which 1066 were free (Port). Francis Edwards (1784-1857) entered Sir John Soane's office as an improver in 1806 and was admitted to the Royal Academy Schools two years later. He won both silver and gold medals there and exhibited at the Royal Academy between 1809 and 1830. He left Soane's office in 1810 and then assisted his former fellow-pupil H H Seward for four days a week until 1823 when he devoted all his time to his own practice. His work encompassed many building types and perhaps his best-known building was the now-demolished Lion Brewery which was one of the landmarks of the South Bank, close to Westminster Bridge.

The church was given a refitting in Victorian times and received an exceptional scheme of decoration in 1902-1914 by Joseph Arthur Reeve (conserved early 1990s).

REASONS FOR DESIGNATION:
The church of St John the Baptist, Hoxton, is designated at Grade II* for the following principal reasons:
* It is of high importance as a church built in Classical style by the Church Building Commissioners under the Parliamentary grant of £1 million in 1818, and is a good example of a Commissioners' church.
* It retains its floor plan intact and its galleries and their seating are an important survival.
* It has an exceptional decorative scheme from the early 20th century, executed by J. A. Reeve.