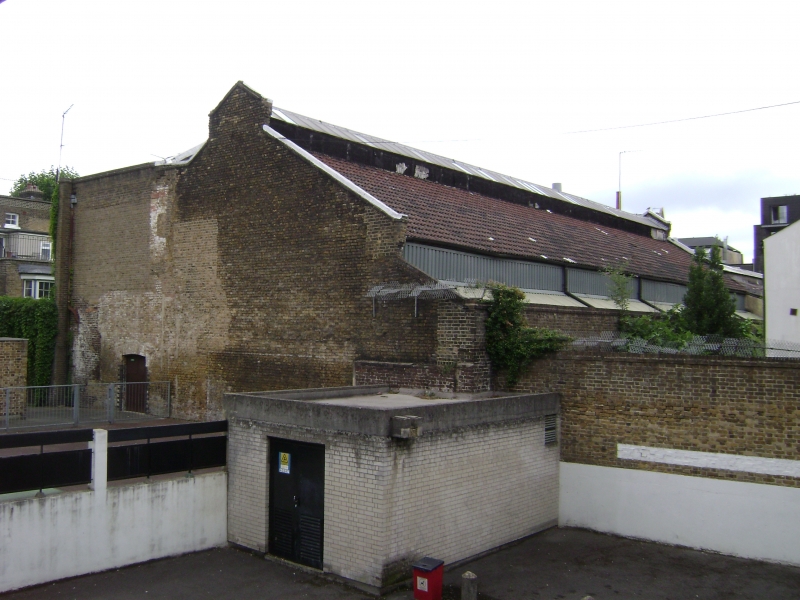 The adjacent east range, originally a covered yard for the LGOC, is excluded from the listing.

Stables and Carriageway Entrance Building at the Former LGOC Pitfield Street Depot, 1895. The adjacent east range, originally a covered yard for the LGOC, is excluded from the listing.

MATERIALS: constructed from buff stock brick with a tiled roof, with sections of modern cladding and glazing.

PLAN: the building has a rectangular footprint between the terraces of houses on Buttesland Street and Haberdasher Street and is accessed via a carriageway arch at 66A Buttesland Street. The adjacent eastern range, once the associated covered yard, is excluded from the listing.

EXTERIOR: the position of the building between the backs of the two terraces of houses means that the external walls are not generally visible. The west gable however, is exposed, and illustrates the form of the stable: the double-pitch roof indicates the aisles which stand beneath the lower pitch, and the first-floor stable is beneath the upper pitch, lit by a ridge lantern running its length. The east gable, originally overlooking the covered yard, and visible from Pitfield Street, has four blind windows with projecting sills.

The carriageway entrance is at 66A Buttesland Street; it is a wide, three-centred arch in gauged brick, and the sides are lined in blue engineering brick with curb stones at the base, to withstand collisions. There are timber plank double doors with iron straps enclosing the forecourt. Above the archway are three floors of accommodation; the first and second floors each have two windows with segmental arched heads, and the third floor has an oeil de boeuf in the shallow gable.

INTERIOR: the stable has aisles running the length of the north and south sides. These have kingpost roof trusses and a glazed outer pitch. Between the aisles, on the ground floor, are four large bays separated by load-bearing brick walls and cast-iron columns and timber beams supporting the hollow-tile ‘fireproof’ floor above, which retains the ‘Patent Paving and Construction Co’ surface paviors. There is a shallow stair at the east, with later concrete treads overlying the original ceramic-pavior horse ramp, leading to a heavy fire-proofed stable door with iron strap hinges and fixings. The first floor is open to the roof, which has queen post trusses and a glazed ridge lantern. The walls are bare brickwork, and there is a plastered band along both long sides. Towards the east end are taking-in doors, and at the west end a substantial timber stall partition on a low brick wall, with a cast iron newel (bearing the LGOC motif). A sloped ramp leads into a small room with a heavy timber roof structure with a clerestory light.

The interior of 66A Buttesland Street was not inspected.

In around 1894 The London General Omnibus Company (LGOC) acquired the freehold of a large rectangular site belonging to the Haberdashers Company that extended from Pitfield Street between the rears of the terraces of Buttesland Street, Haberdasher Street and Singleton Street (no longer extant). The premises, known as the Pitfield Street Depot, was built by G Parker of Peckham, with steelwork by Newton Chambers Co, and opened in December 1895. It was described by the Shoreditch Observer as ‘a fine large depot’, ‘a substantial and serviceable building, with healthy and comfortable accommodation for 180 horses. … The entrance for ‘busses is in Buttesland-street, a large yard being set apart for their accommodation, and abutting from the yard are several spacious loose boxes for sick horses, with caretaker’s house and all the necessary accessories’ (7 December 1895). The houses at 65 and 66 Buttesland Street were also acquired by the company, and 66 (now 66A) was rebuilt to provide access for the omnibuses; the accommodation above may have been intended for the caretaker or other staff. The carriageway entrance was initially into a large yard, which abutted several loose boxes for sick horses. During the course of construction the LGOC decided there was sufficient room to construct another building abutting the western end of the existing stables building, accessed from Singleton Street; this was demolished in the 1960s.

By 1900, the LGOC had 118 premises with stables, and carried around 2 million passengers daily. Pitfield Street was the fifth largest premises in the metropolis, and the largest in the North Eastern District, with a capacity to stable 397 horses. At that date, the largest facilities were Alfred Place, Upper Holloway (893 horses); Windsor Castle Yard, King Street, Hammersmith (468 horses); Chelverton Road, Putney (457 horses) and Dollis Hill, Cricklewood (410 horses) (List of premises in the occupation of the London General Omnibus Company, Limited, 31 December 1900, LMA).

Motor power began to overtake horsepower in the early C20, and the last LGOC horse-drawn omnibus ran on 18 October 1911 (The Observer, 1 October 1911). The LGOC sold the leasehold of most of the site to the Eastern Motor Wagon Company, which made it its headquarters and whose fleet of 31 steam lorries undertook local haulage work, much of which was for local brewers. A photograph from October 1911 (The Commercial Motor) shows the interior of the former covered yard, east of the present stable; from this it is apparent that the roof has been raised, and the cobbled floor lost. The Pitfield Street end of the site was rebuilt in 1913 as the Hoxton Cinema, now demolished. The premises was acquired in the early 1930s by Cromer Cars, who made further changes to the former covered yard, inserting the concrete mezzanine gallery which was originally fitted with a gantry and overhead travelling crane. In around 1934-1940 parts of the complex was occupied by Ramus Tile Co Ltd, and in the Second World War the building was leased by the government and used as a mortuary. Between 1965 and 2018 the premises was occupied by Wharfside, a furniture company.

The stable building has undergone little alteration; areas of the textured floor tiles, and the ramp between the ground and first floors have been covered in concrete though are likely to survive underneath. The roof, originally covered in slate, is now tiled.

The stables and carriageway entrance building at the former LGOC Pitfield Street Depot, 1895, are listed at Grade II for the following principal reasons:

* a rare survival of an industrial multi-storey stable in an urban setting which retains a significant proportion of its historic fabric, and which, along with the carriageway entrance building, clearly illustrates its original function;
* a largely complete, robust and good-quality construction, and at a scale which reflects the prosperity of the LGOC at that time;
* the plan of the stable is unaltered, and it retains characterful features internally which provide evidence of the origins of the building, including sloped ramps and a stall partition with an LGOC motif.

* the LGOC was the largest omnibus operator in the capital in the C19, transporting 2 million passengers daily at its height, and thus was a crucial element of the capital’s transport network; the stables are a rare remnant of this important company.