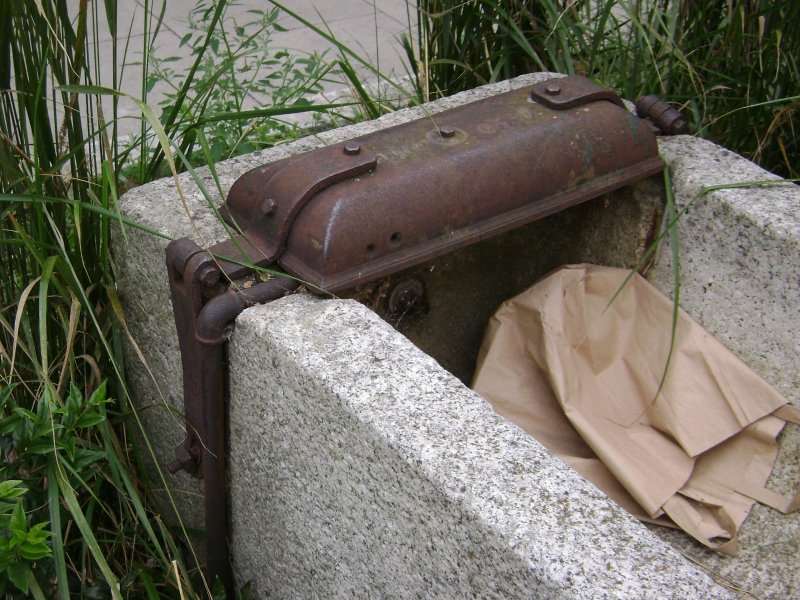 A MDF&CTA standardised type 1c granite drinking trough donated by Edith H Melvill and erected in 1910 in memory of the family dog Jill.

DESCRIPTION: the trough is an example of a type 1c granite drinking trough, and is approximately 9ft 6in long. It is made of granite and consists of a water tank on squat rectangular granite piers. The spout and pump mechanism is missing.
An inscription bearing the name of the Metropolitan Drinking Fountain and Cattle Trough Association is engraved, as well as a dedication which reads 'IN MEMORY OF / A BELOVED FRIEND 1910'

In the C19 provision began to be made for drinking troughs for cattle, horses and dogs, and these were often provided by charitable associations. These included The Metropolitan Drinking Fountain and Cattle Trough Association (MDF&CTA), founded in 1859 as The Metropolitan Free Drinking Fountain Association, the name altered in 1867 to include troughs. They were responsible for over a thousand troughs in Britain and overseas, about half of which were located in London. Early troughs of iron or wood are particularly rare, and were usually replaced from the 1860s by granite, mainly dating from the late C19, mostly following a simple set design.

The trough was donated by Edith H Melvill , who was the daughter of Henry and Elizabeth Melvill. He was an officer in the Bengal Cavalry and took part in the suppression of the 1875 Indian mutiny. His wife and children returned to live in England in 1871. The trough is dedicated to a ‘beloved friend’. This was the family pet dog Jill who had died in 1908-9. This is not explicitly inscribed on the trough as the Secretary of the MDF&CTA, Captain Simpson, persuaded them to remove the word dog from the inscription, due to heightened tension because of the vivisection riots in 1906-1909.

The trough first appears on the 1951 Ordnance Survey and appears to be in its original location.

The horse and cattle trough, Pitfield Street, Hackney is listed at Grade II for the following principal reasons:

* as a good example of one of the MDF&CTA’s standardised designs.

* as an eloquent, and now rare, reminder of the now-vanished presence of animals on our streets.