Grotto and Arches on Grotto Hill 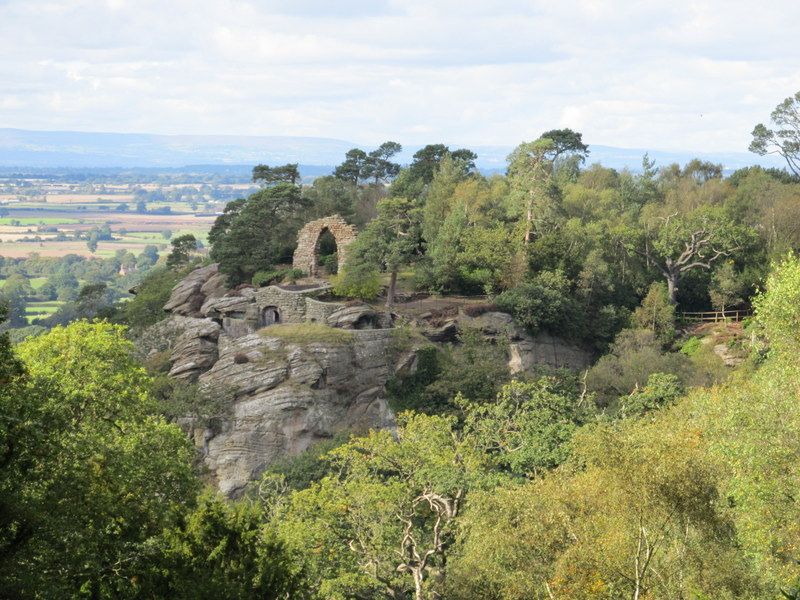 Grotto. Early to mid-C18 for Sir Richard Hill, builder of Hawkstone Hall (q.v.
under Hodnet C.P.), continued for his nephew, Sir Rowland Hill and considerably
embellished and extended for the latter's son, Sir Richard Hill, second
baronet of Hawkstone, in late C18. Grotto hollowed out of natural sandstone,
possibly making use of existing caves, regularly coursed and dressed sandstone
arches at southern entrance, that to front enclosing atrium, which formerly
had gabled roof. Pointed arch above served as eye-catcher from below.
The original entrances to the grotto were from the path cut in the rock
on the west face of the hill but in late C18 a long dark subterranean passage,
possibly originally created for the first Sir Richard Hill, was apparently
rediscovered and cleared out. Interior: large number of chambers and passages
with columns and crude 'vaulting' left by excavation, top-lit by portholes
formerly filled with stained glass. At least one round-headed arch has
'rusticated voussoirs'. Several of the chambers were formerly decorated
with shells, corals, ore, jet and other encrustations (some of which survive
in one of the side chambers off the south entrance) but these and the stained
glass were destroyed in 1940s. After inspecting the interior of the grotto,
visitors found themselves at the edge of the 'awful precipice' below the
southern entrance and could find relief in the rock-cut seat to the right.
They were then ready to re-enter the cave, to depart through the western
entrance, and to begin the walk across the so-called Raven's Shelf in preparation
for the 'arduous' descent. B.O.E. pp.145-6; C.L. (July 10, 1958) pp.72-4;
C.L. (May 9, 1985) pp.1246-7; sketch-plan in Barbara Jones, Follies and
Grottoes (2nd edn. 1974) p.82.