A Grade I Listed Building in Kippax, Leeds 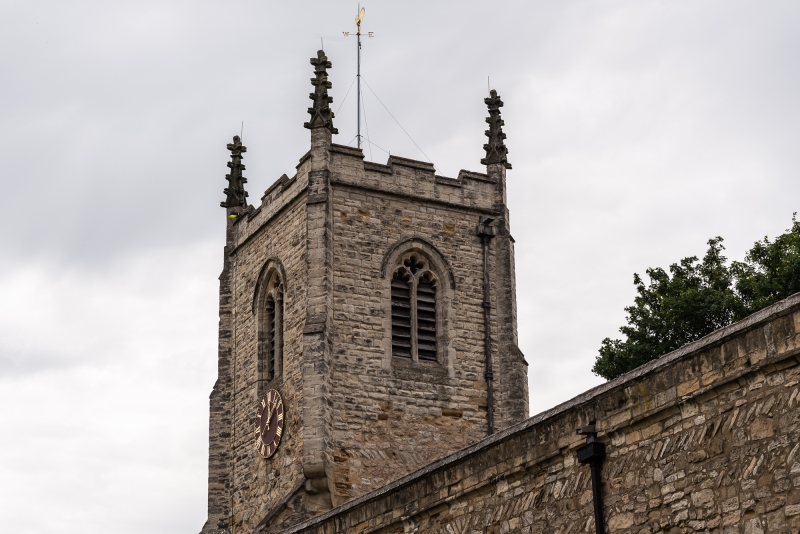 Church. Anglo-Saxon or early Norman, altered at various dates. Magnesian
limestone rubble mostly in herringbone courses, with quoins; low-pitched
lead-clad roof concealed by a parapet. West tower, nave, chancel, and C19
vestry. The tower (top stage remodelled probably in C13), has diagonal
buttresses of that period, a round-headed lancet in each of the south and
west sides of the 1st stage, two-centred arched belfry windows of 2 cusped
lights with stone louvres, and an embattled parapet with C19 crocketed corner
pinnacles. The south side of the nave has a small two-centred arched doorway
with chamfered surround and hoodmould, protected by a gabled porch of large
coursed blocks, with a moulded two-centred arched outer doorway, and a roof
truss with cambered tie-beam and short octagonal crown post; each side of the
porch is a deeply recessed two-centred arched window with moulded surround
and straight chamfered mullions making three lights, and further right a
4-centred arched 3-light window with similar mullions, and a C19 arched
2-light window. The north side of the nave has a doorway similar to the
south door to the right, and above this the remains of the right-hand half of
a former round-headed opening, to the left patched masonry suggesting two
former windows (perhaps Perpendicular), and at a higher level three
round-arched lancets like those in the tower but under a simple extrados with
stops. The line of a former steeply-pitched roof is visible on the east wall
of the tower, and part of the gable remains as a sloped parapet at the west
end. The chancel, also of herringbone masonry, but with a steeply-pitched
slate roof, has a small round-headed priest doorway with chamfered surround,
a C19 window to the left, a tall window of 2 lancet lights to the right, and
a large recessed 2-centred arched east window of 4 lights with intersecting
tracery and moulded surround.
Interior: purlin roof carried by cambered beams with arch bracing to short
wall-posts supported by stone corbels; round-headed tower arch; depressed
2-centred and double-chamfered chancel arch springing from moulded
semi-octagonal corbels; in south-east corner of chancel a double piscina (or
piscina and aumbry), one part in each wall, with corner colonnette, moulded
extrados; attached to wall to right of chancel arch, fragments of a Saxon
cross with carved human figure; octagonal cup-shaped font dated 1663, and
elaborately carved font cover with foliated panels and ogee cresting; various
wall monuments to members of Bland family of Kippax Park.