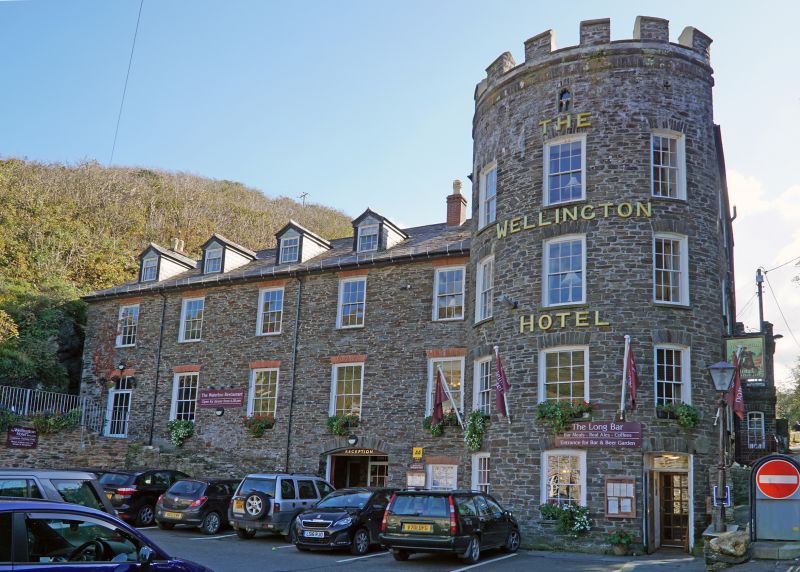 Coaching house, now public house and hotel. Possibly with C17 origins, largely
rebuilt in 1853. Slate stone rubble. Front range, probably dating from 1853, has
slate roof with hipped ends and brick end stack on left. Higher range on right with
canted slate roof and castellated parapet. Wing to rear right with gable end and
lower wing to rear has bitumen coated rag slate roof with hipped end. Across the
rear elevation is a 2-storey wing, probably part of the earlier building which has a
rag slate roof with hipped ends.
The original plan of the coaching inn is uncertain as the building has been extended
and remodelled in C18, C19 and C20. The river Jordan flows underneath the
building and the old road, which ran parallel to the river, originally passed through
the coaching inn. The rear wing may be part of the earlier building although it has
been remodelled and incorporated into later extensions. Overall 'U' shaped plan;
front range of single depth plan with carriage entrance now blocked by reception.
Rear wing on right continues parallel with the road and is returned at right angles
parallel with the front range.
Front range has a 3 storey elevation near centre, 2 storey elevation where the ground
rises to the left and a 4 storey elevation to the right. Overall 5:1 window front.
To left segmental dressed stone arch to carriage entrance and 12-pane sash on ground
floor. First and second floor with five 12-pane hornless sashes with crown glass and
brick segmental arches. To the right, the tower-like extension of 4 storeys with a
castellated parapet has a curved facade with entrance to right and 2 hornless 12-pane
sashes on ground floor. First, second and third floors each have three 12-pane
hornless sashes and a possibly C15 stone window which has been reset below the
parapet. The rear wing on right has a 4-storey 3-window elevation with 12-pane
hornless sashes and the lower 2-storey wing beyond has 12-pane hornless sashes and a
battlemented parapet above the circa early C20 2-storey entrance porch. 2-storey
rear wing with brick segmental arches to openings.
Interior remodelled on ground floor with 1 long serving bar in right-hand wing. 4
stained glass windows from the Royal Hotel, Bodmin which commemorated Queen
Victoria's visit to Bodmin in 1846. Lamps possibly designed by Thomas Hardy,
originally used in St Juliot's Church (qv Church of St Julitta, St Juliot). The
fireplaces have been largely remodelled with C20 grates and the ceiling beams are
unmoulded and roughly cut.
The Wellington Hotel was originally known as the Bos Castle Hotel, renamed in 1852
after the Duke's death.