A Grade I Listed Building in Witham on the Hill, Lincolnshire 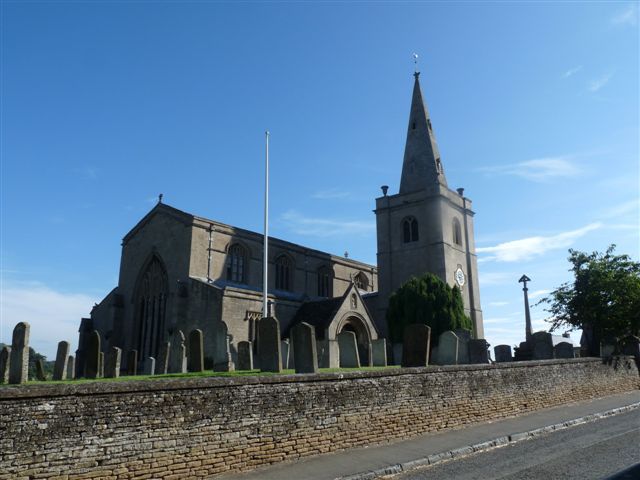 Civil Parish: Witham on the Hill

Built-Up Area: Witham on the Hill

Parish church. Late C12, C13, C14, C15, 1737-8 by George Portwood, restoration 1874, 1912. Clerestoried nave, aisles, south porch, transepts and south tower, chancel. Ashlar, lead and Collyweston roofs. The west end of the nave has moulded plinth and band, with short stepped and gabled buttresses having crockets and projecting heads. In the gable the steeper pitch of an earlier roof can be seen. Double moulded parapet. The C15 west window is of 5 lights with cinquefoil heads and panel tracery, hood mould with human head stops. The south aisle has 2 three light C 14 windows with flowing tracery and hood moulds. The north door with continuously deeply moulded pointed surround. To the east is a small niche with triangular head and hood and an inscribed cross below. The north transept has a4 light C15 window, recut C19, with panel tracery and in the east side a 3 light C15 window with moulded 4 centred headed surround and C19 panel tracery. The clerestory has 4 C15 3 Light windows with cusped heads to the lights, panel tracery and linked hood moulds. The chancel with Collyweston roof has in the north wall a 3 light C15 window with flat 4 centre arched head and cusped ogee heads to the lights. Beyond is a blocked doorway. The east window is of 3 lights with recut panel tracery. The south wall of the chancel has 2 C19 3 light windows and a small doorway. The south transept has a single 3 light C18 window, with semi-circular head. The C18 south tower is of 3 stages having clasping buttresses, 3 string courses, plain parapet and angle urns. Recessed spire with 2 tiers of ogee lucarnes with trefoils. The belfry stage has paired lancets in double chamfered semi-circular headed surrounds. In the south wall a window with an apron and Gibbsian surround with stepped keylock. In the middle stage is a cast iron faced clock set in a cruciform architrave. Above an inscription records the building of the tower in 1738. In the west wall is a doorway with plain chamfered surround and keylock. Clerestory matches that to the north In the aisle is a 3 light C19 window with C15 4 centred arched surround and a second C19 3 light window with C14 surround and moulded hood. In the west wall is a small round headed Light. The C18 gabled south porch in Romanesque style modelled on the inner doorway with a stepped and moulded outer round arch having paired collared nook shafts with waterleaf capitals. Above is a round headed dogtoothed niche containing a statue of St. Andrew. Side benches. Late C12 inner doorway having stepped and chamfered rounded head with hood, and single nook shafts with waterlea1 capitals. Above a later niche containing a fragment of statuary.
INTERIOR. 4 bay south arcade, late C12, restored C19, with circular piers, tall moulded bases, waterleaf capitals, double chamfered rounded arches, chamfered hood with human and angel head stops. 4 bay C13 north arcade with double chamfered pointed arches, octagonal piers and responds, on large C12 circular bases. In the aisles are double chamfered arches opening into the transepts, and in the north transept is a narrow squint to the main altar. Nave has tie beam roof of crown post roof on C15 grotesque corbels. C19 moulded and pointed chancel arch. In the chancel east wall a reset C13 pointed niche and an engaged octagonal column with stiff leaf foliage. Fittings. Largely C19 or C20 including oak rood screen of 1912. 2 chests, one dated 1683. 2 C15 painted panels, depicting St. Stephen and St. Laurence, formerly in the rood screen. c.1660 octagonal font, on C19 base, with foliage, chevrons and a cross to the panels. (19 tall elaborate font cover. Monuments. In the chancel east wall a small brass to Robert Harrington died 1558 and his wife Alice died 1565. A fine brass in the centre of the chancel floor to Rev. cooley, d.1953.