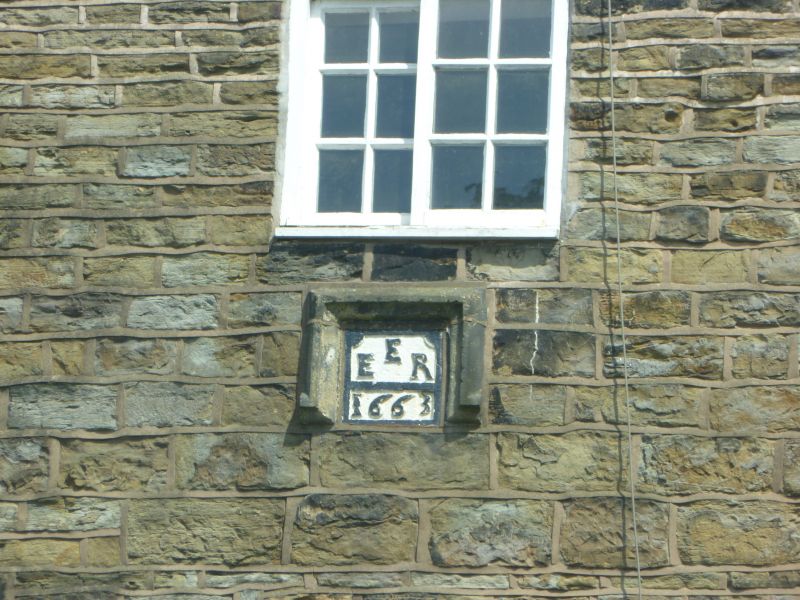 Farmhouse. Dated 1663 on 2 datestones in west gable and 1756 on one datestone in south front; apparently remodelled in C18 or C19, and altered Coursed sandstone rubble and coursed squared sandstone, slate [?] roof. Now a double-depth double-fronted 4-room plan on an east-west axis facing south, but probably formerly on a north-south main axis facing west. Two storeys with basement and attic, with a high chamfered plinth carried round the whole. The 2-window south front has a C20 porch offset right of centre, a datestone above this inscribed:
I A
I
1756
one 5-fight mullioned window on each floor to the left, both with chamfered sills, ovolo-and-fillet mullions and cavetto-moulded hoodmoulds (the hoodmoulds to the upper windows suggesting that this was formerly a gable wall), and one large square 6-light casement on each floor to the right, both with straight cornices. Gable chimneys. The left gable wall has similar mullioned windows on each floor, of 2 lights to the left and 3 to the right, all blocked except the upper right, and only those at ground floor with hoodmoulds (the lack of hoodmoulds to those at 1st floor suggesting that they were formerly protected
by eaves on this side); an attic window, and datestones above and below this with raised lettering, the upper: I R 1663
O I
and the lower:
E
E R
1663
Rear: the basement has a Tudor-arched doorway at the east end, and the hoodmould of a former cellar window in the centre; otherwise, the west portion has a doorway near the corner, and hoodmoulds over an altered window on each main floor, and the east portion has a rectangular 30-pane stairwindow and one small-paned sliding sash cross-window on each floor to the left. Interior not inspected but said to have small beams and doglegged staircase with flat balusters. Forms group with associated barn on opposite side of lane (q.v.).

These buildings were formerly listed under the Urban District of Skelmersdale and Upland. Due to boundary changes they are now included in the ninth list dated 9 August 1988 under the Parish of Wrightington.