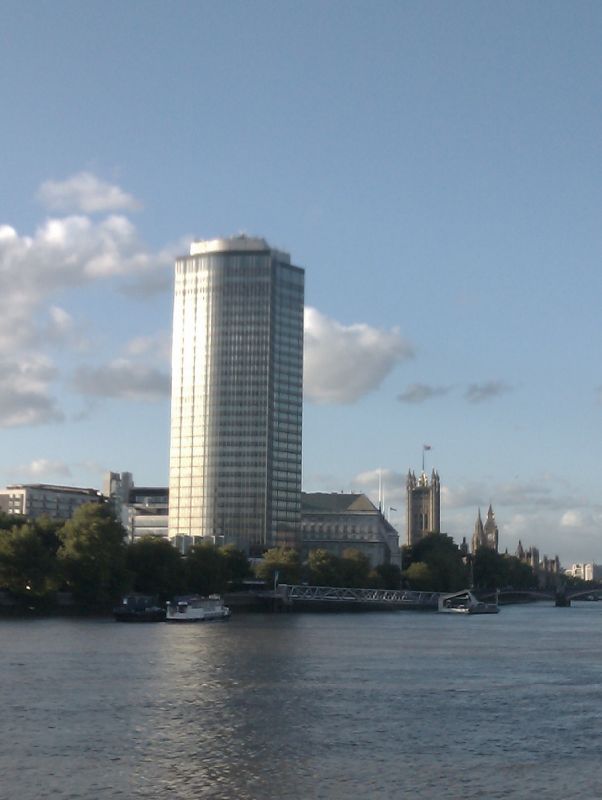 EXTERIOR
The listed building comprises three main sections: a 31-storey TOWER on a 2-storey PODIUM on columns, with 8-storey curved office BLOCK. The 11-storey residential tower to the west of the site is not of special interest.

Four-sided TOWER with curved sides, two concave (to east and west) and two convex (to north and south), crudely resembling a butterfly or diabolo on plan. The tower has glass curtain-walling, which reflects the constantly moving river below, with opaque panels of blue glass below windows and black panels to narrow storey bands; narrow opening vents to top of alternate windows. The top floor of the tower, which mostly contains plant, also features a narrow perimeter viewing platform to all sides with magnificent views.

The tower is set on a long 2-storey PODIUM raised on pilotis or columns, which has irregular curved courtyard of paved driveways and walkways to north of tower. The upper two storeys of the podium are united with curtain-walling between two horizontal concrete bands. For most of its length the podium is straight, but has a gentle convex curve at its northern end. The ground floor is mostly open at ground level with two parallel rows of circular columns, except for the main entrance foyer, which is glazed from floor to ceiling with steel-framed doors and windows. There is an open-air, dog-leg staircase with metal balustrade from ground floor into the raised podium towards the northern end. At the far north end, the ground floor is fully glazed and slightly set back so that the podium overhangs; this houses a restaurant with service areas along its return elevation where it links with the car park. At the south end, the podium incorporates a trapezoidal cinema/conference hall and restaurants. This end is clad in grey slate panels at the ground floor and features a cantilevered concrete staircase to the rear. Extending to the south are low planters of cast concrete panels. Surmounting the upper levels of the podium are partly-glazed zig-zag panels. To the west side of the tower and nestled in a curve of the Y-shaped tower, is a landscaped garden.

At the north-west end of the site, the podium is surmounted by a Y-shaped, 8-storey BLOCK with complementary concave curved sides, clad in curtain walling with expressed concrete storey bands with mosaic cladding. It is continuous with and identical to the wall treatment within the concave curved courtyard. It features metal-framed windows with opening vents to top of alternate windows and opaque glass panels beneath windows. Its western corner features a full-height curved rendered corner tower.

A 3-storey car park on the north part of the site features a circular ramp with radiating concrete beams which complements the concave curve of the adjacent ‘Y’ BLOCK and has special interest, although the remainder of the car park, which only features similar concrete columns, is of lesser interest. It links to the west with the residential block, which is not included in the listing. The boiler house is situated beneath the residential block and partly sunk into the ground. It features some original controls for the machinery but is not of special interest.

INTERIOR
Much modified from the original. The original Vickers boardroom at top of main tower, which had timber panelled walls with relief models of ships inset, was removed with listed building consent around 2000 when Vickers ceased their occupation of the building.

The entrance lobby is largely open plan with a mezzanine punctuated by prominent rectangular piers. The marble in the entrance lobby (white on the floor, black cladding the piers and russet to the rear wall) was largely replaced c.2000 but reflects the original scheme, albeit with different colouring. The internal reception desk and turnstiles for entry to the offices were reconfigured at this time too. The original clock and original bronzed lettering remain, as do original steel doors into the cinema/conference hall part of the podium, known as Media Centre Cinema. The main doors to Millbank from Millbank Tower are also original.

The office floors are mostly open plan around a central lift and service core. The windows have secondary glazed units that open internally. The office floor interiors have been much altered by successive tenants and are devoid of special interest.

The reception into the 8-storey block (known as 30 Millbank) has been refurbished but retains original black marble panels to the walls, white marble columns on the floor and exposed concrete columns. The main doors into this reception are also original. The upper levels were not inspected. Where original fittings and finishings survive, these are of special interest.

Millbank Tower was built as the Vickers Tower for the Legal and General Assurance Society, in conjunction with the British engineering firm, the Vickers Group, from which it took its original name and whose boardroom was on the 30th floor. It was designed by Ronald Ward & Partners (Douglas Marriott, job architect) which began designs in 1956, with planning permission granted the following year, and endorsed by the Royal Fine Art Commission in 1958. At 387 feet (118 metres) and 32 storeys, it was briefly the tallest building in London, until 1965 when it was surpassed by the GPO tower. The River Thames had been identified as a suitable location for tall buildings early on in post-war planning policy, although there was concern that the Vickers Tower might dominate the Houses of Parliament. However, later it was its appearance in views down St. James’s Street that were the cause of criticism, as well as its relationship with the river. However, Ian Nairn described it in his Modern Buildings in London (1964) as ‘the only London skyscraper to have the clean zest and élan, literally sky-reaching and skyscraping, of the best in New York.’ It has latterly been more universally praised for the successful shape and composition of the tower (with its concave and convex shapes) and the effective way that the curtain walling and Britain’s first use of projecting stainless steel mullions reflect playfully on the adjacent Thames and vice versa. The curved butterfly or diabolo form was derived from the original plan for the lifts, and later retained after this arrangement was modified. The design was also of interest for its early experimentation of entasis (the deliberate swelling of form, to preserve the visual impression of straightness) in the tower, as also at Centre Point and Britannic House.

The Milbank Tower of 1959-63 by Ronald Ward and Partners is listed at Grade II for the following principal reasons:

* Architectural form: an elegant tower of distinctive, concave and convex form rising from a complex podium on columns, with a complementary Y-shaped lower block, together forming a sinuous composition of modern buildings skilfully designed with modern materials.

* Historic interest: one of the first tall buildings in London to be built along the river Thames, which was identified for such development in the early post-war plans for London. It also was an early experiment with entasis and Britain’s first use of projecting stainless steel mullions.

* Relationship with site: the tower cuts a distinctive profile on the river Thames, with which it has a symbiotic aesthetic relationship: the ever-shifting river and clouds reflected in the good-quality curtain walling of the tower and the podium.