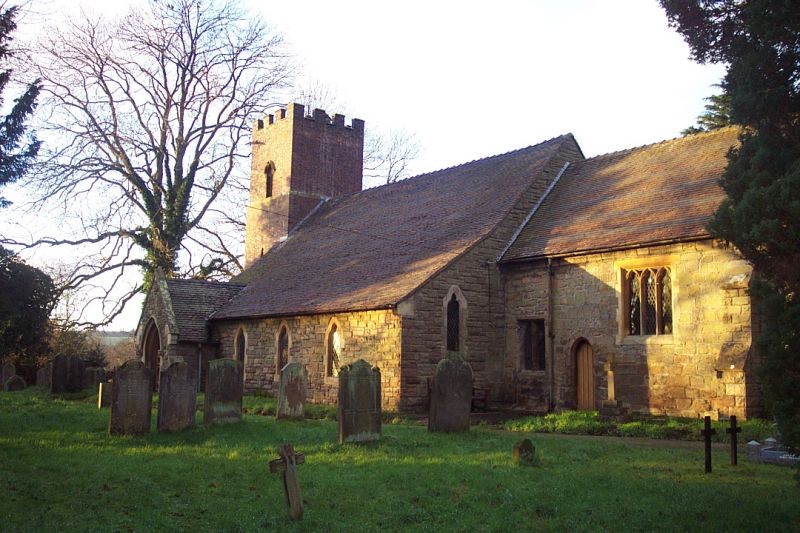 II*
DATES OF MAIN PHASES, NAME OF ARCHITECT: Parish church of C12-C14, with nave and west tower rebuilt 1732, restoration in 1870 by Habershon & Pite.

EXTERIOR: The nave north side and tower are both brick with ashlar lower courses, and in marked contrast to the masonry of the rest of the church. The nave has four 2-light Decorated windows. The 3-stage tower with embattled parapet has a 2-light west window similar to the nave, narrow pointed windows in the middle stage, and pointed openings with louvres to the slightly narrower bell stage. The south aisle has 3 cusped south windows and porch in the first bay, which has an entrance with continuous moulding and hood with head stops. The buttressed chancel incorporates older fabric, including part of a billet cornice that is possibly C13. The south side has a C13 chamfered doorway, 2-light and 3-light square-headed windows, and cusped window in the extended section at the east end. The 3-light Decorated east window is C19.

INTERIOR: The C12 chancel arch has nook shafts with scalloped capitals, and chevron and billet moulding to the arch. The tower arch is segmental-pointed, probably C18. The 4-bay south arcade has alternate round and octagonal piers and double-chamfered arches. The 3-bay north arcade was infilled in the C18 but is visible internally, and has octagonal piers and single-chamfer arches. The 1870 3-bay chancel roof has tie-beam trusses strengthened by arched braces. The nave has a 4-bay king-post roof, probably C18. Walls are plastered. Floors have tiles, including medieval 2-colour tiles in the nave, with raised wood floors below benches.

PRINCIPAL FIXTURES: In the north wall of the chancel is a C14 tomb recess with simple cusping, and worn recumbent effigy holding a heart on its chest. The plain tub font is on a later broad stem and base. The wooden pulpit is a 1914-18 war memorial, and has round and pointed arches. The nave has plain pine square-headed benches with moulded edges, and the choir stalls have poppy heads. The chancel has communion rails with turned balusters, and stone reredos of arcades under crocketed gables, with scenes in relief from the life of Christ.

HISTORY: A church of C12 origin, of which the chancel arch has survived. Surviving nave arcades show that the church was enlarged in the C13 and C14. In 1732 the nave was rebuilt, infilling the north arcade after the north aisle was taken down, and the present tower was built. The church was restored in 1870 by W.G. Habershon (1818-92) and A.R. Pite (1832-1911), architects of London. They rebuilt the south aisle and porch, extended the chancel and added a north vestry.

REASONS FOR DESIGNATION: The church of St Peter, Gayton, is listed Grade II* for the following principal reasons:
* For the extent of its C12 fabric, including C12 chancel arch and C13-C14 arcades.
* It has interior detail of interest including a C14 tomb recess with effigy, and medieval floor tiles.
* For the historical interest of its C18 nave and tower.