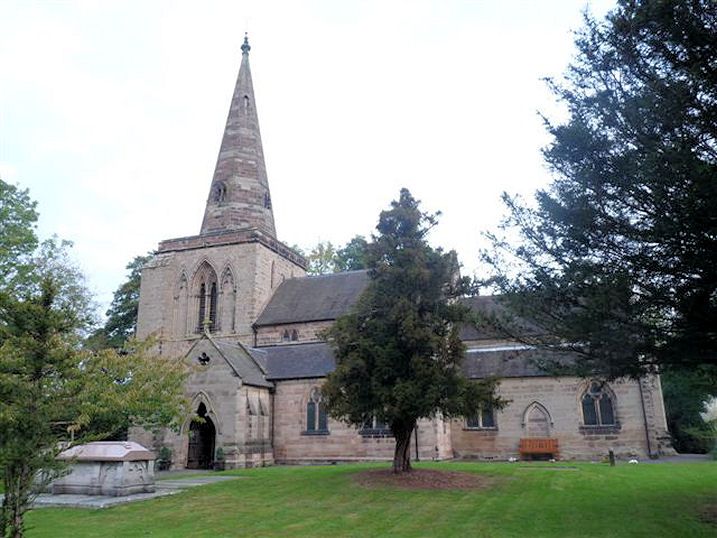 MATERIALS: Ashlar with tooled C19 masonry to the chancel, tile roofs, except for copper roof of south aisle.

EXTERIOR: The broad 2-stage early C13 tower has moulded strings, massive clasping buttresses and internal south-west turret. The large lancet west window has a double-chamfered surround, with smaller lancets on north and south sides. Tripartite arcading in the upper stage has blind outer arches, and inner arches subdivided and with louvres. The parapet and octagonal stone spire with lucarnes were added in the 1830s. The remainder of the exterior is almost entirely C19. The nave has 3-bay aisles under lean-to roofs, with 2-light and 3-light Decorated windows, and paired and triple clerestorey windows with trefoil heads. The tall buttressed porch has re-used C13 trefoil-headed entrance, and nave doorway with nook shafts. The re-faced chancel has aisles under lean-to roofs, with re-used 2-light Decorated windows and blind south doorway. The east wall has triple lancets separated by deep buttresses, with a small quatrefoil window in the gable. The gabled north-east vestry has diagonal buttresses.

INTERIOR: The wide triple-chamfered C13 tower arch is on polygonal responds with nook shafts and carved capitals with simple foliage. The stair turret doorway is steeply pointed. The chancel arch is also C13, on clustered shafts. Nave arcades have piers of quatrefoil section and moulded arches. Chancel arcades have octagonal piers with narrow hollow mouldings. The 1840s shallow-pitched chancel roof is panelled with moulded ribs. The east window has shafted rere arches. Butterfield's nave roof has king posts strengthened by curved struts. The roof is plastered behind principal rafters and divided into panels by moulded ribs. Walls are unplastered, except for the spandrels of nave and chancel. Above the chancel arch is polychromatic diaperwork and stone cross in relief. The floor is laid with coloured tiles and raised wood floors below the benches, and the sanctuary has encaustic tiles.

PRINCIPAL FIXTURES: The C19 font has a round bowl with a foliage frieze around the rim, said to be based on the original font. The polygonal wooden pulpit is on a stone base and has carved angels in each facet. Bench ends of 1860 have poppyheads and arm rests to the central aisle, but are otherwise square-headed. The choir stalls of 1872 have shouldered ends and frontals with open arcading. The arcaded communion rails are possibly also of 1872. Several windows have stained glass, including the fine Nativity east window by Gibbs (c1870s), north and south chancel windows by William Wailes, and the Plant family memorial window by Clayton & Bell. The church has two bells of c1400.

HISTORY: The west tower is early C13 and the arcades and chancel arch only slightly later. Chancel arcades appear to date from the erection of aisles in 1825, although it has been argued that the piers are C13 but altered in the C19. The chancel was re-faced and re-roofed in the 1840s. The original nave north aisle was taken down in 1685, but the arcade was preserved. A new aisle had been built in 1825 but it was replaced in 1860 by George Gilbert Scott (1811-78). The south aisle was rebuilt and widened in 1872 by William Butterfield (1829-99), who also heightened the nave by adding a clerestorey, with trademark polychrome interior decoration, adding a north vestry and rebuilding the porch using old masonry.

REASONS FOR DESIGNATION:
St Andrew's Church, Weston, is designated Grade II* for the following principal reasons:
* For the quality and extent of its C13 fabric, including tower, chancel arch and nave arcades
* The C13 tower is exceptional for its scale and decoration
* For the quality of the C19 restorations by Scott and Butterfield, two of the most respected Gothic-Revival church architects