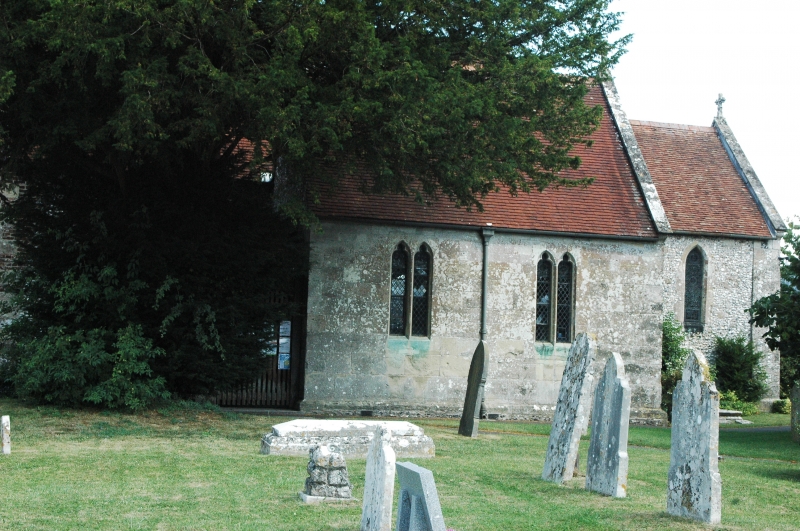 Church of England Parish: Harnham St George and All Saints

Plan: Nave and chancel, north tower (now containing the vestry) unusually sited half way down the north nave wall, two-bay chapel south of the nave, with porch to its west.

Exterior: A small country church, its Norman origin best seen from the north-east, where a round-headed window survives high up in the nave wall just east of the tower. The Norman main entrance survives to its right, but now within the tower. The chancel north wall also has one Norman slit window. Butterfield entirely rebuilt the chancel east wall with its plate-traceried two-light window, and replaced the E.E. style lancet at the north east corner of the nave. A south chapel was added in ashlar. Both windows on the south side of the chancel and all of those in the south chapel are repaired medieval lights: a triple lancet for the south chapel east, two pairs of cusped lancets in the south wall of the chapel. The south-west corner of the chapel has a medieval mass dial. Butterfield added a narrow corridor porch in flint west of the chapel, and rebuilt the south-west corner of the nave. The nave west wall is of hand-made red brick, in English bond, and the mortar has score lines indicating it was originally tuck-pointed: signs of an 18th or early 19th century rebuilding (this wall has been wrongly assigned to Butterfield, whose plans show that he only inserted a new west window). The gable was rebuilt, possibly by Butterfield. Returning to the north side, the unusual tower was rebuilt perhaps c1820, of local white stock brick from Fisherton, Salisbury, with flint chequerwork, raised pilaster strips at the angles and an oddly classical moulded cornice in brick.

Interior: Within the porch is a small horizontal squint window (reglazed in 1939), the north splay canted towards the altar. The nave roof is 19th century, the chancel has a wagon vault with panels and bosses over the sanctuary, probably 15th century. From the vestry (i.e. the tower base) to the nave is a Norman doorway with solid tympanum, one order of plain columns, and splayed capitals incised with a little upright foliage and hints of curling points at the angles - i.e. probably 12th century, showing the first signs of development towards E.E. leaf forms. The chancel has two large splays to the south windows, and a trefoil-headed piscina. The chancel arch of c1300 has triple shafted columns and a two-centred arch with two sunk quadrant mouldings. It cuts through a Norman arch-headed recess on the south side, probably part of a typical Norman arrangement for the chancel wall with matching recesses on both sides of a chancel arch, for nave altars. A plinth in front of this recess is topped by a cut-down altar slab bearing a consecration cross, perhaps from the altar originally here. The arch to the south chapel is double-chamfered and dies into the imposts. The chapel has a small Dec piscina of cusped ogee form. The small opening from the chapel to the nave was made by Butterfield as a sight-line for the organist. The floors are mostly carpeted and the underlying surface not seen.

Principal Fixtures: The high altar has a fixed stone and painted reredos of 1874, flanked by two oak panels, each side depicting the four Evangelists, all painted by Alfred Weigall of Salisbury. The centre panel is obscured by a freestanding triptych reredos by the rector's daughter Eleanor Warre, c1900-30, modelled in gesso and painted. The choir stalls, nave benches and pulpit are of oak, probably all c1874. The font is probably Norman, plain, with straight-sided bowl and a fat roll-moulding at its base. In the recess to the right of the chancel arch is part of a fine wall painting of the late 13th century, red outline work depicting the Noli Me Tangere. It was uncovered in 1873-4. In the chapel, two freestanding oak figure groups of the Presentation and Entombment, 16th century Flemish. The Jacobean-style oak reredos, all the stained glass in the south chapel, and that in the chancel east window, were designed by Eleanor Warre, c1900-1930. The chapel has a small Jacobean altar table with carved frieze and turned legs.

History: It is certain that the church was built or re-built by 1115, the date when King Henry I signed a charter granting certain churches to Salisbury Cathedral, including the church at Harnham. The chancel was lengthened in the E.E. style (i.e. during the 13th century), and probably in the early 14th century the Trinity or Jarvoise chapel on the south side was built (now the Lady Chapel). West Harnham was absorbed into the city of Salisbury in 1927.

William Butterfield (1829-99) was one of the very greatest 19th century church architects. His career flourished from the mid-1840s when he became a favourite of the influential Cambridge Camden (later Ecclesiological) Society. He was responsible in the 1850s for the great church of All Saints, Margaret Street, London which broke new ground in its use of brick and of extensive polychromy detailing. Butterfield had an astonishing fertility of invention and his work is often strikingly original, for example, in its intriguing geometry and bold colour. Apart from All Saints, his best-known work is probably Keble College, Oxford. A devout High Churchman himself, his clients were usually of similar leanings.

Reasons for Designation: The church of St George, West Harnham, is designated at Grade II* for the following principal reasons:

* Norman windows and north doorway, and probably part of a Norman arrangement for a side altar next to the chancel arch

* Good Arts and Crafts inspired glass and reredos designed and made by a rector's daughter.