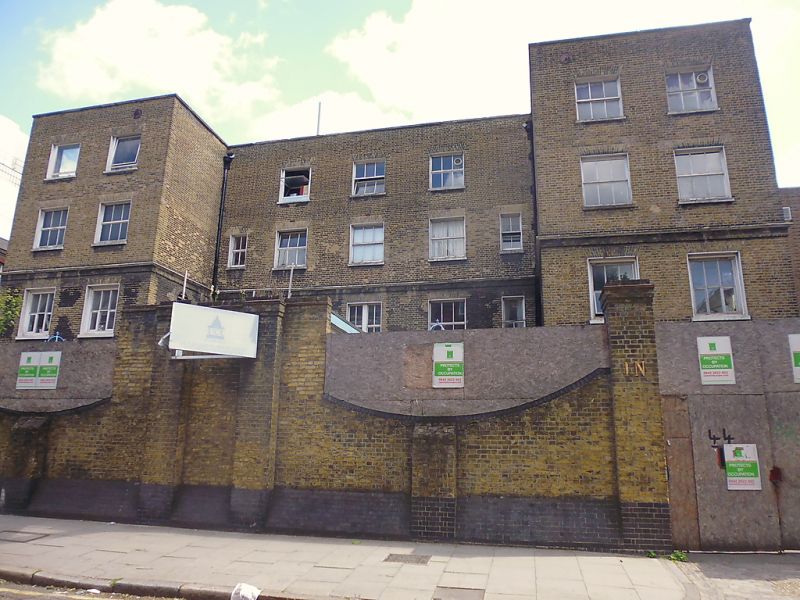 CLEVELAND STREET
44, Former Strand Union Workhouse (Middlesex Hospital Annex)
14-MAR-11
II
Former workhouse. Built after 1775 and in use by 1788 as the workhouse of the parish of St Paul, Covent Garden. Architect probably Edward Palmer. Converted into an infirmary c1870-75. Altered 1924.

The building's special interest ends at the line of the rear wall of the C18 workhouse. The later ward blocks attached to the rear, and the separate ranges to the north and south, are not of special interest.

EXTERIOR: Four storeys high Symmetrical facade of three bays flanked by projecting two-bay side wings. The central part has later narrower windows inserted to either side, except at third floor. Moulded stone string-course between first and second floors wrapping around the side of the wings and continuing as a plain brick string-course. The central entrance has modern extended porch (not of special interest). Each of the inner faces of the wings has an oculus at first floor. The roof (replaced in the C20) is concealed behind the parapet. Some window openings are altered on the side and rear elevations. Most windows are replaced, but some original 6-over-6 pane sashes remain on the north and rear elevations. The rear elevation has a brick string-course between the first and second floors.

INTERIOR: Internal plan much altered, and only vestiges survive, including the north stair compartment (the stair itself is later). A pair of arched niches flanking a chimneybreast in the ground floor may be original features. Basement not fully inspected, but is believed to retain brick vaults.

HISTORY: The Covent Garden Workhouse (as it was originally known) was built by the parish of St Paul, Covent Garden, under the St Paul Covent Garden Act (1775) replacing a building in Denmark Court (Exeter Street). The site was acquired on a lease from the Bedford Estate. The architect was probably Edward Palmer, surveyor and steward to the Duke of Bedford, who prepared earlier plans for a smaller workhouse on the site. It was finished in or before 1778, when the parish charity school had been established there. The Act stipulated that an additional burial ground be provided on the site, which was consecrated in 1788. In 1802 and 1819 tenders were obtained for building an infectious ward and an infirmary respectively, each to the design of Thomas Hardwick (these no longer survive). In 1836 the building became the workhouse for the Strand Poor Law Union, formed on 25 March 1835 under the Poor Law Amendment Act (1834) or New Poor Law which superseded the Poor Law of 1601. The Union comprised the parishes of St Paul, Covent Garden; St Mary-le-Strand; Precinct of the Savoy; St Clement Danes and the Liberty of the Rolls, joined by St Anne, Soho (1837) and St Martin-in-the-Fields (1868). The only other surviving workhouse from these parishes is that of St Anne Soho in Rose Street, now No 14 Manette Street.

The workhouse originally comprised the frontage block as seen today, with longer wings to the rear containing segregated male and female wards. At its full extent, the site comprised a pair of small receiving wards flanking the entrance gate, a chapel, further wards to the north and east; workshop ranges to the south and a wash house and laundry in the north east corner. A C19 account describes a stone relief above the entrance inscribed with the motto: 'Avoid Idleness and Intemperance'. Burials on the site had apparently ceased by the late 1850s when the laundry was built. The body of the 'Italian boy', murdered in 1831 by body snatchers Bishop and Williams or the 'London Burkers' and sold for dissection, was disinterred from among the hundreds of skeletons lying there; the case had caused a scandal and was instrumental in the passing of the Anatomy Act (1832). The Strand Union moved c1870 to a new workhouse at Edmonton, and the building was extended and converted as the infirmary for the Central London Sick Asylums District, retaining only the C18 frontage block.

Conditions at the Strand Union Workhouse were notoriously bad, and it featured prominently in the mid-C19 movement to reform the workhouse system. In 1853, the philanthropist Louisa Twining (1820-1912) visited an elderly nurse there, which prompted her influential campaign to improve workhouse conditions. In 1856, Dr Joseph Rogers (1821-1889), physician and renowned campaigner for the reform of the treatment of the sick poor, was appointed Medical Officer to the Strand Union. The dreadful conditions he encountered there - overcrowded, insanitary, with little separate provision for the sick who, like in many urban workhouses, constituted the vast majority of inmates - were to launch him on his lifelong mission as a healthcare reformer. He managed to secure some improvements, including the addition of a dispensary and separate laundry, in the face of the hostility of the Strand Guardians, who eventually dismissed him in 1868. He became Medical Officer to the Westminster Union in 1872. Rogers helped found the Association for the Improvement of London Workhouse Infirmaries (1866) and became president of the Poor Law Medical Officers' Association. In 1865 the Strand Union was named and shamed in a series of damning articles on metropolitan workhouse infirmaries published in 'The Lancet', which lauded Rogers' valiant efforts. The Strand, it stated, was 'remarkable, even among the London houses, as an illustration of the ideas according to which the accommodations of in-door paupers were originally planned'. An official inquiry of 1866 recommended the closure of several workhouses, including the Strand. Rogers was the key figure behind the Metropolitan Poor Act (1867); his campaigning also led to the provision of similar schemes in other cities. He had also helped campaign for the abolition of the window tax (1851). His obituary in The British Medical Journal (13 April 1889) read 'see the comparatively comfortable and well appointed workhouse infirmaries, and think of the reeking dens they were. Compare them thirty - nay twenty - years ago and now, and confess that if Howard was the Hercules of prison reform, as truly was Rogers the Hercules of workhouse reform'. An English Heritage blue plaque commemorates his residence at 33 Dean Street, Soho. Rogers' memoirs: Reminiscences of a Workhouse Medical Officer, were published in 1889.

A third prominent figure with historical associations here was Charles Dickens, who lived very close to the Covent Garden Workhouse at No 10 Norfolk Street, now 22 Cleveland Street, c1815-17 as a child and for a period of at least two years from 1829. Dickens corresponded with Joseph Rogers in 1866, expressing his wonder that 'the poor should not creep in corners to die, rather than fester and rot in such infamous places'. Dickens' satirical short story 'A Walk in a Workhouse' (1850) describes a perambulation through a large metropolitan workhouse in 'the parish of St So-and-So', elaborating scenes of wretchedness in this 'little world of poverty enclosed within the workhouse walls'. What can be said with some certainty is that the former Strand workhouse is the sole survivor of the C18 institutions that were still operating in London when Dickens was writing, and which were targeted for reform in the 1860s.

* Historic interest: for associations with renowned figures in mid-C19 workhouse reform, most notably Dr Joseph Rogers, whose direct experience here as Chief Medical Officer launched him into the vanguard of the movement to reform Poor Law healthcare provision, a significant step towards the socialisation of medical care in Britain. It may also have provided inspiration for workhouses portrayed by Dickens in 'Oliver Twist' and later works
* Rarity: as a survival of an C18 London parish workhouse, one of only three to remain
* Architectural interest: while much altered internally, it remains clearly legible as a late-C18 Poor Law institution, whose austere yet imposing exterior eloquently announces its original purpose.

The former Strand Union Workhouse is listed for the for the following principal reasons:

* Historic interest: for associations with renowned figures in mid-C19 workhouse reform, most notably Dr Joseph Rogers, whose direct experience here as Chief Medical Officer launched him into the vanguard of the movement to reform Poor Law healthcare provision, a significant step towards the socialisation of medical care in Britain. It may also have provided inspiration for workhouses portrayed by Dickens in 'Oliver Twist' and later works
* Rarity: as a survival of an C18 London parish workhouse, one of only three to remain
* Architectural interest: while much altered internally, it remains clearly legible as a late-C18 Poor Law institution, whose austere yet imposing exterior eloquently announces its original purpose.