A Grade I Listed Building in Upton Hellions, Devon 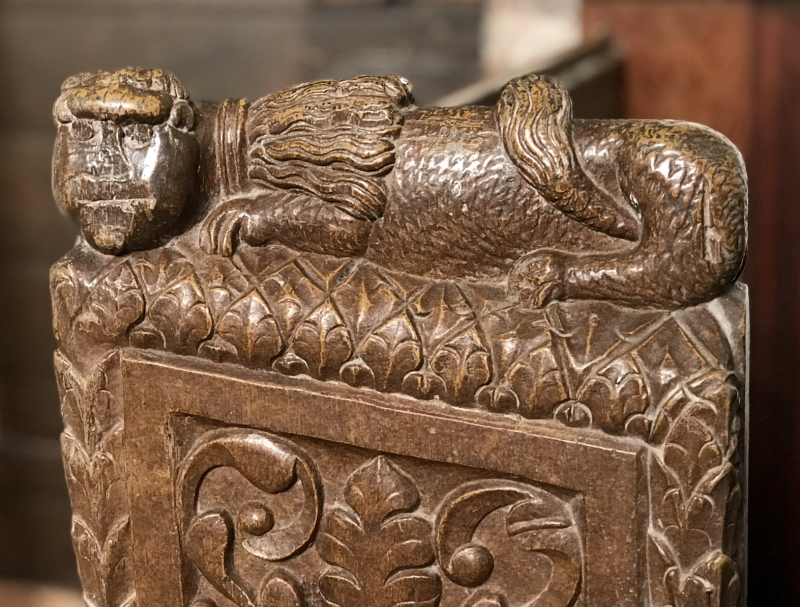 Small parish church. Late C12 nave and chancel, late C14-early C15 south porch.
Late C15 tower and early-mid C16 south aisle. Nave and chancel of random small-
stone rubble with volcanic quoins, and tower, porch and aisle of coursed, roughly-
squared volcanic and mudstone with large volcanic quoins; Beer stone and volcanic
ashlar detail; slate roofs. Plan comprises nave with smaller and lower chancel,
west tower and a relatively large south aisle east of south porch. Some late
Norman detail but most late Perpendicular. Unbuttressed west tower of 2 stages
with embattled parapet and stair turret projecting square from north side and
rising above parapet, also with embattled parapet. Volcanic 2-light belfry
windows with rounded heads and shutters on each side. West side has volcanic
flat-arched door with chamfered surround below a square-headed window with
cinquefoil heads, sunken spandrels and hoodmould in which parts of sill and sides
are volcanic and rest is probably restoration-work Beer stone. South side of
tower has small volcanic rectangular light to ringing loft above lower string
course. Gable-ended south porch to left of nave contains a 2-centred volcanic
arch with chamfered surround and pyramid stops, and a small rectangular niche
under the gable. The eastern (right) wall of the porch is now incorporated in C16
south aisle which projects further south. Its south front has two 3-light square-
headed Beer stone windows with rounded-arch heads and sunken spandrels, both
partly restored. To right between the windows is a small round-headed volcanic
arch to priests door. The east wall of the aisle and its Beer stone 3-light ogee-
headed window together with a raking buttress between aisle and chancel may well
be C19 work due to structural failure of the east abutment of the arcade. The
restored east chancel window is another Beer stone 3-light square-headed window.
The chancel gable has C19 Beer stone kneelers and coping surmounted by plain
cross. Irregularities in blind north chancel wall indicate some blockings. The
north side of the nave, projecting slightly and built higher than the chancel,
includes 2 square-headed windows. The left one is of Beer stone and has 3 ogee-
headed lights; the right is volcanic and 4-lights with flat-arched heads. The
former is possibly unrestored late C15,the latter is original early C16 work.
Good interior: south door has late Norman arch with half-engaged circular shafts
and scalloped capitals and a double segmental arch with evidence of a hoodmould
since cut back flush to wall face. It contains a C16, oak, studded plank door
with vertical, ovolo-moulded cover-strips. The plain almost round-headed tower
arch and the similar chancel arch with soffit-chamfered imposts are probably late
C12. The nave has a late C15-early C16 ceiled waggon roof with moulded ribs and
unusually primitive bosses, several of which repeat a female face (presumably St
Mary). The lower chancel has similar ceiled wagon roof but without bosses. South
aisle has early-mid C16 ceiled wagon roof with moulded ribs and elaborately carved
flat bosses. The 3-bay arcade to the south aisle (2 of which overlap the chancel)
has unusual moulded volcanic stone columns with undecorated capitals. Stabb
records a parclose screen in the easternmost arch, since gone. The flagged floor
includes several C17, C18 and C19 grave slabs. The tower has late C15 ringing
floor of intersecting chamfered beams with carved bosses and contains a rare
braced king-post bell-frame of about the same date and a C15 bell. In the west
wall of the aisle a now-blocked volcanic aperture with quatrefoil surround
formerly opened into the porch. It is of unknown function but apparently predates
the south aisle and is too low to have been a window. A W Everett suggested that
it may have served for confession if the priest sat in the porch and the penitent
spoke from the graveyard. Late C12 Beer stone font in nave near south door is a
late cushion bowl with the tops of semi-circular faces meeting on the corners.
The vertical dressing with narrow borders is probably modern work. It is mounted
on possibly C13 support comprising a central pier with 4 half-engaged flanking
shafts with simple capitals on a square volcanic stone plinth. At the back of the
nave there are 7 late C15-early C16 oak pews with carved bench ends and a bench
frontal with its carved end surmounted by a crouching lion. Early C18 oak pulpit
with fielded panel sides. Other furnishings are late C19 including Minton tile
reredos of circa 1875 which includes an unusual set of blue signs of the zodiac.
Small painted moulded plaster C18 royal arms over south door. On north side of
chancel is large early C17 mural monument in marble with traces of ancient colour
and is believed to be a memorial to Sir Richard Reynells of Lower Creedy and his
wife. Stabb gives Richard Periham a wife Mary through whom he got Upton Hellions
estate. He died 1631, she 1662. In painted marble the pair are represented
facing each other in prayer either side of a pridieu which features a skull and
hourglass. There are free-standing Ionic columns either side carrying a moulded
entablature and resting on a moulded sill on plain consoles, and between them a
plaque from which the surface and inscription have flaked off is framed in a
strapwork cartouche. Below a grey marble slab with inscribed heraldic achievement
rests against the wall. The south aisle includes C18 and C19 marble memorials
including one of 1794 to Reverend James Carington, Chancellor of the Diocese of
Exeter, which has a pediment head surmounted by a bas-relief vase.
Sources: K M Clarke, Baptismal Fonts of Devon Part 4, Trans. Devon Assoc. 51
(1919), p.220, Pl.4 Devon C19 Church Project, Church Guide by A W Everett, Some
Old Devon Churches, John Stabb, 1916.