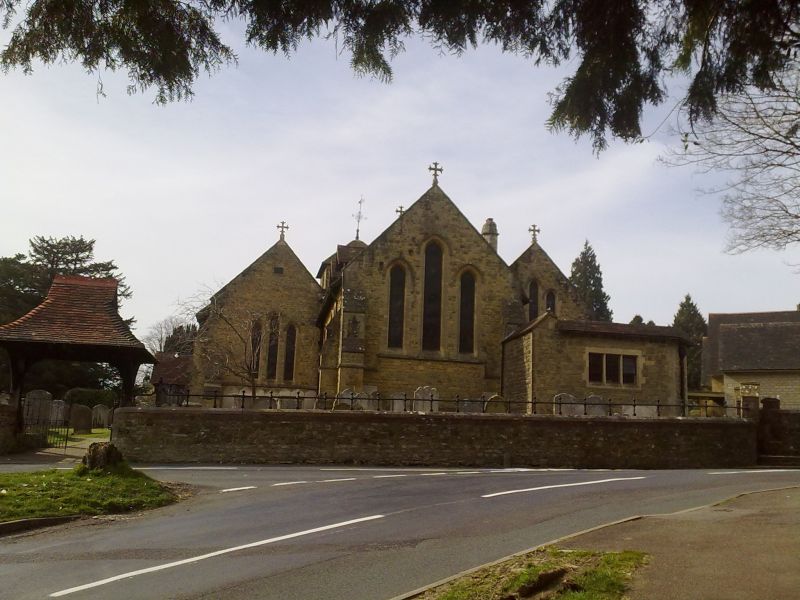 Exterior: Rock-faced rubble with tiled roofs. Old headstones have been cut into the nave walling. W tower, probably C13. Nave and chancel with 4-bay N and S aisles, separately roofed. SW porch. NE organ chamber and, to its E a later vestry projecting forward from the E wall of the church. The church is linked to a former school, now containing the parish office, on the SE side. Buttressed chancel with a stepped triple lancet. The S side of the chancel has 2 pairs of lancets and 2 probably late C19 gabled roof dormers of a domestic character with carved bargeboards and pairs of trefoil-headed timber windows. Buttressed aisles, the S aisle with a stepped triple lancet E window in the W end and 2-light plate-traceried S windows. Both aisles have a pair of lancets and quatrefoil above in their W ends. The N aisle has one lancet and plate traceried 2-light windows. A low probably C20 timber-framed porch block with hipped roof off the N wall of the aisle at its E end is connected to a link to the former school. Very plain W tower with small chamfered windows and one large lancet in the W wall. The belfry stage is later and has a pyramidal roof with a weathervane. Between the N wall of the tower and the N aisle a section of walling contains 2 doorways, one over the other, with a probably C20 flight of steps across the W wall giving access to the upper doorway. The NE vestry block has rainwater head dated 1888 but has evidently been extended later. A stack with paired polygonal chimney shafts rises against the N wall of the chancel. Late C19 or early C20 timber-framed porch with open traceried sides with later glazing. A secondary screen wall with doorway divides the porch into two.

Interior: Moulded C19 chancel arch on marble shafts on stone bases. C19 double-chamfered tower arch. Arcades with circular piers with moulded capitals and very wide double-chamfered arches. Good open crown post roof to the nave with moulded tie beams, the crown post with 2-way bracing. The aisle roofs are arch braced. The chancel roof is arch braced. The dormer windows in the chancel probably post-date the roof as the rafters extend across the openings. The E window has internal marble shafts to the openings. Reredos of three mosaic panels in a stone frame decorated with fleurons. Polychromatic alabaster and marble dado decorated with lozenges extends across the E wall on either side of the reredos. Conventional brass and timber sanctuary rail; encaustic tiles to the chancel floor. Probable late C19 choir stalls with shouldered ends, finials and frontals with a frieze of pierced trefoils. C20 choir stalls in the SE end of the S aisle. Late C19 or early C20 polygonal timber pulpit with linenfold panelled sides. Unusual 1870 polychromatic marble font with a deep moulded bowl on a short shaft with a carved capital and taller corner shafts with capitals. C19 nave benches with chunky curved ends. Gothic organ case incorporates a fine and unusual c.1900 Morris and Co tapestry of angel musicians. Panels of probably C17 Flemish glass leaded into the W window of the N aisle. Tennyson memorial window illustrating the Holy Grail by Morris and Co., designed Burne-Jones, 'dedicated by some friends and neighbours in Haslemere'. Many other C19 stained glass windows, some, including S chancel windows, of very good quality. Several early C19 and later wall plaques. Enormous alabaster wall monument to James Stewart Hodgson, d. 1899, in the chancel with 3 female figures carved in relief, signed P Cockerell and A Fabrucci.

St Bartholomew's, Waverley retains its probably C13 west tower, but it was substantially rebuilt in 1871 in the Early English style by J. W. Penfold. It has a number of interesting internal features including its good open crown post roof to the nave, a polychromatic font of 1870 and of greatest interest, a Tennyson memorial window designed by Burne-Jones and a fine tapestry on the organ chest depicting angel musicians by Morris and Co.