Church of St Thomas the Apostle 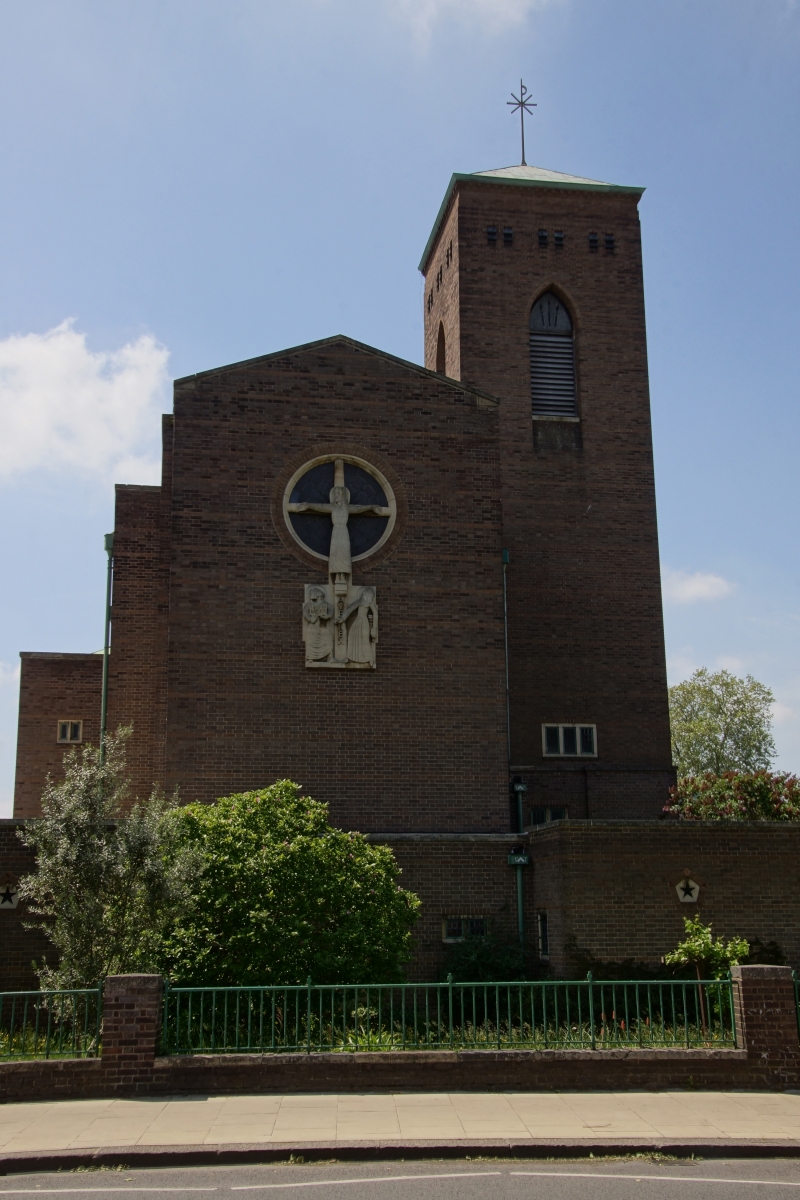 Anglican church. 1933-34 by Edward Maufe. Silver-grey Tondi brick with red bands and Weldon
stone dressings, internal vault of reinforced concrete. Seven-bay nave with passage aisles, one-bay
chancel and one-bay sanctuary with south vestries, and north chapel and children's corner, the
latter under square tower. Exterior with pointed lancet windows to main church, and
square-headed casements to lady chapel and vestries. Lancet openings to tower with spear-head
glazing, symbolic of St Thomas. East end, facing road, dominated by Eric Gill's Calvary, whose
cross forms the glazing pattern of the circular east window. Foundation stone laid 8 July 1933 by
the Earl of Jersey. Two entrance doors on north side, severely pointed, with panelled doors in
stone surrounds, one with carving of a dove, the other a pair of birds, both by Vernon Hill.
Rippled copper plates to doors; plaque with Maufe's 'seal' to left.
The interior is cool and refined, yet full of interest. Concrete groin vault over rendered buttresses
cut through with lancets to form passage aisles. The eastern and western bays of nave narrower than
the rest. West window with finely detailed glass by Moira Forsythe, behind octagonal font of
Weldon stone carved with fish, anchor and symbols by Vernon Hill, with cover of oak and ivory.
Pendant electoliers, with symbols of the twelve apostles, part of Maufe's design. The flooring of
blue and yellow linoleum, an original feature, in nave and chapels except where noted. Arches
either side of chancel denote narrow cross-axes leading south to vestries and north to side door and
chapels. Chancel and sanctuary raised, with floors of travertine. Reading desk and pulpit to either
side under arch. Chancel with choir stalls set in front of screens of angels by James Woodford.
Organ by Hedgeland brought from St Thomas's, Portman Square. Sanctuary with low oak railings,
and sedilia with acutely-pointed arches characteristic of Maufe's work. Altar designed in 1911 by
Cecil Hare brought from St Thomas's, Portman Square. Lancet openings to either side lead to small
east chapel.
The side chapels are particularly low, richly detailed spaces, in contrast to the coolness and height
of the body of the church. Children's corner under tower separated by timber screen from passage;
carvings by James Woodford depict flesh, fruit, fish, a flower and fowl. Painted reredos
incorporating local scenes by E Starling. Statue of St Christopher by Vernon Hill. Stained glass by
Moira Forsythe. Lady chapel, formerly Morning Chapel, with flat roof divided by low beams and
decorated by Katherine Roberts. Painted altar rails to 'English' altar. Stoop in narrow south-east
window. Statue of Our Lady by Vernon Hill. All Hill's statues carved of Weldon stone.
St Thomas's was paid for from the demolition of St Thomas's, Portman Square, of 1858 by P C
Hardwick. This may explain the exceptional lavishness of its design and decoration. Maufe
produced this church whilst he was working on designs for Guildford Cathedral, and it
demonstrates a working out in miniature of many of his ideas for that building. Because of its
smaller scale and more rapid completion it has been considered the more successful work.
Sources: Architects' Journal, 15 March 1934, pp.383-7; RIBA Journal, 24 March 1934, pp.524-9.