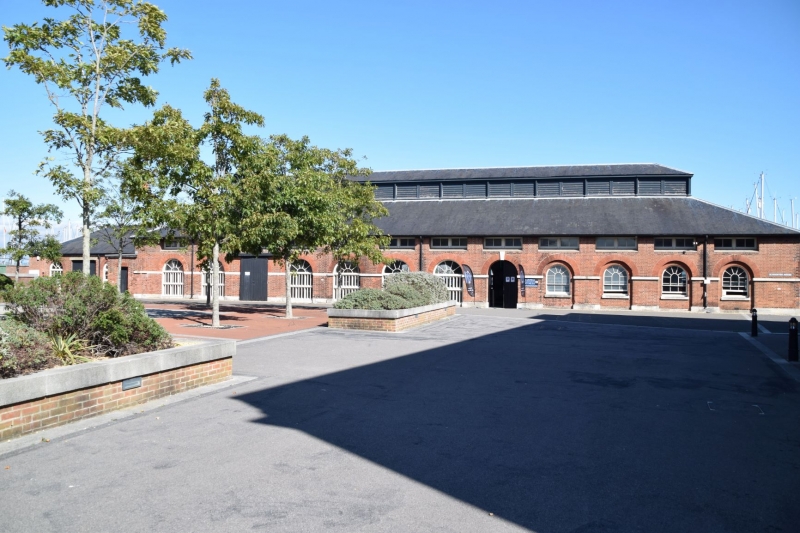 Slaughterhouse at naval victualling yard; now store. 1854 - 5. Red brick with Portland stone dressings, slate hipped roof with a ridge vent. Italianate style. Rectangular plan with N receiving house and attached large butchering house. Single storey; 3:12- window range. Stone plinth and impost band all round, the sides with an arcade of keyed round arches with matching 6/3-pane sashes, brick infill below on the W side, the E quay side has vertical timber mullions to the lower section; above are rectangular eaves lights with C20 glazing. The E side has a cast-iron swing hoist to the S end. S return has central double doors to a flat head. N block has a central double door with flanking round-arched lights, and 3-window quay side.

INTERIOR: Main section has a wide timber roof with strutted queen posts, ceiled mid C20, with cast-iron supports and braces, and fixtures for butchering and for operating the ridge louvres. N block has a timber king post roof.

HISTORY: The N section received the live beasts, and the long range was for butchering and preparing the meat. An important functional part of this large victualling yard, a butchering facility was added to the grand bakery and mill complex, opened in 1832. This is one of the first large industrial food processing plants in the country, and is indicative of the considerable scale of the navy's victualling operation, on an important site overlooking the river.

(Source: D Evans: The Granary/Mill/Bakehouse complex at the Royal Clarence Yard, with the Hydraulic Engine House and the Slaughterhouse. Report for Berkeley Homes, 2000, p.14)