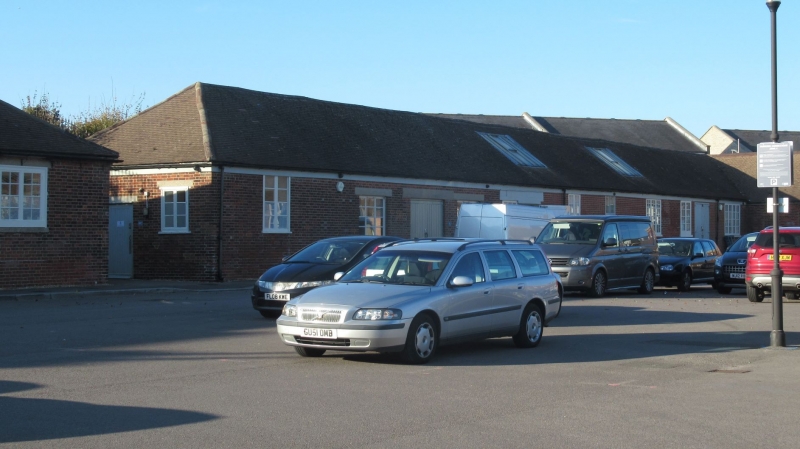 Long ranges of low one-storey buildings on three sides of an open yard, backing on a reservoir on the W side, and open to the E, built as workshops for the Royal Military Artificers. The short return at the south end housed a sawpit, and has been re-roofed, and the main long range, split at the centre for a former entrance, housed a variety of artificers' shops, including wheelwrights, coopers, bricklayers, carpenters, and, at the N end, a smithy. These two blocks are now linked by a length of the reservoir retaining wall, but here was a former gateway, and the brick gate piers remain. The S range, towards the yard, has a wide pair of plank doors towards the left, and three smaller doors centre and right, with 9 small-pane casement windows in 2 or 3 lights; there are two small ridge stacks, one near the centre and the other at the right-hand end; the returned unit, with sawpit, has two 3-light casements on its N front, with a later lean-to, and the outer, hipped end, has a wide pair of full-height plank doors. The right-hand range has a door and flanking window in the short returned end adjacent to the gateway, then 8 varied casements, including an original 4-light to the former smithy, and five varied doors, including a wide plank pair towards to the left. There are two large roof-lights near the centre of the block. This range returns at right angles to the S-facing range which originally housed carpenters, a clerk of stores, and a guardhouse - the last with separate hipped roof, but now the parts joined by a C20 flat-roofed unit where once was an entrance gateway. This range has a wide pair of plank doors, flanked by a 4-light casement, left, and a 3-light with transom, right; beyond this is a small door with overlight and five casements, all with transom, and variously two, three and 4-light. The former clerk's office has two smaller lights, set well down from the eaves. The former guardhouse has a central plank door, and varied small lights each side, all to concrete lintels, being replacements. On this unit and the link to the left is an external extractor fan with large metal stack; the returned hipped end has a plank door to segmental head. The Fire Engine House is a small free-standing rectangular building positioned with plain sides and back, but fully open front with three pairs of wide full-height plank doors to intermediate posts. The Portland stone flag floor with granite threshold remains.

Interiors: mainly out of use at time of survey (October 2000); walls are in lime washed brickwork, the lower half normally with black bitumen, and most rooms retain lime-washed or bitumen painted queen-post roof trusses, but some have later suspended ceilings. Timber roof trusses, with rafters and close boarding. The clerk's office and guardhouse are reputed to retain the arcades facing into the entrance way.

SUBSIDIARY FEATURES: Former boundary wall to Weevil Estate, later boundary wall to N end of gardens to officers' houses. 1704 and 1764. Red brick, some blue headers, in English bond. A run of approx. 85m of wall lying E/W immediately S of the North Meadow workshops (qv). The left (W) section is in a straight run, then a short canted section, immediately S of the sawpit building followed by a further straight run, this being the latter part of the work. Wall rises approx. 2.75m above the paved yard level, in 1 1/2 brick thickness, increased to 2 brick thicknesses for a series of very broad buttresses on the S side; a brick-on-edge coping crowns the wall, with two courses of a single brick thickness, then a projecting string course capped by a canted tile course.

HISTORICAL NOTE: This extensive range of buildings, designed in the late C18 and constructed in the first years of the C19, is believed to be a unique survival of workshops for the Royal Military Artificers, established in 1784, and in 1813 renamed Royal Sappers and Miners. It was probably provided to give technical and skilled labour back-up to the Weevil Brewery, and the Gosport Lines which were being remodelled in the early C19. The Artificers were carpenters and builders engaged in the construction of military buildings and fortresses. The entrance from the W was later blocked when the reservoir was made. A fire engine house was added to the N range as a free standing block in 1811. The workshops continued in original use until the site was transferred to the Admiralty in 1829 as part of the newly-created Royal Clarence Yard. The barracks which formerly closed the E side of the courtyard have disappeared, but the remaining buildings form part of a significant group with the Bakery and Mill (qv), and the Hydraulic Engine House (qv), to the E.

The initial development of the area, in the early C18, housed a Brewery and Weevil House, both now demolished, and the area occupied by Flagstaff Green. The wall is the oldest remaining above-ground structure on the Royal Clarence Yard site. The later section of the wall may contain material salvaged from the demolition of Weevil house and the old brewery. A specification for the 1764 section is given in Evans (ADM 110/22)