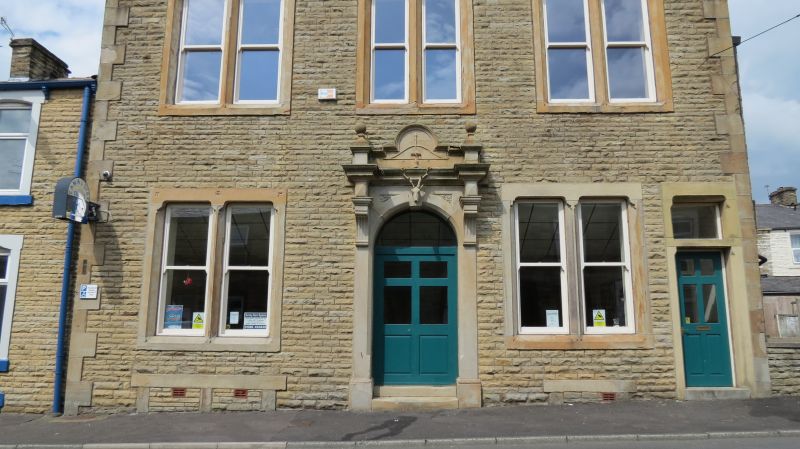 Working mens' club, probably a branch of the Ancient Order of
Foresters. Dated 1876 on shield in gable; altered. Coursed
rock-faced sandstone rubble with quoins (roof not visible but
probably slate). Rectangular plan at right-angles to street.
2-and-a-half storeys over cellars, a gabled 3-window facade,
with raised quoining to the corners, a band across the gable,
and gable coping (stepped over the band) with kneelers and an
apex finial. The ground floor has a tall round-headed doorway
in the centre, with a chamfered surround, a stag's head
mounted on the keystone, and an elaborate corniced entablature
including a horizontal bow-and-arrow flanked by ball-finials;
another tall doorway next to the right-hand corner, with a
plain stone surround and a rectangular overlight; and 2 large
2-light mullioned windows with chamfered stone surrounds,
shouldered lights and altered glazing. The 1st floor has 3
similar windows; the gable has 2 pairs of blind round-headed
lights with keystones, flanking a stone shield with lettering
which is now illegible except for "est 1876", and a blind
keyed oculus above the band.
INTERIOR not inspected.
HISTORY: the Foresters were the 2nd largest of the numerous
friendly societies which flourished in Lancashire during the
C19. Included as a good example of the type.