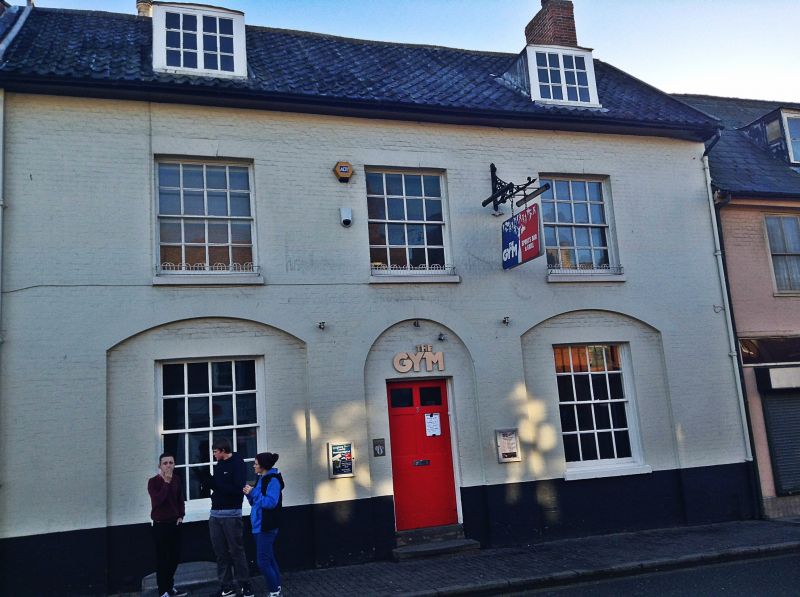 Formerly known as: The Waggon Inn RISBYGATE STREET.
House, now a public house. C19 front; C16 and C17 interior.
Timber-framed and formerly jettied; fronted in painted brick;
C20 pantiles.
EXTERIOR: 2 storeys, attics and cellars. 3 window range:
16-pane sashes in plain reveals. The ground storey windows are
set in shallow segmental-arched recesses and the central
doorway is in a semicircular arched recess. 2 segmental-headed
dormers have 2-light small-paned casement windows. A long wing
extends at the rear.
INTERIOR: front range in 2 bays with a central cross entry bay
between them. To left and right of the entry the main beams
have multiple roll-mouldings with a cresting above, running
leaf carving on the soffit and run-off stops. The joists have
ogee and roll-mouldings and run-off stops. In the cross-entry
the main beam has roll-mouldings, also on the soffit, and the
joists double roll mouldings.
On the left of the entry the studs of the partition wall are
exposed with the infill removed: an original doorway remains
with spandrels missing and traces of a roll-moulded surround.
2 later doorways have been inserted. Mouldings and a cresting
continue round the left room.
A chimney-stack on the rear wall has a plain lintel and a
rounded back to the brickwork. The room to the right of the
entry has a large rebuilt gable-end stack with a flat lintel,
moulded on the soffit. The C17 rear range has some plain
ceiling beams exposed. The upper storey is said to have no
exposed framing.