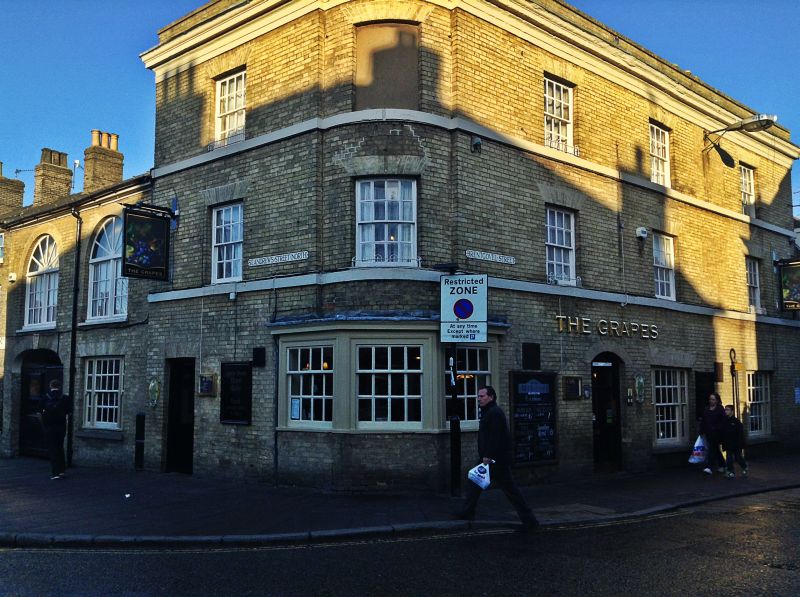 Includes: The Grapes Public House ST ANDREW'S STREET NORTH.
Public house. Early to mid C19. White brick and slates.
EXTERIOR: 3 storeys and cellars; on a corner site with a
return front to St Andrew's Street. A plain parapet with stone
copings and a heavy stucco cornice. Raised stucco bands
between the 1st and 2nd storey windows. A cast-iron hanging
inn sign projects from the 1st storey front.
3 window range to Brentgovel Street: 12-pane sashes to the 1st
and 2nd storeys, all in cased frames with deep reveals and
flat gauged arches. Low cast-iron railings remain across some
sills. 2 tripartite sash windows to the ground storey have
16-pane central lights and diminished 4-pane side lights. A
segmental-arched brick surround to the doorway; door with 2
leaves and a low segmental-arched fanlight with spoke
glazing-bars. The slightly recessed quadrant corner has a
blocked window to the 2nd storey, a 16-pane sash to the 1st
storey and a C20 canted bay to the ground storey with 3
12-pane sash windows.
On the St Andrew's Street frontage a single sash window to
each of the upper storeys in the same style as the Brentgovel
Street front and a small door with a flat arch over.
Adjoining on the north, a 2-storey block with a canted corner
has 2 large 2-light small-paned casement windows to the upper
storey with semicircular heads and radiating glazing-bars. A
similar arched opening on the corner was blocked and contains
a later large-paned sash window; another blocked window
opening on the ground storey. One tripartite sash on the
ground storey and a wide carriage entrance with double doors:
this has an elliptical brick arch with a raised keystone
bearing the date 1837 and the letters TB.
Adjoining this part of the complex is a timber-framed rear
range at right angles to the street, apparently originally
jettied, but later converted to stabling on the ground storey
with the upper storey now supported on a series of brick
arches facing into the inn yard. Extensive cellars below the
building with walling in brick and flint.