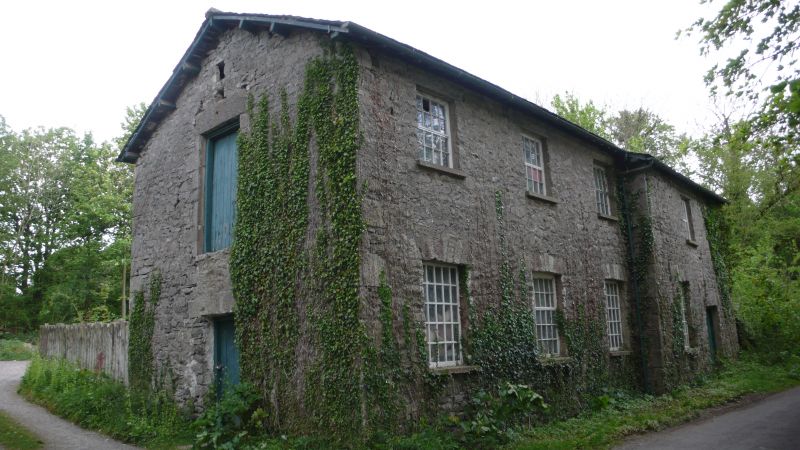 Workshop complex, formerly part of gunpowder works. Mid to late C19 with minor C20 alterations, empty at the time of inspection (October 1998). Random rubble limestone with ashlar dressings beneath Westmorland slate roof coverings, laid to diminishing courses. PLAN: U-shaped complex, comprised of central range with turbine house and workshop to east, and flanking workshops to north-west and south-west. Centre range with remains of tall turbine house to north end, including buttressed north-east corner. 2-storeyed range of 5 bays extends southwards, with four tall glazing bar Windows, 5 x 4 panes, beneath wedge lintels. Upper floor with four smaller glazing bar sashes, eight-over-eight panes. The bays to the north end, which are narrower than the adjacent bays, break forward, with doorway to right. Small square ridge chimney. Turbine house set against asymmetrical gable of 5-bay range. End wall with set~offs to stepped buttress on east side, and semi-circular arched opening for water from adjacent channel to enter turbine chamber within, via wooden pentrough set within the arch. This has a large-diameter cast-iron pipe rising from its base to carry water into the turbine chamber below. Rising from the turbine house, a vertical shaft with horizontal bevelled gear wheel which engages with vertically set wheel and a horizontal drive shaft extending eastward to north-west workshop. This is single-storeyed with 3 wide ground floor openings beneath flat arched heads with rough voussoirs to east wall, 2 now blocked and the third with half-glazed double doors. Similar pattern of openings to rear wall. South-west workshop aligned east-west is a stepped 3-bay single storey range with off-centre off-shut to north side. Taller 2-bay part has slated central ridge louvre. South wall with 3 doorways with flat arched heads. North wall with wide doorway to west end, with wall-mounted wooden bending frame to right. Off-shut to left of door with triple workshop window with glazing bars, that to the cast end blocked.

HISTORY: This powered workshop complex formed part of the Sedgewick Powder Works, and providing support and maintenance facilities including cooperage, fitters shop, sawmill and blacksmiths and boilermakers shop, with a water-powered turbine fed from the network of watercourses used to power other parts of the powder works. The Sedgewick Powder Works is the most complete of the surviving works in Cumbria, an important centre of the industry in the late C19. Such works are characterised by highly-dispersed layouts of manufacturing buildings, often separated by blast banks. However, support buildings, such as the workshops, sawmill and turbine house could, as in this instance, be grouped together. The survival of so complete a complex is very unusual.