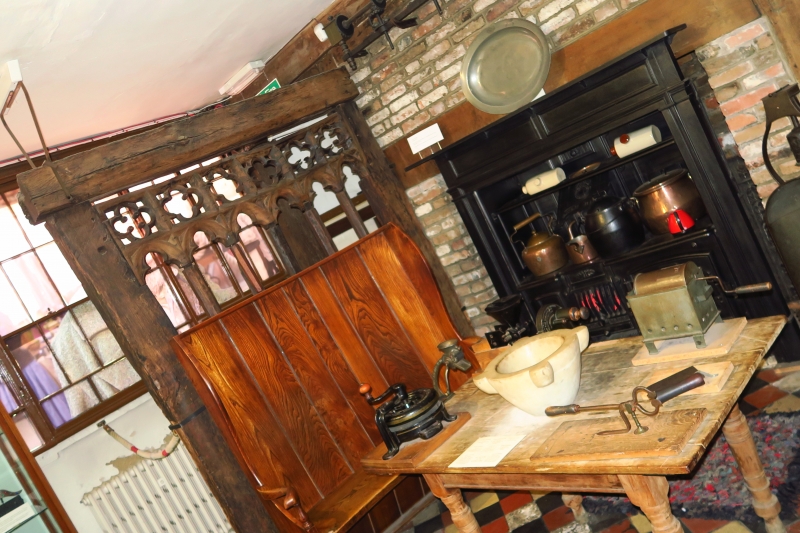 Merchant's house. c1500, probably for a master clothier; C17
addition at rear heightened in C18; other minor alterations
and additions of various dates; 1933 restored and converted
for use as folk museum for Gloucester City Council. Timber
frame with some original panels of oak staves woven with laths
and daubed with red clay and straw; some rendering to front
and rear; brick addition at rear; two brick stacks, plain tile
roof to front range, pantile roofs at rear.
PLAN: the house comprised the front range of three framed and
originally cross-gabled bays and a rear wing of four framed
bays, with a through passage under the front range from the
street to an alley on the east side of the wing; a courtyard
on the west side of the wing; two shops in the front range
were originally separated by a passage leading from the street
to the courtyard; in the front range three rooms on each upper
floor, in the rear wing a large and a small room on each floor
separated by a chimney-stack with a fire-place to each of the
rooms; within the rear wing at its junction with the front
range, a C20 oak staircase replacing the smaller original
staircase; in C17 the courtyard area at rear of the front
range infilled by a range on the west side of the wing and
heightened in C18.
EXTERIOR: three storeys and attics, a stone walled cellar
below each of the original former shops; on the front the
first and second floors are jettied, the ground floor is
divided into four bays and a narrow entrance into the passage
on the east side by storey posts; five of the six posts are
original, the fifth post from the east is a C20 insertion and
replaces a post further east which formed one side of the
doorway to the passage between the former shops; the bays
infilled in C20 with timber-framed windows with Tudor-arched
heads and glazing bars with a doorway incorporated into the
window in the third bay from the east; the fronts of the

original posts retain evidence of slender attached shafts with
chamfered bases and moulded caps with decorative cresting
carved out of the solid; from the tops of the caps curved knee
braces support the first floor jetty; the posts to either side
of the passage to the alley on the east side are carved with
stopped jamb mouldings, inserted between them a C20 door frame
with turned balusters in a panel above timber panelled doors.
The upper floors of three framed bays with intermediate rails
and close studding; on the first-floor in the east and the
central bays an oriel window of three-light casements with
single side-light casements; originally part of a continuous
run of casements across the front of the house; the moulded
bressumer to the first floor jetty and the moulded
intermediate rail break forward across the fronts of the
oriels each of which has moulded corner posts and moulded
cornices below the second-floor jetty; the former casement
openings to either side of the oriels are now infilled; all
the casements have rectangular leadlight glazing; the wider
west bay is rendered between the storey posts and has two
inserted C18 sashes with glazing bars (3x4 panes); between the
sashes a central rectangular stucco panel with a moulded frame
and inscribed "BISHOP HOOPER'S LODGING".
On the second floor a deep moulded bressumer to the jetty;
close studding between the storey posts, the two secondary
posts in the wider west bay, and the intermediate rails; on
the faces of the storey posts evidence of a slender shafts
under knee brackets which supported the former jettied attic
cross gables and replaced in C18 by a moulded cornice; in both
the east and the central bays and to each side of the west bay
a small C18 sash with glazing bars (3x2 panes).
On the east side beyond the passage under the front range the
rear wing of four bays with storey posts rising to the jetty
of the third storey, all the floors with close studding and
intermediate rails on the ground and first floors, some
evidence of some original doors and windows, otherwise several
inserted C18 sashes; on the south gable-end of the wing the
original second floor jetty removed and the wall rendered; the
gable-end to the C17 and C18 also rendered.
INTERIOR: on all floors much of the timber-framing exposed
including chamfered bridging beams and joists, some timbers
retaining original dark red paint finish; in the rear wing on
the ground floor wall plaster painted with fleur-de-lys and
Tudor roses; on the first floor the larger chamber has remains
of wall painting of white grotesques on a black ground, and a
fireplace with a stone-stop chamfered surround.
The house traditionally believed to have been the lodging for
Bishop Hooper before his execution by burning at the stake on
the site of his monument in St Mary's Square (qv), on 9